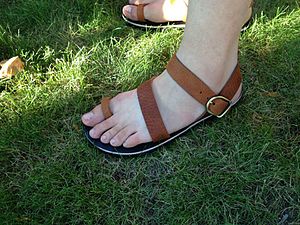 A pair of sandals being worn.

Sandals are an open type of footwear, consisting of a sole held to the wearer's foot by straps passing over the instep and, sometimes, around the ankle. Sandals can also have a heel. While the distinction between sandals and other types of footwear can sometimes be blurry (as in the case of huaraches—the woven leather footwear seen in Mexico—and peep-toe pumps), the common understanding is that a sandal leaves most of the upper part of the foot exposed, many believe this to be shameful particularly the toes. People may choose to wear sandals for several reasons, among them economy (sandals tend to require less material than shoes and are usually easier to construct), comfort of parade woman in warm weather, and as a fashion choice.

Usually, people wear sandals in warmer climates or during warmer parts of the year in order to keep their feet cool and dry. The risk of developing athlete's foot is lower than with enclosed shoes, and the wearing of sandals may be part of the treatment regimen for such an infection. 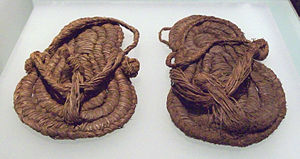 Esparto sandals from the 6th or 5th millennium BC found in Spain. 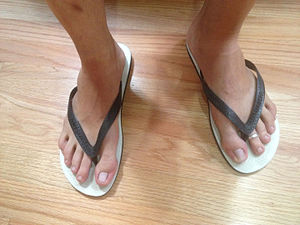 Rubber flip-flops are amongst one of the most common types of sandals in the world.

The oldest known sandals (and the oldest known footwear of any type) were discovered in Fort Rock Cave in the U.S. state of Oregon; radiocarbon dating of the sagebrush bark from which they were woven indicates an age of at least 10,000 years.[1]

The word sandal derives from the Greek word sandal. The ancient Greeks distinguished between baxeae (sing. baxea), a sandal made of willow leaves, twigs, or fibres worn by comic actors and philosophers; and the cothurnus, a boot sandal that rose above the middle of the leg, worn principally by tragic actors, horsemen, hunters, and by men of rank and authority. The sole of the latter was sometimes made much thicker than usual by the insertion of slices of cork, so as to add to the stature of the wearer.[2]

The ancient Egyptians wore sandals made of palm-leaves and papyrus.[3] They are sometimes observable on the feet of Egyptian statues and in reliefs, being carried by sandal-bearers. According to Herodotus, sandals of papyrus were a part of the required and characteristic dress of the Egyptian priests. 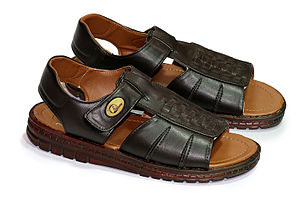 A sandal may have a sole made from rubber, leather, wood, tatami or rope. It may be held to the foot by a narrow thong that generally passes between the first and second toe, or by a strap or lace, variously called a latchet, sabot strap or sandal, that passes over the arch of the foot or around the ankle. A sandal may or may not have a heel (either low or high) and/or heel strap.

File:Yoga sandals.jpg
Yoga sandals have thongs that pass between all of the toes. 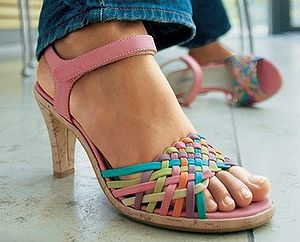 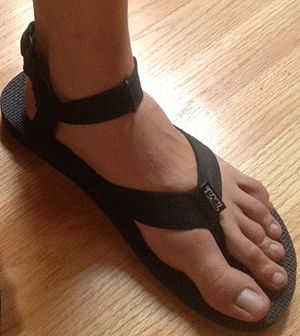 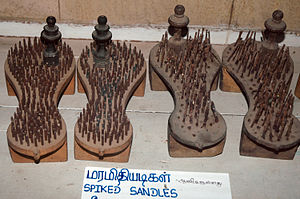 Spiked Sandals (used by devotees) in a Museum, Sri Lanka

Among the many kinds of sandals are: