From Infogalactic: the planetary knowledge core
Jump to: navigation, search
This article is about the Roman army officer. For the animated television series, see The Centurions (TV series). For other uses, see Centurion (disambiguation). 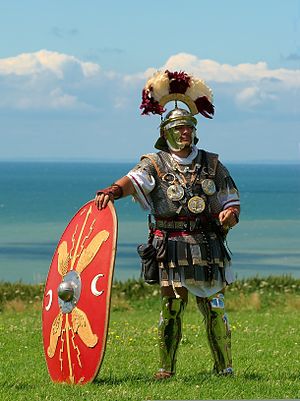 A historical reenactor in Roman centurion costume. Note the transverse crest on the Galea (helmet). It was worn to indicate the wearer's rank in regimental 'triumph' and honorific parades. Its purpose was purely symbolic. It was not part of the standard battle-dress of Roman soldiers in the field.

A centurion (Latin: centurio; Greek: κεντυρίων, kentyríōn, or ἑκατόνταρχος, hekatóntarkhos) was a professional officer of the Roman army after the Marian reforms of 107 BC. Most centurions commanded groups of centuries of around 80 men [5] but senior centurions commanded cohorts or took senior staff roles in their legion. Centurions were also found in the Roman navy. In the Byzantine Army, they are also known by the name kentarch (κένταρχος, kentarchos).[6] Their symbol of office was the vine staff, with which they disciplined even Roman citizens protected from other forms of beating by the Porcian Laws. 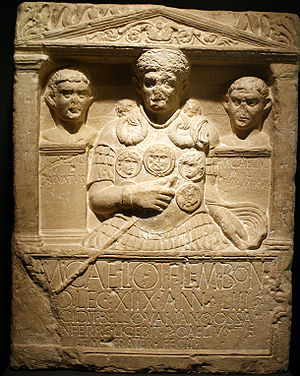 In the Roman infantry, centurions initially commanded a centuria or "century". Centuries, or centuriae, developed from the Roman tribal system under the Servian reforms and could contain 200 to 1000 men. Later, generals and Caesars further manipulated these numbers with double and half-strength units. Julius Caesar, for instance, made the first century double strength.

Centurions seemed to receive a much higher rate of pay than the average legionary, twice as much or more (possibly as much as 17 times as much as a legionary soldier[7]). Veteran legionaries often worked as tenants of their former centurions.[8]

During the Imperial era, centurions gradually rose in seniority in their cohort, commanding centuries with higher precedence, until commanding the senior century and therefore the whole cohort. The very best centurions were then promoted to become centurions in the First Cohort, called Primi Ordines, commanding one of the ten centuries and also taking on a staff role. The most senior centurion of the legion was the Primus Pilus who commanded the first century. All centurions, however senior, had their own allocated century. There was little difference between the ranks of centurions except for the Primus Pilus. The Primus Pilus also participated in war councils.[9]

The Primus Pilus was so called because his own century was the first file (primus pilus) of the first (rightmost) cohort. Only eight officers in a fully officered legion outranked the Primus Pilus: the legate (legatus legionis), commanding the legion; the senior tribune (tribunus laticlavius), second-in-command of the legion; the Camp Prefect (praefectus castrorum); and the five other tribunes (tribuni angusticlavii), who apparently served as senior staff officers to the legate with a rank roughly equivalent to a modern Colonel.

Comparisons between the centurion grades and modern officer ranks can lead to many incorrect assumptions. Centurions could be elected, appointed by the Senate, or promoted "from the ranks" for a variety of reasons.[4] Julius Caesar is said to have promoted his centurions for displays of valor. Other historians cite examples of them being the first over the enemy's wall or through the breach. If this case were strictly so, then there would be a lack of centurions in peacetime garrisons, which is where the Roman Army mostly spent its time.[3] Nonetheless, although not directly comparable to modern ranks, the various centurion grades may be loosely compared to modern junior and middle officer grades.[10][11] A modern captain is typically in command of roughly 200 men and, although he controlled far less weaponry, a centurion would typically have command over a company of similar size.

Centurions often suffered heavy casualties in battle, generally fighting alongside the legionaries they commanded. They usually led from the front, occupying a position at the front right of the century formation. They could be identified by the transverse horse-hair crest on top of their helmet, their metal greaves and (unlike the legionaries) the sword worn on the left, like all Roman officers.[12] They led and inspired their men by example. They also sought to display the skill and courage that may have brought them to their rank in the first place.

Being held personally responsible for the training and discipline of the legionaries under their command, centurions had a well-deserved reputation for dealing out harsh punishment. In The Annals, Tacitus tells the story of one known as 'Cedo Alteram' - which roughly translates to 'Fetch Me Another': "The mutinous soldiers thrust out the tribunes and the camp-prefect; they plundered the baggage of the fugitives, and then killed a centurion, Lucilius, to whom, with soldier's humour, they had given the nickname 'Cedo Alteram', because when he had broken one vine-stick across a soldier's back, he would call in a loud voice for another... and another."

The vine-stick mentioned above by Tacitus was called a vitis; it was a symbol of the centurion's authority and the implement with which he would mete out punishment.

Evidence suggests that centurions had important social status and held powerful positions in society. They seem to have received their status according to their rank.[13] On retirement they could be eligible for employment as Lictors.[14]

Each century had a precedence within the cohort. Centurions' seniority within the cohort and legion depended on the position within the legion of the century they were in charge of, which often took their name from their centurion. Centurions began by leading junior centuries before being promoted to leading a more senior one. Promotion usually came with experience, or at least length of service, but many still never made it as far as leading a 1st cohort. Yet for centurions who showed, say, particularly conspicuous bravery during battle, there was the opportunity to be promoted several grades at once. For example, Julius Caesar's reward for a centurion who had greatly pleased him was to advance him eight grades.[12] Promotion through the various grades often meant transferring to another legion.

The precedence during the times of the manipular legion, commanding sixty men, was organized like this:

For the imperial legion they were organized (in order of who advanced first);

There were five centuries in the first cohort, each century with twice the number of soldiers of a normal century. All first-cohort centurions outranked all centurions from other cohorts.

The qualities necessary for the centurion

Centurions had to be literate (to be able to read written orders), have connections (letters of recommendation), be at least 30 years of age, and had already served a few years in the military.

The centurion in the infantry is chosen for his size, strength and dexterity in throwing his missile weapons and for his skill in the use of his sword and shield; in short for his expertness in all the exercises. He is to be vigilant, temperate, active and readier to execute the orders he receives than to talk; Strict in exercising and keeping up proper discipline among his soldiers, in obliging them to appear clean and well-dressed and to have their arms constantly rubbed and bright.

Centurions in the New Testament

Matthew's Gospel and Luke's Gospel [16] relate an incident in which a servant of a centurion based in Capernaum was ill. In the Gospel of Luke, the centurion concerned had a good relationship with the elders of the local Jewish population and had funded the development of the synagogue in Capernaum, and when he heard that Jesus was in the locality, he asked the Jewish elders to request healing for his servant. In the Gospel of Matthew, the centurion makes direct contact with Jesus. The stories report that Jesus marveled at his faith and restored his servant to health.

The book of Acts [17] tells of a centurion named Cornelius whose righteous and generous acts find favor with God. The apostle Simon Peter is told in a vision to visit Cornelius, a Gentile, with whom association was not permitted under Jewish law. The encounter leads Simon Peter to understand that God accepts non-Jews who believe in God and repent. After this revelation, the message of Jesus was evangelized to the Gentiles.