Sarah Jessica Parker (born March 25, 1965)[2] is an American actress, producer, and designer. She is best known for her leading role as Carrie Bradshaw on the HBO television series Sex and the City (1998–2004). She was also an executive producer on the show, and won two Emmy Awards, for Outstanding Comedy Series in 2001 and Outstanding Lead Actress in a Comedy Series in 2004.

Parker made her Broadway debut in 1976 aged 11, in the revival of The Innocents, before going on to star in the title role of the Broadway musical Annie in 1979. She then appeared in the 1984 films Footloose and Firstborn. She returned to Broadway in the 1989 play The Heidi Chronicles.

Sarah Jessica Parker was born in Nelsonville, Ohio, the daughter of Barbara Parker (née Keck), a nursery school operator and teacher, and Stephen Parker, an entrepreneur and journalist.[3][4] She was one of a total of eight children from her parents' marriage and her mother's second marriage (her full siblings include actors Timothy Britten Parker and Pippin Parker). After her parents' divorce, her mother married Paul Forste, a truck driver and account executive who was a part of Parker's life from an early age.[5] Parker's father, a native of Brooklyn, was of Eastern European Jewish background; his family's original surname was "Bar-Kahn" ("son of Kohen").[4][6] Parker's mother was of German, and some English, descent; through her mother, Parker is descended from Esther Elwell, one of the accused during the Salem witch trials.[4][7] Parker has identified culturally with her father's religion, Judaism, although she has had no religious training. She has said that even while her family lived in Cincinnati, her mother emulated a New York lifestyle.[6]

As a young girl, Parker trained in singing and ballet, and was soon cast in the Broadway revival of William Archibald's The Innocents.[8] Her family moved to Cincinnati and then to Dobbs Ferry, New York, near New York City, so that she could get specialized training. There, her mother and stepfather helped Parker develop her career as a child actress. In 1977, the family moved to the newly opened planned community on Roosevelt Island, in the East River between Manhattan and Queens, and later to Manhattan. The family later moved to Englewood, New Jersey, where Parker attended Dwight Morrow High School.[9] 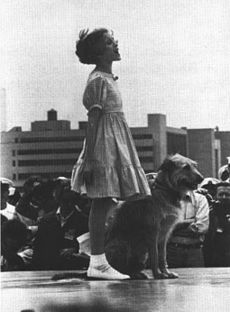 Parker during a USO show aboard USS Iwo Jima, 1979

Parker and four siblings appeared in a production of The Sound of Music at the outdoor Municipal Theatre (Muny) in St. Louis, Missouri.[13] She was selected for a role in the new 1977–81 Broadway musical Annie: first in the small role of "July" and then succeeding Andrea McArdle and Shelley Bruce in the lead role of the Depression-era orphan, beginning March 1979. Parker held the role for a year. In 1982, Parker was cast as the co-lead of the CBS sitcom Square Pegs. The show lasted just one season, but Parker's performance, as a shy teen who showed hidden depths, was critically well received. In the three years that followed, she was cast in four films: the most significant being Footloose in 1984 and 1984's Girls Just Wanna Have Fun, co-starring Helen Hunt. In 1986, Parker appeared in the cult classic Flight of the Navigator, a Disney science fiction film.[14]

In 1991, she appeared in a supporting role in the romantic comedy L.A. Story; both the movie and her performance garnered positive reviews.[8] The following year, she landed a starring role in the well-received film Honeymoon in Vegas, co-starring Nicolas Cage. Her role of Sarah Sanderson in Disney's Halloween film Hocus Pocus was a higher grosser at the box office but received negative reviews. Also in 1993, she starred as a police diver opposite Bruce Willis in the film Striking Distance. The following year, she appeared opposite Johnny Depp in the critically acclaimed movie Ed Wood[8] as Wood's girlfriend Dolores Fuller. The film Miami Rhapsody, in 1995, was a romantic comedy in which she had a leading role. In 1996, she appeared in another Tim Burton-directed movie, Mars Attacks!, as well as in The First Wives Club and The Substance of Fire, in which she reprised her 1991 stage role. In 1997, she appeared as Francesca Lanfield, a washed-up former child actress, in the comedy Till There Was You.[15] 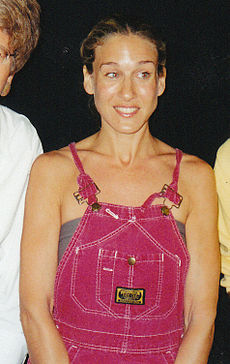 Parker at the rehearsal for the 1999 Emmy Awards

The script for an HBO drama/comedy series titled Sex and the City was sent to Parker. The show's creator, Darren Star, wanted her for his project. Despite some doubts about being cast in a long-term television series, Parker agreed to star.[16] After five nominations, in 2004, Parker won an Emmy Award for her lead role. Parker said in 2006 that she "will never do a television show again."[16][17]

After Sex and the City ended in 2004, rumors of a film version circulated. It was revealed that a script had been completed for such a project. At the time, Parker said such a film would likely never be made.[18] Two years later, preparations were resumed, and the film was released on May 30, 2008. A sequel to the movie, Sex and the City 2, was released in 2010.[19][20]

In addition to work in film and television, Parker has gained respect as a stage actor, having appeared in well-reviewed lead roles in the off-Broadway play Sylvia, alongside future husband Matthew Broderick in How to Succeed in Business Without Really Trying, and the Tony Award-nominated Once Upon a Mattress. In December 2005, Parker appeared in her first film in several years, The Family Stone; she received a Golden Globe nomination as Best Actress — Comedy for the role. Her next film, the romantic comedy Failure to Launch, co-starring Matthew McConaughey, was released on March 10, 2006, and opened at #1 in the North American box office, grossing slightly over $24 million on its opening weekend,[21] despite mediocre reviews.[22] Parker's work as a producer continued with the independent film Spinning into Butter (which she also starred in), based on the Rebecca Gilman play.[23]

On July 20, 2006, U.S. cable network Bravo announced it had picked up a reality show produced by Parker under the working title American Artist.[24] Parker participated in the United States version of the hit U.K. television series Who Do You Think You Are? for NBC, in which celebrities were helped to trace their family trees. The executive producer was Lisa Kudrow, and the series featured Parker, husband Matthew Broderick, Kudrow and others.[25]

Parker guest starred on Glee as Isabelle Wright, a Vogue executive who takes Kurt Hummel under her wing after he graduates and moves to New York. Parker runs her own production company, Pretty Matches, which has been creating content for HBO and other channels since 2009.[26] The company is currently running a web series called "City.Ballet" that takes viewers behind the scenes with dancers of the New York City Ballet.[27]

In 2000, Parker hosted the MTV Movie Awards, appearing in fourteen different outfits during the show.[28] She has also become the face of many of the world's biggest fashion brands through her work in a variety of advertising campaigns. In August 2003, Parker signed a lucrative deal with Garnier to appear in TV and print advertising promoting their Nutrisse hair products.[29] 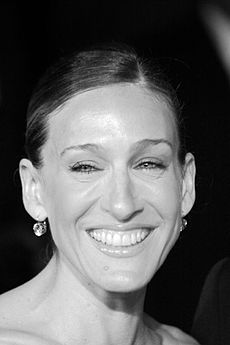 In early 2004, shortly after the last season of Sex and the City wrapped up, Parker signed a $38 million contract with the Gap.[30] It was the first multi-season contract in the clothing company's history, in which Parker was to appear in their upcoming fall ads, and continue until the Spring of 2005.[30] The endorsement sparked many levels of criticism from the public; the glamorous, urban-chic fashionista that her character Carrie Bradshaw has branded her with, was ironic considering the Gap maintains an image that does not promote high-end fashion.[31] Wendy Liebmann, president of WSL strategic retail, suggested that the Gap "felt the need for an iconic but contemporary face to represent [themselves]. . . . they were perhaps feeling a little insecure, a little in need of some high luster around the brand".[30] However, the ad campaigns were a success, and Parker had given the Gap a new, fresh face that appeared in many commercials, online and print ads, and other promotions.[32]

In March 2005, Parker's contract with the Gap ended, and was replaced with then 17-year-old British soul singer Joss Stone. A rising star at the time, Stone's replacing of Parker was a puzzling move to the public. The company then stated that "While Gap will always seek partnerships with celebrities, musicians and rising stars, we don't have any future plans to sign a single person to a multi-season deal like the unique and special relationship we enjoyed with Sarah Jessica".[33]

Parker released her own perfume in 2005, called "Lovely".[8] In March 2007, Parker announced the launch of her own fashion line, "Bitten",[34] in partnership with discount clothing chain Steve & Barry's.[35] The line, featuring clothing items and accessories under $20, launched on June 7, 2007, exclusively at Steve and Barry's.[36]

In July 2007, following the success of "Lovely," Parker released her second fragrance "Covet." In 2007, Parker was a guest on Project Runway for the second challenge.[37] In 2008, Covet Pure Bloom was released as continuous series of Covet.[38] In February 2009, as part of the "Lovely" collection, Parker launched a series of three new fragrances called "Dawn", "Endless", and "Twilight".[39]

On February 28, 2014, Parker started the SJP Collection, a footwear line, at Nordstrom.[40] She Instagrammed herself overstepping the chain residents on 66 Perry Street put up to prevent overcrowding and unwanted visits to the now-famous address to promote the line, angering neighbors.[41]

In June 2015, she was named the new spokesmodel for Jordache Jeans.[42]

Parker was romantically involved with actor Robert Downey, Jr. from 1984 until 1991. They met on the set of Firstborn. Downey had a drug problem, which affected their relationship. Parker has said, "I believed I was the person holding him together."[43] She later briefly dated John F. Kennedy Jr.[44] before meeting and eventually marrying Matthew Broderick.[45] 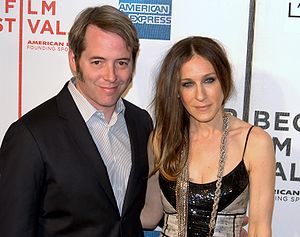 Matthew Broderick and Parker in 2009

On May 19, 1997, she married actor Matthew Broderick, to whom she was introduced by one of her brothers at the Naked Angels theater company, where they both performed.[46] The couple married in a civil ceremony in a historic synagogue on the Lower East Side in Manhattan. The couple's son, James Wilkie Broderick, was born in 2002.[47] Parker and Broderick's twin daughters, Marion Loretta Elwell and Tabitha Hodge, were delivered via surrogate in June 2009. Their middle names of "Elwell" and "Hodge" are from Parker's mother's family, which she discovered while researching her ancestry for the first episode of Who Do You Think You Are?[48][49] As of 2009, she lives in New York City with her husband, son, and daughters. They also spend considerable time at their second home near Kilcar, a village in County Donegal, Ireland, where Broderick spent summers as a child.[50] According to a March 2013 interview with the Net-a-Porter online magazine The Edit: "Parker runs her own production company, is on the board of The New York City Ballet, is a UNICEF Ambassador and fundraises for New York schools."[51]

Parker appeared in the premiere episode of the U.S. version of Who Do You Think You Are? on March 5, 2010, where she discovered she had ancestors involved in the California Gold Rush of 1849–50 and in the Salem Witch Trials of 1692.[48]