From Infogalactic: the planetary knowledge core
Jump to: navigation, search
For the Melbourne branch of the club, see Melbourne Savage Club.

The Savage Club, founded in 1857, is a gentlemen's club in London. An associated Masonic lodge was established in 1887.

George Augustus Sala (ca. 1860) sent out the invitation letters to the founding meeting of the club in 1857.

The founding meeting of the Savage Club took place on 12 October 1857, at the Crown Tavern, Vinegar Yard, Drury Lane, after a letter by pro tempore honorary secretary George Augustus Sala was sent to prospective members.[2] The letter advised it would be 'a meeting of gentlemen connected with literature and the fine arts, and warmly interested in the promotion of Christian knowledge, and the sale of exciseable liquors' with a view to 'forming a social society or club'.[2] The inaugural gathering would also decide upon the new association's 'suitable designation'.[2]

Andrew Halliday, joint honorary secretary in 1858, and later club president, wrote in his 1867 history, of how the 'suitable designation' was determined:[4]

'When about a dozen of our original members were assembled in the place selected for their meeting, it became a question what the Club should be called. Everyone in the room suggested a title. One proposed the “Addison”, another the “Johnson”, a third the “Goldsmith”, and so forth. At last, after we had run the whole gamut of famous literary names of the modern period, a modest member in the corner suggested the “Shakespeare”. This was too much for the gravity of one of the company (the late Robert Brough) whose keen sense of humour enabled him, in the midst of our enthusiasm, to perceive that we were bent on making ourselves ridiculous. “Who are we,” he said, “that we should take these great names in vain? Don’t let us be pretentious. If we must have a name, let it be a modest one - that signifies as little as possible.”

Whereupon a member called out, in a spirit of pure wantonness, “The Savage”. Robert's sense of humour was once again tickled. “The very thing!” he exclaimed. “No one can say that there is anything pretentious in assuming that name. If we accept Richard Savage as our Godfather, it shows that there is no false pride in us.” And so, in a frolicsome humour, our little society was christened the “Savage” Club.'

Many of the original members were drawn from the ranks of bohemian journalists and writers for the The Illustrated London News who considered themselves unlikely to be accepted into the older, arts related Garrick Club, but, within two decades, the Savage Club itself had become 'almost respectable'.[5] The early requirement - 'a working man in literature or art' - was soon broadened to include musicians, and the club's first piano was hired in 1871, prompting Halliday to tell another member 'Hang your piano... it's ruining the Club'.[6]

The club has hosted a variety of guests over the years including American writer and humorist Mark Twain,[7] and the Australian cricket team during its 1934 English tour.[8] In 1940, Oswald Mosley, founder of the British Union of Fascists, arrived as a guest of Henry Williamson, author of Tarka the Otter, but was asked to leave.[9] The club features in Arthur Conan Doyle's classic novel, The Lost World.[10]

The club moved from its original home at the Crown Tavern, the next year to the Nell Gwynne Tavern. In 1863 it moved to Gordon's Hotel in Covent Garden, then to 6-7 Adelphi Terrace, later to 9 Fitzmaurice Place, Berkeley Square, London W1, and, from 1936 to the end of 1963, Carlton House Terrace in St James's (previously the home of the Conservative statesman Lord Curzon).[11] The club is currently based in the National Liberal Club, at 1 Whitehall Place, London SW1.

In 1962, the club had around 1,000 members,[11] at present, there are approaching 300. The club maintains a tradition of regular dinners for members and their guests, always followed by entertainment, often featuring distinguished musical performers from the club's membership.[12] Several times a year members invite ladies to share both the dinner and the entertainment — sometimes as performers. On these occasions guests always include widows of former Savages, who are known as Rosemaries (after rosemary, a symbol of remembrance). 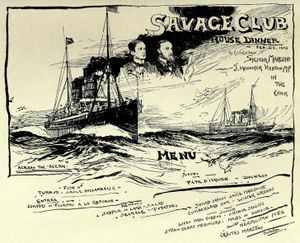 Menu card for a dinner in honour of the inventor of the radio, Guglielmo Marconi, in 1903.

There are also monthly lunches, which are followed by a talk given by a member or an invited guest on a subject of which he has specific expert knowledge.

Members are classified into one of six categories which best describes their main interest: art, drama, law, literature, music or science.[1][12] They must be proposed and seconded by two existing members, and if unknown by any other members, are required to attend a club function in order to meet some members. The category of membership might mirror a member's profession, though there are many members with an interest in one or more of the membership categories, but who practise none professionally. There is a range of membership fees depending on membership category.

During the weekend, members are permitted to use the East India Club in St James's Square. There are also reciprocal arrangements with other clubs internationally.[1] Members of the Savage club may also use accommodation at the Savile, Farmers, Lansdowne and Cavendish Clubs. 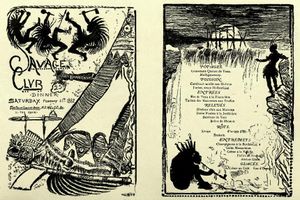 Menu card for a dinner in honour of the Prince of Wales (later Edward VII) in 1882. 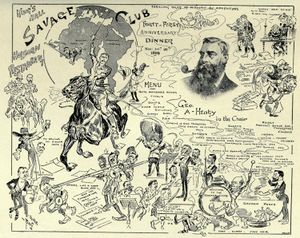 Menu card for a dinner in honour of Lord Kitchener of Khartoum in 1898.

On 11 February 1882, the Prince of Wales (later Edward VII), attended a dinner in his honour at the Savage Club, before becoming a member.[23] The Prince suggested a Masonic lodge, associated with the club, should be formed.[24]

The Savage Club Lodge received its Warrant of Constitution on 18 December 1886,[25] and was consecrated on 18 January 1887,[26] with war correspondent Sir John Richard Sommers Vine as the first Master.[27] The first treasurer was the actor Sir Henry Irving, followed by the actor Edward O'Connor Terry in 1888.[16] This tendency towards the arts continued to be reflected in the Lodge's membership for many years.[24]

The club and lodge are no longer joined but members of each share regular dinners and social functions.[26] Lodge membership is not restricted to Savage Club members, however most who join still have a professional life in literature, art, drama, music, science or law.[26]

Founders of the Savage Club Lodge