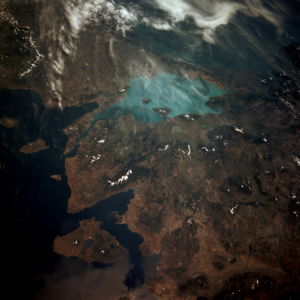 Photograph of the Sea of Marmara from space (STS-40, 1991). The sea is the light-colored body of water. 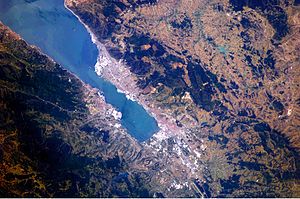 This astronaut photograph highlights the metropolitan area of Izmit along the northern and eastern shores of the Sea of Marmara, at the end of the Gulf of Izmit. 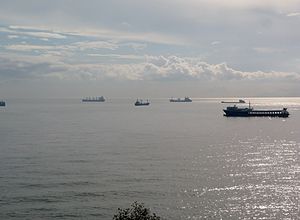 Sea of Marmara - From the dining room of the Rákóczi exile

The Sea of Marmara /ˈmɑːrmərə/ (Turkish: Marmara Denizi, Greek: Θάλασσα του Μαρμαρά), also known as the Sea of Marmora or the Marmara Sea, and in the context of classical antiquity as the Propontis (Greek: Προποντίς), is the inland sea, entirely within the borders of Turkey, that connects the Black Sea to the Aegean Sea, thus separating Turkey's Asian and European parts. The Bosphorus strait connects it to the Black Sea and the Dardanelles strait to the Aegean. The former also separates Istanbul into its Asian and European sides. The sea has an area of 11,350 km² (280 km x 80 km)[1] with the greatest depth reaching 1,370 m (4,490 ft).

The sea takes its name from the island of Marmara, which is rich in sources of marble, from the Greek μάρμαρον (marmaron), "marble".[2]

The sea's ancient Greek name Propontis derives from pro- (before) and pontos (sea), deriving from the fact that the Greeks sailed through it to reach the Black Sea, Pontos. In Greek mythology, a storm on Propontis brought the Argonauts back to an island they had left, precipitating a battle where either Jason or Heracles killed King Cyzicus, who mistook them for his Pelasgian enemies.[3]

The surface salinity of the sea averages about 22 parts per thousand, which is slightly greater than that of the Black Sea but only about two-thirds that of most oceans. The water is much more saline at the sea bottom, averaging salinities of around 38 parts per thousand — similar to that of the Mediterranean Sea. This high-density saline water, like that of the Black Sea itself, does not migrate to the surface. Water from the Susurluk, Biga (Granicus) and Gonen Rivers also reduces the salinity of the sea, though with less influence than on the Black Sea. With little land in Thrace draining southward, almost all of these rivers flow from Anatolia.

The sea contains the archipelago of the Princes' Islands and Marmara Island, Avşa and Paşalimanı.

The south coast of the sea is heavily indented, and includes the Gulf of Izmit (Turkish: İzmit Körfezi), the Gulf of Gemlik (Turkish: Gemlik Körfezi) Gulf of Bandırma (Turkish: Bandırma Körfezi) and the Gulf of Erdek (Turkish: Erdek Körfezi). During a storm on December 29, 1999, the Russian oil tanker Volgoneft broke in two in the Sea of Marmara, and more than 1,500 tonnes of oil were spilled into the water.

The North Anatolian fault, which has triggered many major earthquakes in recent years, such as the August and November 1999 earthquakes in Izmit and Düzce, respectively, runs under the sea.

The International Hydrographic Organization defines the limits of the Sea of Marmara as follows:[4]

On the West. The Dardanelles limit of the Aegean Sea [A line joining Kum Kale (26°11'E) and Cape Helles].

On the Northeast. A line joining Cape Rumili with Cape Anatoli (41°13'N).

Towns and cities on the Marmara Sea coast include:

Media related to Sea of Marmara at Wikimedia Commons