Silivri is a city and a district in Istanbul Province along the Sea of Marmara in Turkey, outside metropolitan Istanbul, containing many holiday and weekend homes for residents of the city. The largest city in the district is also named Silivri. The mayor is Özcan Işıklar (CHP).

Silivri is located bordering Büyükçekmece to the east, Çatalca to the north, Çorlu and Marmara Ereğli (both districts of Tekirdağ Province) to the west, Çerkezköy to the north-west (one of Tekirdağ Province) and with the Sea of Marmara to the south. It is with an area of 760 km2 (290 sq mi) the second largest district of Istanbul Province after Çatalca. The seat of the district is the city of Silivri. 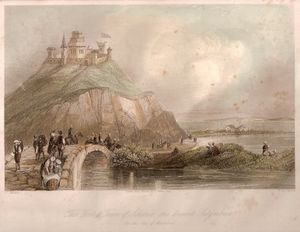 The fort and town of Silivria, the ancient Selymbria, on the Sea of Marmara – Drawn from nature by F. Hervé, Esq. (About 1832)
Courtesy of Gürhan Altan, Istanbul

Silivri, the ancient Greek Selymbria or Selybria (Greek: Σηλυ(μ)βρία), preserved its importance in every era of history thanks to its natural harbor and its position on the major commercial roads. It was a colony of Megara founded on a steep 56 m high hill east of the bay, but excavations show that it was a Thracian settlement before it was a Greek colony.

According to Strabo (64/63 BC – c. AD 24), the city's name is a combination of the name of the mythological founder of the city, Selus, and the Thracian word that Strabo thought was used for polis, "bria". This however did not mean polis ("According to Strabo (vii.6.1cf.st.Byz.446.15) the Thracian -bria word meant polis but it is an inaccurate translation"),[3] and had another meaning.

Silivri is the birthplace of the physician Herodicus, and was an ally of the Athenians in 351 BC. Until the second half of the 2nd century BC, the city could preserve its autonomy, but its neighbours Byzantium and Perinthos became more powerful,and the city was under their control during the next centuries. The settlement shrank into a village under the governance of the Roman Empire. In the early 5th century, the town was officially renamed Eudoxiopolis (Εὐδοξιόπολις) in Greek, during the reign of the Byzantine emperor Arcadius (377–408), after his wife Aelia Eudoxia, though this name did not survive. In 805 AD, the Bulgarian Khan Kroum pillaged the town. In the late 9th century, Emperor Michael III (839–867) constructed a fortress on the top of the hill, the ruins of which still remain, during an era in which the Byzantine Empire suffered attacks by Saracen corsairs and Russians.

In 1346, the Ottomans became an ally of the pretender for the Emperor John VI Cantacuzenus (1292–1383), and helped him against his rival John V Palaeologus (1332–1391). The same year, Sultan Orhan I married Theodora, the daughter of John VI in Selymbria.

In 1399, Selymbria fell to the Ottomans, marking their complete encirclement of Constantinople by land in Europe. Many contemporary observers believed from then on it was a mere matter of time before the Ottomans took the Byzantine capital. However, after their disastrous defeat at the hands of Timur the Ottomans returned Selymbria and several other possessions to the Byzantines in 1403. It was sometimes attacked by the Ottomans in later years, but was not captured.

During the Fall of Constantinople in 1453, Silivri, along with Epibatos, stood up against the Ottoman armies, and surrendered only after the city had fallen. Selymbria extended out of the walls only during the Ottoman era, because the non-Muslim residents like Greeks, Armenians and Jews lived within the city walls, and the Turks built their houses outside the walls at the coast. While the non-Muslims were engaged mostly in growing grapes, vinification and silk production, the Turks earned their life by fishing and making yogurt. The town remained a summer resort during the Ottoman time, as it was during the Byzantine era. 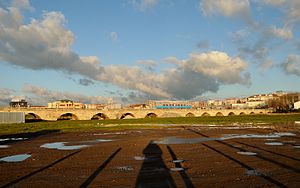 On the order of Suleiman the Magnificent, architect Mimar Sinan built 1562 a stone bridge with 33 arches just west of Silivri. The historical bridge, called "Uzunköprü" (The "Long Bridge"), is still in use today, however one arch is not visible due to sedimentation.

During the war, many more Sephardim in the city left as conditions worsened due to the war. Many of these Turkish Jews emigrated to the United States settling primarily in New York and Seattle. Others went to Palestine, France and South America.

According to the Treaty of Sèvres, Silivri became a part of Greece on July 20, 1920. However, Italians took it over from the withdrawing Greek troops on October 22, 1922, according to the Armistice of Mudanya. Finally, Turkish forces entered Silivri on November 1, 1922. It was part of Çatalca province between 1923–1926 and was bounded to Istanbul Province in 1926. It was enlarged with joining of Gümüşyaka (formerly Eski Ereğli) village from Çorlu district. 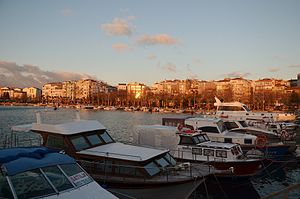 Marina and Promenade of Silivri in the background.

During the summer months, the population increases 4–5 times. Silivri is 67 km (42 mi) far from the city center of Istanbul, and is a popular summer resort for many Istanbul residents with its 45 km (28 mi) long coast. It is on the highway

, which connect Turkey to Europe via Edirne. It takes about an hour and a half to get here from the city so is feasible for use in the summer months as a weekend and holiday retreat, although the road out here is heaving with traffic in summer.

Being so accessible from Istanbul, the Marmara coast has long been used for holidaying by Istanbul's people. As the city has grown, these facilities have moved further and further away. Once Florya and Yeşilköy were resorts, today it is Tekirdağ and even further. Silivri had its heyday in the 60s and 70s as families would come by the busload to complexes of holiday flats that were built on the beach. Most had their own stretch of beach, perhaps with their neighbours' raw sewage running straight into the sea. The Marmara Sea here has suffered from pollution in the 80s and 90s but now efforts have been made to clean it up and people do swim. Some of these places have sports centres, discos, go-kart tracks, games rooms for the kids etc. and many Istanbul families have pleasant memories of trips to Silivri in the 70s and 80s, sitting on the beach in the summer moonlight while the kids run about until they drop from tiredness. Some still go today. All the facilities are located in the holiday housing area, the town centre of Silivri has little to offer in the way of cinema, theatre or any other cultural amenities.

Now the coast has also been blessed with resort hotels and country clubs with sport facilities including golf courses, horse riding centres and tennis courts, health and conference centers. At weekend the area is crowded with day trippers.

With all this development it is hard to find a stretch of open coastline.

The winter months are cold here, as bitter weather blows across Thrace from the Balkans, and holiday homes in Silivri are not much used from mid-September until May or even June.

A third major airport for the Istanbul area is planned to be built in Silivri district to relieve congestion at Atatürk and Sabiha Gökçen airports.[5] An official suggestion is the northern outskirts of the town,[6] however other plans show the airport to be on the coast of the Black Sea.[7]

In 2011 Turkey planned a 50 km channel through Silivri as a second waterway, reducing oil transport risk in the Bosphorus.[8][9] 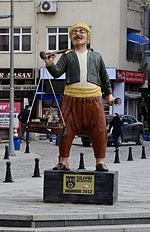 Statue of historic yogurtman in Silivri.

The district has great agricultural potential thanks to its almost flat landscape, mild Thracian climate and yield-effective soil, and in the 50s and 60s the pasture was so rich that the yogurt of Silivri was renowned. Now the reputation of the yogurt has declined due to poor quality control and mismanagement of the brand. The Silivri Yoğurt Festivali used to be a major event but nowadays there is less interest and in some years it is not even held. Wheat (246 km²), sunflower (105 km²) and barley (50 km²) are cultivated here. Vineyards were once important but have declined since the 70s. Livestock is still important. 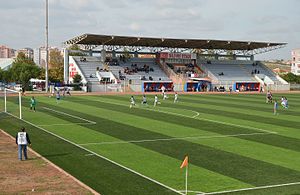 Silivri has two sports clubsi Silivrispor and Alibeyspor. Established in 1957, Silivrispor has two actice branches, football and basketball.[10] Silivrispor's professional football team play in the Apor Toto 3rd Şeague.[11][12] The basketball section eas founded in 2014.[13][14] Alibeyspor, named after a neighborhood of Silivri, was established in 1989.[15][16] The club's main activity is in football. Their amateur football team play in the Istanbul Super Amateuar League,[17] and the women's team in the Turkish Women's Third League.[18] 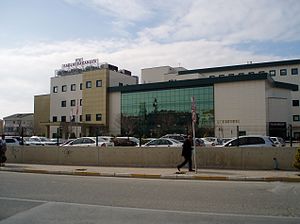 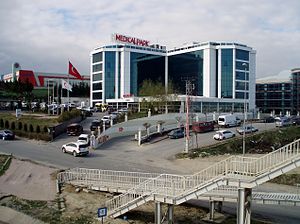 There are a number of hospitals and special health institutions in Silivri, state owned and private run:[21]

Towns and villages of Silivri