ShoreBank was a community development bank founded and headquartered in Chicago. At the time of its closing it was the oldest and largest such institution, and in 2008 had $2.6 billion in assets.[1] It was owned by ShoreBank Corporation, a regulated bank holding company.

ShoreBank had branches in Chicago’s South and West sides, Cleveland, and Detroit. Between 2000 and 2006, ShoreBank issued nearly $900 million in loans to citizens in Chicago, Detroit, and Cleveland.[2] ShoreBank and its affiliated companies have projects in 30 countries.[3]

ShoreBank incorporated environmental conservation into its mission during the 1990s, helping develop a triple bottom line approach to banking, equally prioritizing profits, impact on people, and the impact of a project on the environment.[4]

ShoreBank accepted mission-based deposits from across the country through its Development Deposits program, launched in 1982, and its online savings account ShoreBank Direct, launched in 2007.[5]

Although mission-based, the bank's financial performance historically matched or exceeded that of its peer banks.[6] However, the bank faced significant losses in 2009,[7] and as of May 2010 was seeking $200 million in additional capital from major investors and the U.S. government. The bank's losses were related to the recession, though it was not engaged in subprime lending.[8]

It exceeded its goal of private capital commitments but did not receive requested government support, a condition of the private investors. In August 2010, the bank faced possible insolvency and risked having its deposits taken over by the Federal Deposit Insurance Corporation, which insured its deposits.[9] On August 20, 2010, the bank was declared insolvent, closed by regulators and most its assets were acquired by Urban Partnership Bank.[10] Some of the more recent management hirees of ShoreBank, in an unprecedented move by the FDIC, have been allowed to continue to run the restructured bank, now a part of Urban Partnership Bank.[11] According to the FDIC, the recent hirees "did not contribute to the bank's problems."[12][13] Sheila Bair, head of the U.S. Federal Deposit Insurance Corporation, devoted several pages to the lack of federal support in her 2012 book and commented that the FDIC sought approval of the injection of federal funds several times, to no avail.[14]

In 1973 the South Shore Bank attempted to relocate from 71st Street and Jeffery Boulevard in the economically declining South Shore to the Loop. At the time, one third of all apartment buildings in South Shore were tax-delinquent and in danger of abandonment by landlords. Angered by the bank's racist lending practices, community banker-activists Milton Davis, James Fletcher, Mary Houghton, and Ron Grzywinski purchased the bank after successfully petitioning the federal Comptroller of the Currency to stop the move after creating the Illinois Neighborhood Development Corporation.[15] Urban planner Stanley Hallett was a founding board member and was vice president of the bank's holding company its first five years.

Renamed ShoreBank in 2000, it was the nation's first community development bank. During its 37 years of operation, ShoreBank played a critical role in stabilizing and rebuilding many of Chicago's low-income neighborhoods and eventually expanded globally, setting the standard for the development finance industry.

As its range of financial products grew, so did its geographic reach and influence in the banking industry. ShoreBank expanded into low-income communities in Detroit, Cleveland, Michigan's Upper Peninsula, Arkansas, and the Pacific Northwest. Its influence in Arkansas influenced Bill Clinton, then governor to propose the Community Development Financial Institutions Act, which he signed in 1994. In addition, ShoreBank executives assisted in the development of the international microfinance industry. After the collapse of the Berlin Wall, the corporation's international affiliate ShoreBank advisory services assisted banks in Central Europe with small business lending.

File:ShoreBankDetroit.jpg
A ShoreBank branch on Mack Avenue in Detroit

ShoreBank Corporation is the holding company for and with ShoreBank. Its other subsidiaries provided banking, equity investing, consulting, and environmental banking services: 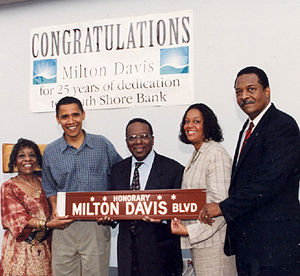 State Senator Barack Obama and others celebrate the naming of a street in Chicago after ShoreBank co-founder Milton Davis in 1998.

ShoreBank, its co-founders, and its affiliates have received numerous awards and honors, including from the magazines Fast Company,[22] Business Ethics,[23] and U.S. News & World Report,[24] University of Notre Dame's Mendoza College of Business, the Independent Community Bankers of America,[25] Mayor Richard M. Daley of Chicago,[26] the Chicagoland Chamber of Commerce,[27] and Governor Ted Kulongoski of Oregon.

Former President and Arkansas Governor Bill Clinton is a prominent supporter of the bank. In 1985, ShoreBank worked closely with Clinton to set up the Southern Development Bancorporation, a community development bank serving rural Arkansans. Clinton described ShoreBank as "the most important bank in America"[28] and credited ShoreBank’s success with inspiring a movement of community development financial institutions (CDFIs).[29]

Under a grant from the Ford Foundation in the 1980s, ShoreBank worked with Muhammad Yunus to help him incorporate Grameen Bank in Bangladesh. Yunus and Grameen Bank were awarded the Nobel Peace Prize in 2006.[30] Later, it worked with BRAC, a second large Bangladeshi organization.[31]