From Infogalactic: the planetary knowledge core
Jump to: navigation, search
This article is about the neighborhood. For the Chicago "L" trackage, see The Loop (Chicago Transit Authority).

The Loop is the central business district of Chicago, Illinois. It is one of the city's 77 designated community areas. The Loop is home to Chicago's commercial core, City Hall, and the seat of Cook County. The community area is bounded on the north and west by the Chicago River, on the east by Lake Michigan, and on the south by Roosevelt Road, although the commercial core has significantly expanded into adjacent community areas. As a business center, some of the corporations the Loop is home to include the Chicago Mercantile Exchange (CME), the world's largest options and futures contracts open interest exchange; the headquarters of United Continental Holdings, one of the world's largest airlines; AON; Blue Cross Blue Shield; Hyatt Hotels Corporation; BorgWarner, and dozens upon dozens of other major corporations. The Loop is home to Grant Park; State Street, which hosts a major shopping district; the Art Institute of Chicago; several theaters; and numerous subway and elevated rapid transit stations. Other major institutions in the Loop include the Willis Tower,once the tallest building in the world, the Chicago Symphony Orchestra, the Lyric Opera of Chicago, the Goodman Theatre, the Joffrey Ballet, the central public Harold Washington Library, and the Chicago Cultural Center.

In what is now the Loop, on the south bank of the Chicago River, near today's Michigan Avenue Bridge, the US Army erected Fort Dearborn in 1803. It was the first settlement in the area sponsored by the United States. In 1908, Chicago addresses were made uniform by naming the intersection of State Street and Madison Street in the Loop as the division point for designating addresses, North, South, East or West on the Chicago street grid.

It is believed the origin of the term Loop is derived from the cable car turning loops in the downtown area, and especially those of two lines that shared a loop, constructed in 1882, bounded by Adams, Wabash, Wells, and Lake.[2][3] Other research has concluded that "the Loop" was not used as a proper noun until after the 1895–97 construction of the Union elevated railway loop.[4] 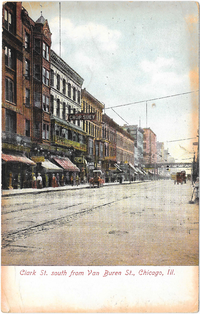 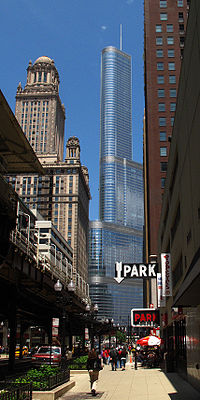 Loop architecture has been dominated by skyscrapers and high-rises since early in its history. Notable buildings include the Home Insurance Building, considered the world's first skyscraper (demolished in 1931); the Chicago Board of Trade Building, a National Historic Landmark; and Willis Tower, the world's tallest building for nearly 25 years. Some of the historic buildings in this district were instrumental in the development of towers. Chicago's street numbering system – dividing addresses into North, South, East, and West quadrants originates in the Loop at the intersection of State Street and Madison Street.

Chicago is still the nation's rail transportation hub and passenger lines once reached seven Loop-area stations by the 1890s. Transfers from one to the other was a major business for taxi drivers until the long-distance lines gave way to Amtrak in the 1970s with the majority of trains concentrated at Chicago Union Station.

This area abounds in shopping opportunities, including the Loop Retail Historic District, although it competes with the more upscale Magnificent Mile area to the north. It includes Chicago's former Marshall Field's department store location in the Marshall Field and Company Building; the original Sullivan Center Carson Pirie Scott store location (closed February 21, 2007). Chicago's Downtown Theatre District is also found within this area, along with numerous restaurants and hotels.

Chicago has a famous skyline which features many of the tallest buildings in the world as well as the Chicago Landmark Historic Michigan Boulevard District. Chicago's skyline is spaced out throughout the downtown area, giving it a graceful beautiful appearance. The Willis Tower, formerly known as the Sears Tower, the second tallest building in the Western Hemisphere, stands in the western Loop in the heart of the city's financial district, along with other buildings, such as 311 South Wacker Drive and the AT&T Corporate Center.

Chicago's third tallest building, the Aon Center, is located just south of Illinois Center. The complex is at the east end of the Loop, east of Michigan Avenue. Two Prudential Plaza is also located here, just to the west of the Aon Center.

The Loop contains a wealth of outdoor sculpture, including works by Pablo Picasso, Joan Miró, Henry Moore, Marc Chagall, Magdalena Abakanowicz, Alexander Calder, and Jean Dubuffet. Chicago's cultural heavyweights, such as the Art Institute of Chicago, the Goodman Theatre, the Chicago Theatre, the Lyric Opera at the Civic Opera House building, and the Chicago Symphony Orchestra, are also in this area, as is the historic Palmer House Hilton hotel, found on East Monroe Street.

Chicago's waterfront, which is almost exclusively recreational beach and park areas from north to south, features Grant Park in the downtown area. Grant Park is the home of Buckingham Fountain, the Petrillo Music Shell, the Grant Park Symphony (where free concerts can be enjoyed throughout the summer), and Chicago's annual two-week food festival, the Taste of Chicago, where more than 3 million people try foods from over 70 vendors. The area also hosts the annual music festival Lollapalooza which features popular alternative rock, heavy metal, EDM, hop hop and punk rock artists. Millennium Park, which is a section of Grant Park, opened in the summer of 2004 and features Frank Gehry's Jay Pritzker Pavilion, Jaume Plensa's Crown Fountain, and Anish Kapoor's Cloud Gate sculpture along Lake Michigan.

The Chicago River and its accompanying Chicago Riverwalk, which delineates the area, also provides entertainment and recreational opportunities, including the annual dyeing of the river green in honor of St. Patrick's Day. Trips down the Chicago River, including architectural tours, by commercial boat operators are great favorites with both locals and tourists alike. 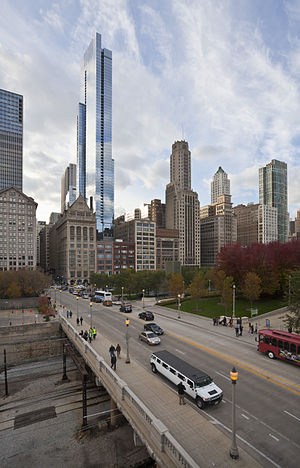 The Loop is the seat of Chicago's government. It is also the government seat of Cook County, Illinois and houses an office for the governor of the State of Illinois. The century old City Hall/County Building houses the chambers of the Mayor, City Council and County Board.

Across the street, the Richard J. Daley Center accommodates a famous Picasso sculpture and the state law courts. Given its proximity to government offices, the Center's plaza serves as a kind of town square for celebrations, protests and other events.

The nearby James R. Thompson Center is the city headquarters for state government, with an office for the Governor. Many state agencies have offices here, including the Illinois State Board of Education.[5]

A few blocks away is the Everett McKinley Dirksen United States Courthouse housing federal law courts and other federal government offices. This is the seat of the United States Court of Appeals for the Seventh Circuit. The Kluczynski Federal Building is across the street. The Federal Reserve Bank of Chicago is located on LaSalle Street in the heart of the financial district. The United States Postal Service operates the Loop Station Post Office at 211 South Clark Street.[6]

According to the 2010 census, 29,283 people live in the neighborhoods in or near the Loop. The median sale price for residential real estate was $710,000 in 2005 according to Forbes.[citation needed] In addition to the government, financial, theatre and shopping districts, there are neighborhoods that are also part of the Loop community area.

The New Eastside is a mixed-use district bordered by Michigan Avenue to the west, the Chicago River to the north, Randolph Street to the south, and Lake Shore Drive to the east. It encompasses the entire Illinois Center and Lakeshore East[8] is the latest lead-developer of the 1969 Planned Development #70, as well as separate developments like Aon Center, Prudential Plaza, Park Millennium Condominium Building, Hyatt Regency Chicago, and the Fairmont Hotel. The area has a triple-level street system and is bisected by Columbus Drive. Most of this district has been developed on land that was originally water and once used by the Illinois Central Railroad rail yards. The early buildings in this district such as the Aon Center and One Prudential Plaza used airspace rights in order to build above the railyards. The New Eastside Association of Residents (NEAR) has been the recognized community representative (Illinois non-profit corporation) since 1991 and is a 501(c)(3) IRS tax-exempt organization.

The triple-level street system allows for trucks to mainly travel and make deliveries on the lower levels, keeping traffic to a minimum on the upper levels. Through north-south traffic uses Middle Columbus and the bridge over the Chicago River. East-west through traffic uses either Middle Randolph or Upper and Middle Wacker between Michigan Avenue and Lake Shore Drive.

Printer's Row, also known as Printing House Row, is a neighborhood located in the southern portion of the Loop community area of Chicago. It is centered on Dearborn Street from Congress Parkway on the north to Polk Street on the south, and includes buildings along Plymouth Court on the east and Federal Street to the west. Most of the buildings in this area were built between 1886 and 1915 for house printing, publishing, and related businesses. Today, the buildings have mainly been converted into residential lofts. Part of Printer's Row is an official landmark district, called the Printing House Row District.[9] The annual Printers Row Lit Fest is held in early June along Dearborn Street.[10]

Dearborn Station at the south end of Printers Row, is the oldest train station still standing in Chicago; it has been converted to retail and office space. Most of the area south of Congress Parkway between Lake Michigan and the Chicago River, excepting Chinatown, is referred to as the South Loop. Perceptions of the southern boundary of the neighborhood have changed as development spread south, and the name is now used as far south as 26th Street.

The neighborhood includes former railyards that have been redeveloped as new-town-in-town such as Dearborn Park and Central Station. Former warehouses and factory lofts have been converted to residential buildings, while new townhouses and highrises have been developed on vacant or underused land. A major landowner in the South Loop is Columbia College Chicago, a private school that owns 17 buildings.

The South Loop was historically home to vice districts, including the brothels, bars, burlesque theaters, and arcades. Inexpensive residential hotels on Van Buren and State Street made it one of the city's Skid Rows until the 1970s. One of the largest homeless shelters in the city, the Pacific Garden Mission, was located at State and Balbo from 1923 to 2007, when it moved to 1458 S. Canal St.[11]

The Loop also contains the Chicago Landmark Historic Michigan Boulevard District, which is the section of Michigan Avenue opposite Grant Park and Millennium Park. 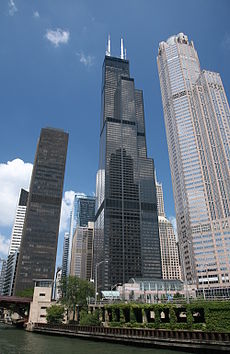 The Loop, along with the rest of downtown Chicago, is the second largest commercial business district in the United States, after New York City's Midtown Manhattan. Its financial district near LaSalle Street is home to the CME Group's Chicago Board of Trade and Chicago Mercantile Exchange.

Chicago Public Schools serves residents of the Loop. Its main administrative offices are in the 125 South Clark Street.[53][54]

Muchin College Prep, a Noble Network of Charter Schools, is also located here, in the heart of Chicago on State Street.