Southern literature (sometimes called the literature of the American South) is defined as American literature about the Southern United States or by writers from this region. Characteristics of Southern literature include a focus on a common Southern history, the significance of family, a sense of community and one’s role within it, a sense of justice, the region's dominant religion (Christianity — see Protestantism) and the burdens/rewards religion often brings, issues of racial tension, land and the promise it brings, a sense of social class and place, and the use of the Southern dialect.[1] 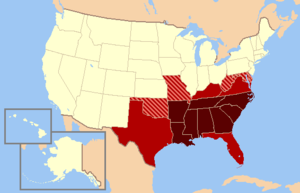 Modern definition The states in dark red are almost always included in modern day definitions of the South, while those in medium red are usually included. The striped states are sometimes/occasionally considered Southern[2][3]

In addition to the geographical component of Southern literature, certain themes have appeared because of the similar histories of the Southern states in regard to slavery, the American Civil War, and Reconstruction. The conservative culture in the South has also produced a strong focus within Southern literature on the significance of family, religion, community in one's personal and social life, the use of the Southern dialect,[1] and a strong sense of "place."[5] The South's troubled history with racial issues also continually appears in its literature.[6]

Despite these common themes, there is debate as to what makes writers and their literature "Southern." For example, Mark Twain, a Missourian, defined the characteristics that many people associate with Southern writing in his novel The Adventures of Huckleberry Finn. In addition, many famous Southern writers headed to the Northern U.S. as soon as they were old enough to make it on their own. So while geography is a factor, the geographical birth of the author is not the defining factor in Southern writing.

During the 17th and 18th centuries, English colonists in the Southern part of the American colonies produced a number of notable works. Two of the most famous were early memoirs of Virginia: Captain John Smith's account of the founding of Jamestown in the 1610s and 1620s, and William Byrd II's secret plantation diary, kept in the early 18th century. Both sets of recollections are critical documents in early Southern history.

After American independence, in the early 19th century, the expansion of cotton planting and slavery began to distinguish Southern society and culture more clearly from the rest of the young republic. During this antebellum period, South Carolina, and particularly the city of Charleston, rivaled and perhaps surpassed Virginia as a literary community. Writing in Charleston, the lawyer and essayist Hugh Swinton Legare, the poets Paul Hamilton Hayne and Henry Timrod, and the novelist William Gilmore Simms composed some of the most important works in antebellum Southern literature.

Simms was a particularly significant figure, perhaps the most prominent Southern author before the American Civil War. His novels of frontier life and the American revolution celebrated the history of South Carolina. Like James Fenimore Cooper, Simms was strongly influenced by Walter Scott, and his works bore the imprint of Scott's heroic romanticism. In The Yemassee, The Kinsmen, and the anti-Uncle Tom's Cabin novel The Sword and the Distaff, Simms presented idealized portraits of slavery and Southern life. While popular and well regarded in South Carolina—and highly praised by such critics as Edgar Allan Poe—Simms never gained a large national audience.

Some critics regard Poe himself as a Southern author—he was raised in Richmond, attended the University of Virginia, and edited the Southern Literary Messenger from 1835 to 1837. Yet in his poetry and fiction Poe rarely took up distinctively Southern themes or subjects; his status as a "Southern" writer remains ambiguous.

In the Chesapeake region, meanwhile, antebellum authors of enduring interest include John Pendleton Kennedy, whose novel Swallow Barn offered a colorful sketch of Virginia plantation life; and Nathaniel Beverley Tucker, whose 1836 work The Partisan Leader foretold the secession of the Southern states, and imagined a guerrilla war in Virginia between federal and secessionist armies.

Not all noteworthy Southern authors during this period were white. Frederick Douglass's Narrative is perhaps the most famous first-person account of black slavery in the antebellum South. Harriet Jacobs, meanwhile, recounted her experiences in bondage in North Carolina in Incidents in the Life of a Slave Girl. And another Southern-born ex-slave, William Wells Brown, wrote Clotel; or, The President's Daughter—widely believed to be the first novel ever published by an African-American. The book depicts the life of its title character, a daughter of Thomas Jefferson and his black mistress, and her struggles under slavery.

The "Lost Cause" years

In the second half of the 19th century, the South lost the Civil War and suffered through what many white southerners considered a harsh occupation (called Reconstruction). In place of the anti-Tom literature came poetry and novels about the "Lost Cause of the Confederacy." This nostalgic literature began to appear almost immediately after the war ended; The Conquered Banner was published on June 24, 1865. These writers idealized the defeated South and its lost culture. Prominent writers with this point of view included poets Henry Timrod, Daniel B. Lucas, and Abram Joseph Ryan and fiction writer Thomas Nelson Page. Others, like African-American writer Charles W. Chesnutt, dismissed this nostalgia by pointing out the racism and exploitation of blacks that happened during this time period in the South.

In 1884, Mark Twain published what is arguably the most influential southern novel of the 19th century, The Adventures of Huckleberry Finn. Ernest Hemingway said of the novel, "All modern American literature comes from one book by Mark Twain called Huckleberry Finn." This statement applies even more to southern literature because of the novel's frank dealings with issues such as race and violence.

Kate Chopin was another central figure in post-Civil War Southern literature. Focusing her writing largely on the Acadian/Cajun communities of Louisiana, Chopin established her literary reputation with the short story collections Bayou Folk (1894) and A Night in Acadie (1897). These stories offered not only a sociological portrait of a specific Southern culture but also furthered the legacy of the American short story as a uniquely vital and complex narrative genre. But it was with the publication of her second and final novel The Awakening (1899) that she gained notoriety of a different sort. The novel not only shocked audiences with its frank and unsentimental portrayal of female sexuality and psychology. It paved the way for the Southern novel as both a serious genre (based in the realism that had dominated the western novel since Balzac) and one that tackled the complex and untidy emotional lives of its characters. Today she is widely regarded as not only one of the most important female writers in American literature, but one of the most important chroniclers of the post-Civil War South and one of the first writers to treat the female experience with complexity and without condescension.

During the first half of the 20th century, the lawyer, politician, minister, orator, actor, and author Thomas Dixon, Jr. wrote a number of novels, plays, sermons, and non-fiction pieces which were quite popular with the general public all over the USA. Today Dixon is perhaps best known for writing a trilogy of novels about Reconstruction, one of which was entitled The Clansman (1905), a book which would eventually become the inspiration for D. W. Griffith's infamous 1915 film The Birth of a Nation. Overall Dixon wrote 22 novels, numerous plays and film scripts,[7] Christian sermons, and some non-fiction works during his lifetime.

In the 1920s and 1930s, a renaissance in Southern literature began with the appearance of writers such as William Faulkner, Katherine Anne Porter, Caroline Gordon, Allen Tate, Thomas Wolfe, Robert Penn Warren, and Tennessee Williams, among others. Because of the distance the Southern Renaissance authors had from the American Civil War and slavery, they were more objective in their writings about the South. During the 1920s, Southern poetry thrived under the Vanderbilt "Fugitives". In nonfiction, H.L. Mencken's popularity increased nationwide as he shocked and astounded readers with his satiric writing highlighting the inability of the South to produce anything of cultural value. In reaction to Mencken's essay, "The Sahara of the Bozart," the Southern Agrarians (also based mostly around Vanderbilt) called for a return to the South's agrarian past and bemoaned the rise of Southern industrialism and urbanization. They noted that creativity and industrialism were not compatible and desired the return to a lifestyle that would afford the Southerner leisure (a quality the Agrarians most felt conducive to creativity). Writers like Faulkner, who won the Nobel Prize in Literature in 1949, also brought new techniques such as stream of consciousness and complex narrative techniques to their writings. For instance, his novel As I Lay Dying is told by changing narrators ranging from the deceased Addie to her young son.

The late 1930s also saw the publication of one of the best-known Southern novels, Gone with the Wind by Margaret Mitchell. The novel, published in 1936, quickly became a bestseller. It won the 1937 Pulitzer Prize, and in 1939 an equally famous movie of the novel premiered. Southern literature became popular across genres; children's books like Ezekiel, published in 1937 by writer/illustrators like Elvira Garner, drew audiences outside the South.

Southern literature following the Second World War grew thematically as it embraced the social and cultural changes in the South resulting from the American Civil Rights Movement. In addition, more female and African-American writers began to be accepted as part of Southern literature, including African Americans such as Zora Neale Hurston and Sterling Allen Brown, along with women such as Eudora Welty, Flannery O'Connor, Ellen Glasgow, Carson McCullers, Katherine Anne Porter, and Shirley Ann Grau, among many others. Other well-known Southern writers of this period include Reynolds Price, James Dickey, William Price Fox, Davis Grubb, Walker Percy, and William Styron. One of the most highly praised Southern novels of the 20th century, To Kill a Mockingbird by Harper Lee, won the Pulitzer Prize when it was published in 1960. New Orleans native and Harper Lee's friend, Truman Capote also found great success in the middle 20th century with Breakfast at Tiffany's and later In Cold Blood. Another famous novel of the 1960s is A Confederacy of Dunces, written by New Orleans native John Kennedy Toole in the 1960s but not published until 1980. It won the Pulitzer Prize in 1981 and has since become a cult classic.

Southern poetry bloomed in the decades following the Second World War in large part thanks to the writing and efforts of Robert Penn Warren and James Dickey. Where earlier work primarily championed a white, agrarian past, the efforts of such poets as Dave Smith, Charles Wright, Ellen Bryant Voigt, Yusef Komunyakaa, Jim Seay, Frank Stanford, Kate Daniels, James Applewhite, Betty Adcock and Rodney Jones have opened up the subject matter and form of Southern poetry.[8]

Today, in the early twenty-first century, the American South is undergoing a number of cultural and social changes, including rapid industrialization/deindustrialization and an influx of immigrants. As a result, the exact definition of what constitutes southern literature is changing. Some critics specify that the previous definitions of southern literature still hold, with some of them suggesting, only somewhat in jest, that all southern literature must still contain a dead mule within its pages.[9] Still, the successful crime novels of James Lee Burke are not ashamed of making a point of their own southernness; their nationwide popularity has been attributed to their southern appeal[10]

Others, though, say that the very fabric of the South has changed so much that the old assumptions about southern literature no longer hold. For example, Truman Capote, born and raised in the Deep South, is best known for his novel In Cold Blood, a piece with none of the characteristics associated with "southern writing." Other southern writers, such as popular author John Grisham, rarely write about traditional southern literary issues. John Berendt, who wrote the popular Midnight in the Garden of Good and Evil, is not a Southerner.