From Infogalactic: the planetary knowledge core
Jump to: navigation, search
For other uses, see Spire (disambiguation). 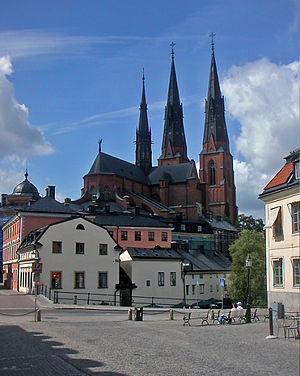 The spires of Uppsala cathedral in Sweden 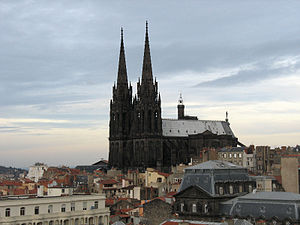 Gothic spires. The 108-metre tall spires of Clermont-Ferrand Cathedral tower above the city 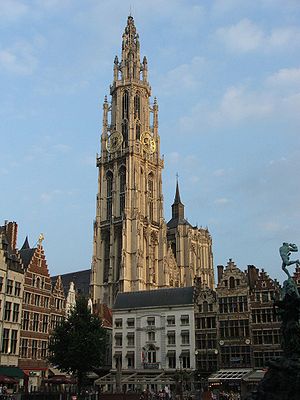 The Gothic spire of Antwerp Cathedral

The Gothic spire of Ulm Cathedral 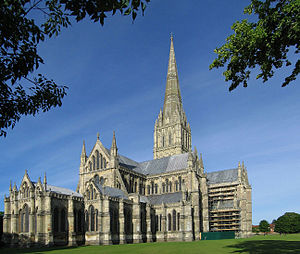 A spire is a tapering conical or pyramidal structure on the top of a building, particularly a church tower. Etymologically, the word is derived from the Old English word spir, meaning a sprout, shoot, or stalk of grass.[1]

Currently, the largest spire to be part of the architecture of another building is the one mounted on the recently completed Q1 residential tower on the Gold Coast in Australia.[citation needed]

Symbolically, spires have two functions. The first is to proclaim a martial power of religion. A spire, with its reminiscence of the spear point, gives the impression of strength. The second is to reach up toward the skies.[2] The celestial and hopeful gesture of the spire is one reason for its association with religious buildings.[citation needed] A spire on a church or cathedral is not just a symbol of piety, but is often seen as a symbol of the wealth and prestige of the order, or patron who commissioned the building.

As an architectural ornament, spires are most consistently found on Christian churches, where they replace[citation needed] the steeple. Although any denomination may choose to use a spire instead of a steeple, the lack of a cross on the structure is more common in Roman Catholic and other pre-Reformation churches. The battlements of cathedrals featured multiple spires in the Gothic style (in imitation of the secular military fortress).

Spires also occur commonly and notably as solo structures, in the way that obelisks are used. The Modernist movements of the 20th century began to build office towers in the form of free-standing spires. Some famous buildings, such as the Space Needle in Seattle, Washington, use the spire as a testimony of civic power and hope; this example also references Seattle's participation in aerospace. The 1,776-foot (541-m) One World Trade Center building at Ground Zero in New York City is built with a spire, the height of which (being a permanent structure and not just an antenna) puts the building over the mark for the tallest building in the United States. Without the spire, the Willis Tower would still hold the title for tallest building in the US.

A spire declared the presence of the gothic church at a distance and advertised its connection to heaven. The tall, slender pyramidal twelfth-century spire on the south tower Chartres Catedral is one of the earliest spires. Openwork spires were an astounding architectural innovation, beginning with the early fourteenth-century spire at Freiburg Minster, in which the pierced stonework was held together by iron cramps. The openwork spire, according to Robert Bork,[3] represents a "radical but logical extension of the Gothic tendency towards skeletal structure." The organic skeleton of Antoni Gaudi's phenomenal spires at the Sagrada Família in Barcelona represent an outgrowth of this Gothic tendency. Designed and begun by Gaudi in 1884, they were not completed until the 20th century.

In England, "spire" immediately brings to mind Salisbury Cathedral. Its 403-foot (123-m) spire, built between 1320 and 1380, is one of the tallest of the period anywhere in the world. A similar but slightly smaller spire was built at Leighton Buzzard in Bedfordshire, England, which indicates the popularity of the spire spreading across the country during this period. We will never know the true popularity of the medieval spire, as many more collapsed within a few years of building than ever survived to be recorded. In the United Kingdom spires generally tend to be reserved for ecclesiastical building, with the exception to this rule being the spire at Burghley House, built for Elizabeth I's Lord Chancellor in 1585.

In the early Renaissance the spire was not restricted to the United Kingdom: the fashion spread across Europe. After the destruction of the 135 m tall spire of the St. Lambert's Cathedral, Liège in the 19th century, the 123 m spire of Antwerp is the tallest ecclesiastical structure in the low countries . Between 1221 and 1457 richly decorated open spires were built for the Cathedral of Burgos in Spain while at Ulm Cathedral in Germany the 529-foot (161-m) spire built in the imported French Gothic style between 1377 and 1417 ultimately failed.[4]

Interestingly, the Italians never really embraced the spire as an architectural feature, preferring the classical styles. The gothic style was a feature of Germanic northern Europe and was never to the Italian taste, and the few gothic buildings in Italy always seem incongruous.

The blend of the classical styles with a spire occurred much later. In 1822, in London, John Nash built All Souls' Church, Langham Place, a circular classical temple, with Ionic columns surmounted by a spire supported by Corinthian columns. Whether this is a happy marriage of styles or a rough admixture is a question of individual taste.

During the 19th century the Gothic revival knew no bounds. With advances in technology, steel production, and building techniques the spire enjoyed an unprecedented surge through architecture, Cologne Cathedral's famous spires, designed centuries earlier, were finally completed in this era.

Spires have never really fallen out of fashion. In the twentieth century reinforced concrete offered new possibilities for openwork spires. 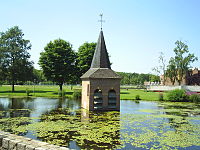 Clad spires can take a variety of shapes. These include:

Pyramidal spires, which may be of low profile, rising to a height not much greater than its width, or, more rarely, of high profile.
Rhenish helm: This is a four-sided tower topped with a pyramidal roof. each of the four sides of the roof is rhomboid in form, with the long diagonal running from the apex of roof to one of the corners of the supporting tower; each side of the tower is thus topped with a gable from whose peak a ridge runs to the apex of the roof.
Broached spires: These are octagonal spires sitting on a square tower, with a sections of spire rising from each corner of the tower, and bridging the spaces between the corners and four of the sides.
Bell-shaped spires: These spires, sometimes square in plan, occur mostly in Northern, Alpine and Eastern Europe, where they occur alternately with onion-shaped domes.