From Infogalactic: the planetary knowledge core
Jump to: navigation, search
For other uses, see Squadron. 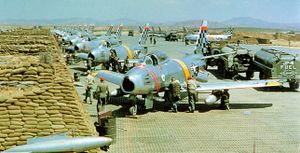 A squadron in air force, army aviation, or naval aviation is mainly a unit comprising a number of military aircraft and their aircrews, usually of the same type, typically with 12 to 24 aircraft, sometimes divided into three or four flights, depending on aircraft type and air force. Land based squadrons equipped with heavier type aircraft such as long-range bombers, or cargo aircraft, or air refueling tankers have around 12 aircraft as a typical authorization, while most fighter equipped units have an authorized number of 18 to 24.

Also in contrast to USAF flying units, sea-based and land-based U.S. Naval Aviation squadrons (USN + USMC) rarely have more than 12 aircraft authorized/assigned at any one time.

Although part of U.S. naval aviation, United States Coast Guard aviation units are centered on an air station versus a squadron or group/wing organizational structure. The one exception to this is the Coast Guard's Helicopter Interdiction Squadron (HITRON), which is engaged primarily in counter-narcotics (CN) interdiction operations.

In U.S. Army Aviation, flying units may be organized in battalions or squadrons (air cavalry only) reporting to an aviation brigade.

An escadron is the equivalent unit in France's Armée de l'Air. It is normally subdivided into escadrilles of eight aircraft.

In the Air Training Corps of the United Kingdom and many Commonwealth nations, a Squadron is a group of cadets who parade regularly.

In the U.S. Civil Air Patrol, a squadron is the basic administrative unit.

In the Swedish Air Force a squadron (helikopterskvadron) is a detachment from the "Helicopter Wing" (Helikopterflottiljen).[1]