The Minister of Defence is responsible for execution of military policy. He is advised by the Chief of Staff of the Armies (CEMA) in regard to the use of forces and the control of military operations. The Chief of Staff of the French Air Force (CEMAA) determines the air force doctrines and advises the CEMA how to deploy French air assets. He is responsible for the preparation and logistic support of the air force.

The French took active interest in developing the air force from 1909 and had the first World War I fighter pilots. During the interwar years, however, particularly in the 1930s, the French Air force lost ground, both in numbers and quality to the Luftwaffe, which helped defeat the French during the Battle of France.

In the post–World War II era, the French made a successful effort to develop a domestic aircraft industry. Dassault Aviation led the way mainly with delta-wing designs, which formed the basis for the Mirage series of jet fighters. The Mirage demonstrated its abilities in the Six-Day War, Yom Kippur War, the Falklands War and the Gulf War, becoming one of the most popular jet fighters of its day, with a high quantity of sales. The French Air Force participated in several protracted colonial wars in Africa and French Indochina after the Second World War, and continues to employ its air power in Africa.

Beginning in January 1964, the French political leadership reprioritized its military emphasis on nuclear deterrence, implementing a complete reorganisation of the Air Force, with the creation of four air régions and seven major specialised commands, among which was the Strategic Air Forces Command (Commandement des forces aérienne stratégiques) (CoFAS).[8] The Military Air Transport Command had previously been formed in February 1962 from the Groupement d'Unités Aériennes Spécialisées. The Dassault Mirage IV, the principal French strategic bomber, was designed to strike Soviet positions as part of the French nuclear triad. Also created in 1964 was the Escadron des Fusiliers Commandos de l'Air (EFCA), seemingly grouping all FCA units.

In 1985, the Air Force had four major flying commands, the Strategic Air Forces Command, the Tactical Air Forces Command, the Military Air Transport Command, and the Commandement Air des Forces de Défense Aérienne (Air Command of Air Defence Forces).[9] CFAS had two squadrons of S-3 IRBMs at the Plateau d'Albion, six squadrons of Mirage IVAs (at Mont de Marsan, Cazaux, Orange, Istres, St Dizier, and EB 3/94 at Luxeuil), and three squadrons of KC-135Fs, as well as a training/reconnaissance unit, CIFAS 328, at Bordeaux. The tactical air command included wings EC 3, EC 4, EC 7, EC 11, EC 13, and ER 33, with a total of 19 squadrons of Mirage III, Jaguars, two squadrons flying the Mirage 5F (EC 2/13 and EC 3/13, both at Colmar), and a squadron flying the Mirage F.1CR. CoTAM counted 28 squadrons, of which ten were fixed-wing transport squadrons, and the remainder helicopter and liaison squadrons, at least five of which were overseas. CAFDA numbered 14 squadrons mostly flying the Mirage F.1C. Two other commands had flying units, the Air Force Schools Command (CEAA), and the Air Force Transmissions Command, with four squadrons and three trials units.

In 1994 the Commandement des Fusiliers Commandos de l'Air was established.

Currently, the French Air Force is expanding and replacing aircraft inventory. The French are awaiting the A400M military transport aircraft, which is still in developmental stages, and the integration of the new Dassault Rafale multi-role jet fighter, whose first squadron of 20 aircraft became operational in 2006 at Saint-Dizier.

After an absence lasting several decades, the French President Nicolas Sarkozy confirmed that France will rejoin the NATO integrated command.[10] France has also been a lead nation, alongside the United States, Great Britain and Italy in implementing the UN sponsored no-fly zone in Libya (NATO 'Odyessy Dawn'), deploying 20 fighter aircraft to Benghazi in defense of rebel held positions and the civilian population.[11]

From 2008-2010 the Air Force underwent an organisational streamlining process. This project was called Air 2010, which was the year of the deadline for all transitions. The main targets of this project were to simplify the command structure, to regroup all military and civil air force functions and to rationalise and optimise all air force units. Five major commands, were formed, instead of the former 13, and to disband several commands and units.[12]

The last remaining squadron of Dassault Mirage F1s were retired in July 2014 and replaced by the Rafale. 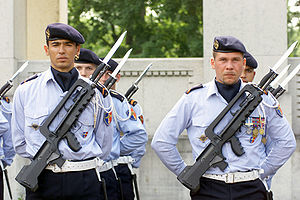 Riflemen of the French Air Force 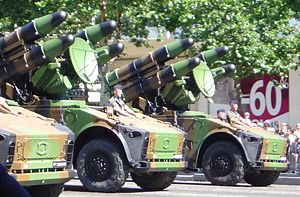 The Air Force's responsibilities are separated in two main types of commands: operational commands (direct responsible for force deployment) and organic commands (in charge of conditioning and logistic support).

This command controls all the air force's nuclear assets, and is responsible for the operational condition and the eventual deployment of these weapons.[13] The CFAS commanding general is currently Général de corps aérien Patrick Charaix. The CFAS is one of the two pillars of the French nuclear deterrent. CFAS has two squadrons of dual capable aircraft, one of Mirage 2000N fighter/bombers capable of carrying the nuclear Air-Sol Moyenne Portée stand-off missile (EC 2/4 at Istres Le Tube), one of Rafales (EC 1/91 Gascogne at Saint-Dizier – Robinson Air Base) and a squadron of C-135FR in-flight refueling tankers.

This overall command is responsible for all air operations in peacetime serving the public, for the defence of the French airspace and for all offensive and defensive air operations at war. CDAOA, based in Paris and Lyon, plans and executes all air operations. Former Commandement air des systèmes de surveillance, d'informations et de communication (CASSIC) personnel are embedded here to develop exercises and operations abroad.

A new command which was inaugurated in 2006. Its headquarters is at Metz. It is responsible for ensuring and to maintain the operational condition of all branches of the air force now and for the future. Today the CFA consists of 16 fighter, 25 air defence squadrons, one electronic warfare squadron, and simulator and instruction centres.[citation needed] At its airbases in Europe and abroad the CFA has 16,000 personnel, 246 fighter aircraft, 111 transport aircraft and 83 helicopters. The command is divided into:

Circa 2013 the CFA and the former commandement du soutien de la force aérienne (CSFA) merged.[15] CSFA, based in Bordeaux, directed the technical and logistical assets. Since 2006 it had taken over many ex-CASSIC projects.

Wings (escadres), which were dissolved from 1993 as part of the Armées 2000 reorganisation, were reestablished in 2014.[16] The problems caused by having the aircraft maintenance units not responsible to the flying squadrons they supported eventually forced the change.

Four wings were reformed in the first phase:[16]

In the second phase, the Air Force announced in August 2015 the creation of seven additional wings :[16]

The air base command levels are the combat assets of the ALA. An airbase commander has authority over all units stationed on his base. Depending on the units tasks this means that he is responsible for approximately 600 to 2500 personnel.

Flying activity in France is carried out by a network of bases, platforms and French air defence radar systems. It is supported by bases, which are supervised and maintained by staff, centres of operations, warehouses, workshops, and schools.

Both in France and abroad, bases have almost similar infrastructure to provide standardised support. This operational mode allows fast and easy creation of air bases outside France.

Overseas, fighters, transport aircraft and helicopters allow quick response to any request for assistance that falls within international agreements. On average, a base platform, made up of about 1500 personnel (nearly 3500 people including family), provides a yearly economic boost to its area of about 60 million euros. Consequently, determining the sites for air bases constitutes a major part of regional planning. [17] 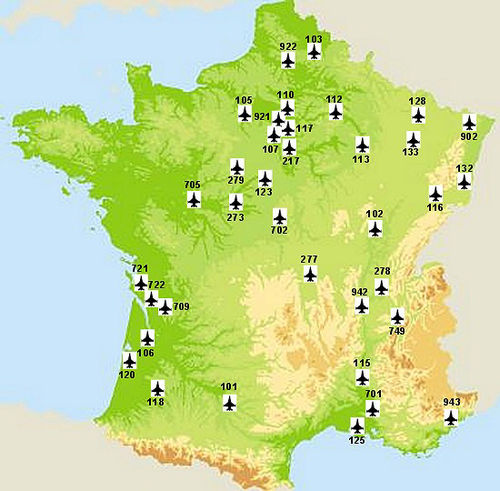 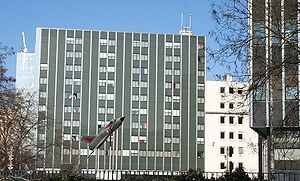