St Bartholomew's Hospital, commonly known as Barts, is a teaching hospital located in the City of London. It was founded in 1123 and is currently run by Barts Health NHS Trust.

Barts was founded in 1123 by Rahere (died 1144, and entombed in the nearby Priory Church of St Bartholomew the Great), a favourite courtier of King Henry I. The Dissolution of the Monasteries did not affect the running of Barts as a hospital, but left it in a precarious position by removing its income. It was refounded by King Henry VIII in December 1546, on the signing of an agreement granting the hospital to the Corporation of London.[2]

The hospital became legally styled as the "House of the Poore in Farringdon in the suburbs of the City of London of Henry VIII's Foundation", although the title was never used by the general public. The first Superintendent of the hospital was Thomas Vicary, sergeant-surgeon to King Henry, and an early writer on anatomy.[2] It was here that William Harvey conducted his research on the circulatory system in the 17th century, Percivall Pott and John Abernethy developed important principles of modern surgery in the 18th century, and Mrs Bedford Fenwick worked to advance the nursing profession in the late 19th century.[3]

From 1839 to 1872, the mortality reports show that surgical trauma and postoperative infection were the greatest causes of death. Tuberculosis, however, remained the most fatal nontraumatic cause of death.[4] Nurses were expected to work 12 hours a day, and sometimes 14, with meal breaks in 1890. They had 2 weeks annual holiday.[5] Upon the creation of the National Health Service in 1948, it officially became known as St Bartholomew's Hospital.[6]

Barts is the oldest hospital in Britain still providing medical services which occupies the site it was originally built on, and has an important current role as well as a long history and architecturally important buildings. The so-named Henry VIII entrance to the hospital continues to be the main public entrance; and the statue of King Henry VIII above the gate is the only remaining statue of him in London.[7]

Its main square was designed by James Gibbs in the 1730s. Of the four original blocks, three survived; they include the block containing the Great Hall and two flanking blocks that contained wards. The first wing to be built was the North Wing, in 1732, which includes the Great Hall and the murals by William Hogarth. The South Wing followed in 1740, the West in 1752 and finally the East Wing in 1769. In 1859, a fountain was placed at the square's centre with a small garden.[2]

St Bartholomew's Hospital has existed on the same site since its founding in the 12th century, surviving both the Great Fire of London and the Blitz. Its museum, which is open Tuesdays to Fridays every week, shows how medical care has developed over this time and explains the history of the hospital. Part-way around the exhibition is a door which opens on to the hospital's official entrance hall. On the walls of the staircase are two murals painted by William Hogarth, The Pool of Bethesda (1736) and The Good Samaritan (1737). They can only be seen at close quarters on Friday afternoons. Hogarth was so outraged by the news that the hospital was commissioning art from Italian painters that he insisted on doing these murals free of charge, as a demonstration that English painting was equal to the task. The Pool of Bethesda is of particular medical interest, as it depicts a scene in which Christ cures the sick: display material on the first floor speculates in modern medical terms about the ailments from which Christ's patients in the painting are suffering.[8]

File:Bartshogarth-800.jpg
Hogarth's mural of Christ at the Pool of Bethesda.

The room to which the staircase leads is the hospital's Great Hall, a double-height room in Baroque-style. Although there are a few paintings inside the Great Hall, nearly all are on movable stands: the walls themselves are mostly given over to the display of the very many large, painted plaques which list, in detail, the sums of money given to the hospital by its benefactors.[9]

After the Dissolution of the Monasteries, the hospital precincts of the ancient priory were redesignated as an Anglican ecclesiastical parish, with St Bartholomew-the-Less becoming the parish church – a unique situation amongst English hospital foundations. St Barts-the-Less is the only survivor of five chapels originally within the hospital's estate, the others failing to survive the Reformation. The church has a 15th-century tower and vestry, and its connections with the hospital can be seen not only in its early-20th century stained glass window of a nurse, a gift from the Worshipful Company of Glaziers, but also in commemorative plaques adorning its interior.[10]

Throughout the whole of the 19th century, the Hardwick family were major benefactors of the hospital. Thomas Hardwick Jr. (1752–1825), Philip Hardwick (1792–1870), and Philip Charles Hardwick (1822–1892) were all architects/surveyors to Barts Hospital. Philip Hardwick, a Royal Academician, was also engaged in the rebuilding of the Church of St Bartholomew-the-Less in 1823 and donated the fountain in the hospital's courtyard.[11] 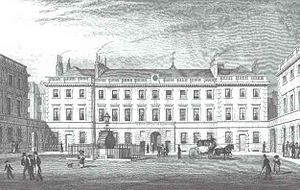 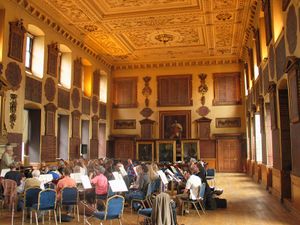 The Great Hall at Barts 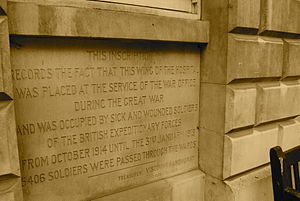 A memorial tablet on Barts north wall stating that 5,406 soldiers passed through its wards during the First World War.

In 1993 the controversial Tomlinson Review of London hospitals was published and concluded that there were too many hospitals in central London. It recommended that the service should be delivered closer to where people lived. Barts was identified as a hospital with a catchment area that had a low population[12] and the hospital was threatened with closure.[13] A determined campaign was mounted to save the hospital by the Save Barts Campaign, supported by staff, residents, local MPs and the City of London Corporation.[14]

Some facilities were saved, but the accident and emergency department closed in 1995,[15] with facilities relocated to the Royal London Hospital (a hospital in the same trust group, but a couple of miles away in Whitechapel). A minor injuries unit was established at Barts for small cases (which often represent a significant part of the workload of A&E services) but urgent and major work goes to other hospitals.[15]

A plan was formulated for Barts to develop as a centre of excellence in cardiac care and cancer. The plan came under threat when it was announced that the works would be procured under a private finance initiative contract; the Save Barts campaign continued to protest.[16] The opposition subsided and a new Barts Heart Centre[17] and new cancer care facilities were created.[18] The Queen Mary Wing was demolished and the façade of the George V building was retained within a new hospital building. A new main entrance was established on King Edward Street. The three James Gibbs blocks were refurbished and car parking was removed from the area.[19] The works, which were designed by HOK[20] and undertaken by Skanska at a cost of circa £500 million, were completed in early 2016.[21]

Barts continues to be associated with excellence at its medical school's significant research and teaching facilities on the Charterhouse Square site.[22] Barts, along with the Royal London Hospital and London Chest Hospital, was part of Barts and The London NHS Trust. There are 388 beds in Barts and 675 beds in the Royal London. These hospitals amalgamated with Whipps Cross and Newham hospitals on 1 March 2012 to form the Barts Health NHS Trust.[23]

In 2018, Nuffield Health, a not-for-profit healthcare organisation, was granted planning permission to redevelop the former pathology and residential staff quarters building into a new private hospital. It will be the only private hospital in the City of London, and will have 48 beds and 4 operating theatres. It is expected to open in 2021, at a cost of £60 million. It will be physically and operationally separate from the rest of the hospital, and will be known as Nuffield Health at St Bartholomew's Hospital.[24] 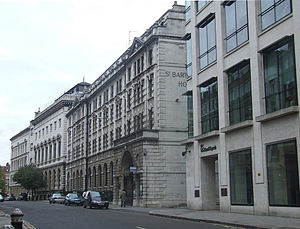 In 1843, St Bartholomew's Hospital Medical College was established to train medics although considered to have been started by John Abernethy when the hospital built a theatre for his lectures at the beginning of the century.[25] In 1995 the college, along with that attached to the Royal London, merged into Queen Mary University of London, but maintains a distinctive identity to this day. It is now known as Barts and The London School of Medicine and Dentistry. It occupies some space at the Barts site in Farringdon, with a presence a short walk away at Charterhouse Square. The main preclinical teaching domain of the medical school is at Whitechapel in the award-winning Blizard Building.[26]

The present School of Nursing and Midwifery was formed in 1994 from merging the Schools from St Bartholomew's Hospital and the Royal London Hospital to become the St Bartholomew School of Nursing & Midwifery. In 1995 the new School was incorporated into the City University.[27][28] Both Schools have a strong and respected history dating back over 120 years and have produced many nurse leaders and educators. The School has since been incorporated into the School of Health Sciences, City University London.[29]

The Barts Museum tells the historical narrative of the hospital and its work in caring for the sick and injured. The museum collections include historic surgical instruments, sculptures, medieval archives, and works of art, including paintings by William Hogarth. The museum is part of the London Museums of Health & Medicine group, and has been described as one of the world's "10 weirdest medical museums."[30][31]

The museum is located under the North Wing archway and is open from Tuesday to Friday from 10 am to 4 pm. Admission is free, but donations are welcome. The collections are searchable on the Barts Health NHS Trust online catalogue, which contains information on over 50,000 entries and covering an 800-year span.[32]

A chemical laboratory at Barts was the location of the initial meeting of Sherlock Holmes and Dr. Watson in Arthur Conan Doyle's 1887 novel A Study in Scarlet.[33] Barts was Watson's alma mater. This fictional connection led to a donation by the Tokyo "Sherlock Holmes Appreciation Society" to the Save Barts Campaign in the 1990s.[34]

In 2012, the final episode of the second series of the BBC drama Sherlock, "The Reichenbach Fall", had Holmes appearing to have deliberately leapt to his death from the roof of St Bartholomew's as a surrogate for the waterfall of the original story "The Final Problem". The hospital was again used as the location for the resolution to Holmes' faked suicide, in the first series three episode "The Empty Hearse".[35]

Template:Barts and The London School of Medicine and Dentistry