Farringdon is a London Underground and connected main line National Rail station in Clerkenwell, in the London Borough of Islington, just outside the City of London. It was opened in 1863 as the terminus of the Metropolitan Railway, which was the world's first underground railway.

The Underground station is now served by the Circle, Hammersmith & City, and Metropolitan lines. The National Rail station is one of the less important main line central London stations, but that is expected to change when it becomes a major interchange station between the two largest transport infrastructure programmes currently under way in London: Thameslink and Crossrail, both scheduled for completion in 2018.

The station was opened on 10 January 1863 as the terminus of the original Metropolitan Railway, the world's first underground metro line. The station, initially named Farringdon Street, was originally a short distance from the present station building. The line ran from the Farringdon area to Paddington, a distance of 4 mi (6 km). The station was relocated on 23 December 1865 when the Metropolitan Railway opened an extension to Moorgate. It was renamed Farringdon & High Holborn on 26 January 1922, and its present name was adopted on 21 April 1936.[7] It was built in conjunction with a freight route to take livestock to a depot to its south to supply Smithfield Market; there are cattle ramps onto the street West Smithfield for this purpose. Smithfield was redesignated as a wholesale 'deadmeat' market only before the initiation of services; the freight station was last used in the 1920s but remains in situ. 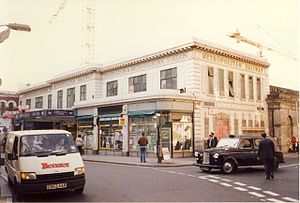 The lines from Farringdon to King's Cross run alongside the now culverted River Fleet, which was above ground here until 1734.[8] The station building is an unusually well-preserved piece of early 20th-century London Underground architecture; it still has its original signage (with the name Farringdon & High Holborn on the façade) and other indications of the Metropolitan Railway's original main-line style operation, with a sign for a Parcel Office also surviving on the exterior wall.

After the bay platforms at Blackfriars closed in March 2009, Southeastern services that previously terminated at Blackfriars were extended to Kentish Town, St. Albans, Luton or Bedford, calling at this station.[9] Thameslink trains to Moorgate ceased at the same time.

There are two major rail development projects in progress that involve Farringdon. Crossrail is a new east-west railway scheduled to open in 2018, and the Thameslink Programme is a major upgrade to the existing north-south Thameslink route, enabling longer and more frequent trains, also scheduled to be completed in 2018.

After the completion of Crossrail, Farringdon will be one of the country's busiest stations with approximately 200tph which equals to a departure from the station every 20 seconds.[10] It will be the only station where passengers can change between Crossrail and Thameslink. A new building, housing a dedicated ticket hall, has been constructed to serve these extra passengers. The new building is to the immediate south of the original station, which itself has been upgraded as part of the programme.

An additional entrance has also been built at the north end of the original station, onto Turnmill Street. 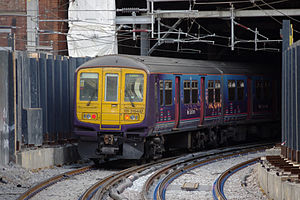 A Class 319 heads south from Farringdon. On the left is the blocked-off branch to Moorgate, closed as part of the Thameslink upgrade.

Farringdon Station has been rebuilt[11] to accommodate longer Thameslink trains and to make other improvements to the station.[12] The existing station building has been refurbished with a new roof canopy covering the north end of all four platforms and a new entrance and concourse facing Turnmill Street. An additional ticket hall has been built on the south side of Cowcross Street providing access to the Thameslink platforms, which have been extended southwards underneath this building, allowing the station to handle 240 m (12-carriage) trains. Platforms have been widened to accommodate increased passenger numbers. This process required the bridge that formed Cowcross Street to be demolished and rebuilt.[13] Cowcross Street will be pedestrianised.[14] Lifts have been provided throughout.

The existing listed ticket hall and concourse have been remodelled, for use by London Underground and Thameslink passengers.[15] Interchange within the station has been improved by removing the interchange bridge and installing new stairs and lifts with access to all four platforms, allowing passengers with impaired mobility to use the station.[16]

It was necessary to build the Thameslink platform extensions to the south, since there is a sharp gradient to the immediate north of the station. This resulted in the two-station branch to Moorgate being permanently closed.[17] The platform extensions cross the former Moorgate line and reach within a few metres of the entrance of the Snow Hill Tunnel.[18] The alternative of realigning both the Thameslink and Circle/Hammersmith & City/Metropolitan lines was impractical as the latter crosses over the former on a bridge almost immediately to the north of the station.[18]

The Farringdon Crossrail station is being built between Farringdon and Barbican Underground stations and it will have interchanges with both of them.[19] Access at the Farringdon end will be via the new Thameslink ticket hall. Work is anticipated to be completed in 2018.[20][21] Crossrail will link Farringdon to London City Airport and London Heathrow Airport, the Olympic Park in Stratford, Canary Wharf, Bond Street and Oxford Street, and Maidenhead in the west and Shenfield in the east. The station will also be a hub for cross-London travel, being the only station to be on both the north-south Thameslink service and the east-west Crossrail service.[22] 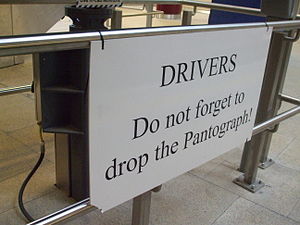 Warning to drivers heading south from Farringdon in August 2012

Farringdon station is notable because Thameslink trains switch between the 25 kV AC overhead supply used to the north of London and the 750 V DC third rail supply used to the south whilst standing at the platform. The trains that formerly ran to Moorgate used 25 kV AC throughout their journeys. This project was installed by the Network SouthEast sector of British Rail in May 1988. 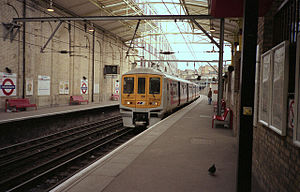 Until the start of the Thameslink Programme southbound trains that were unable to switch to DC were taken out of service at Farringdon and stabled at Moorgate to prevent them from blocking the core section of the Thameslink route. As this option is no longer possible the catenary has been extended to City Thameslink to enable these trains to continue to the southbound platform[23] at City Thameslink using AC and then return northwards using the new crossover in Snow Hill Tunnel.[24] The pantograph on southbound trains is normally lowered at Farringdon. 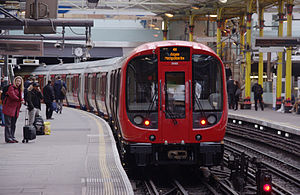 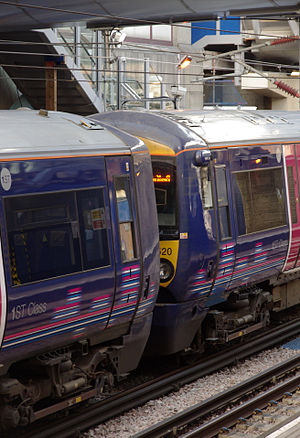 Farringdon is in the core of the Thameslink network, and is served by Thameslink. These Class 377 Electrostar units operate over the Bedford to Brighton route, whilst Class 319 units operate the remaining services.

The London Underground part of the station is served by the Metropolitan, Hammersmith & City and Circle lines, between King's Cross St. Pancras and Barbican.

Farringdon is also served by Thameslink trains from Brighton to Bedford, via Gatwick Airport, or from Luton to Sutton or Wimbledon and from Bedford/Luton/St Albans to Sevenoaks in peak-hours and West Hampstead Thameslink and Kentish Town to Sevenoaks on off-peak hours by Class 319s. The stations on either side are City Thameslink and St Pancras International.

Until 20 March 2009, some Thameslink weekday peak-hour trains ran into Moorgate and terminated there rather than continuing south to Blackfriars and beyond. These services were withdrawn to allow the junction at the south end of the station to be removed so that the platforms could be extended to take 12-coach trains.

Passengers can still travel from Farringdon to Barbican and Moorgate using the London Underground service.

Farringdon is in Transport for London's Travelcard Zone 1.

In stream of consciousness lyrics, the electronica group Underworld refer to the station as the "tubehole on Farringdon Street" (sic) in their 1993 track "Dirty Epic".[30]