Zahn was born in Marshall, Minnesota, the son of Zelda, who worked for the YMCA, and Carleton Edward Zahn, a retired Missouri Synod Lutheran pastor.[2][3][4] His father is of German and Swedish descent, and his mother is of German ancestry.[5] Zahn spent part of his childhood in Mankato, Minnesota, attending Kennedy Elementary School, and later moved to the suburbs of Minneapolis.

After attending Robbinsdale Cooper High School, Gustavus Adolphus College, and the Institute for Advanced Theater Training at American Repertory Theater at Harvard University, his first professional acting role was in Biloxi Blues, a Minnesota production at the Old Log Theater; but his first big break came in 1994, when he was noticed by actor/director Ben Stiller, who cast him in his picture, Reality Bites. 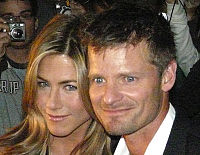 Zahn with Jennifer Aniston at the premiere of the movie Management, in which they both starred, 2008.

Zahn's early roles were split between movies, touring companies of Broadway shows, and TV shows. From 1992 to 1993, he toured as Hugo with the Barry Weissler production of Bye Bye Birdie with Tommy Tune, Ann Reinking, and Marc Kudisch. He played Phoebe Buffay's husband Duncan in a 1995 episode of Friends.

Zahn appeared in several films in the mid-1990s, including Tom Hanks' That Thing You Do! (1996), Nora Ephron's You've Got Mail (1998), and Steven Soderbergh's Out of Sight (1998). These films garnered him enough respect that he was offered the starring role in the critically acclaimed indie film Happy, Texas (1999). Some of Zahn's most popular movies have been his later ones, including National Security (2003), Daddy Day Care (2003) and Sahara (2005).

Zahn received his strongest critical acclaim for his performance in Riding in Cars with Boys, in which he co-starred with Drew Barrymore as her dim-witted, drug addicted husband. Roger Ebert, Richard Roeper and the BBC stated that the performance was deserving of an Oscar nomination. He also gave dramatic performances in Rescue Dawn and the television mini-series Comanche Moon.

Typically typecast into comic relief sidekick roles, Zahn was asked if he minded, his reply was that it was a "pleasure" and a "privilege," saying: "to be typecast and make money and make people happy and people dig what you do, what a great thing, man."[1]

Zahn also plays the character of Davis McAlary in HBO's Treme. Davis is a New Orleans native and local music lover, as well as one of Treme's biggest partiers, and advocates. Zahn also recorded a song for the show, and is featured on the show's soundtrack. The track, "Shame, Shame, Shame", criticizes George W. Bush and the American government's response to the disastrous aftermath of Hurricane Katrina in the city of New Orleans.

In 2014, he co-starred with Christian Slater in ABC's sitcom Mind Games.[6]

On July 16, 1994, Zahn married Robyn Peterman, an actress and the daughter of entrepreneur John Peterman, whom Zahn met on a touring production of Bye Bye Birdie. They have a son, Henry James Zahn, born on April 3, 2000, and a daughter, Audrey Clair Zahn, born on April 25, 2002. On May 4, 2007, he was conferred an honorary Ph.D. in Fine Arts, from Northern Kentucky University.

Zahn is also a University of Kentucky sports fan, often seen at games and events.[7]