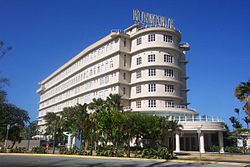 The Normandie Hotel, in San Juan, Puerto Rico, was inspired by the ocean liner SS Normandie and displays the ship's original sign

Streamline Moderne, or Art Moderne, is a late type of the Art Deco architecture and design that emerged in the 1930s. Its architectural style emphasized curving forms, long horizontal lines, and sometimes nautical elements. 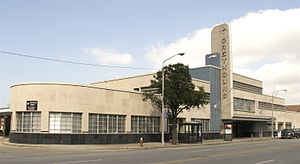 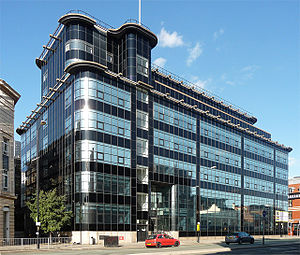 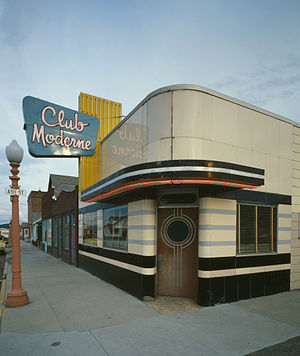 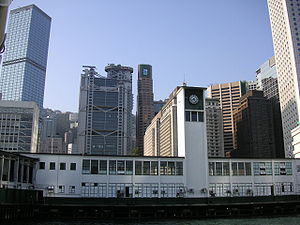 The first streamline architecture evolved from the work of New Objectivity artists, a movement connected to the German Werkbund, that was initiated by Hermann Muthesius (see e.g. Mossehaus).

As the Great Depression of the 1930s progressed, Americans saw a new aspect of Art Deco—i.e., streamlining, a concept first conceived by industrial designers who stripped Art Deco design of its ornament in favor of the aerodynamic pure-line concept of motion and speed developed from scientific thinking. Cylindrical forms and long horizontal windowing also may be influenced by constructivism. As a result, an array of designers quickly ultra-modernized and streamlined the designs of everyday objects. Manufacturers of clocks, radios, telephones, cars, furniture, and many other household appliances embraced the concept.

The style was the first to incorporate electric light into architectural structure. In the first-class dining room of the SS Normandie, fitted out 1933–35, twelve tall pillars of Lalique glass, and 38 columns lit from within illuminated the room. The Strand Palace Hotel foyer (1930), preserved from demolition by the Victoria and Albert Museum during 1969, was one of the first uses of internally lit architectural glass, and coincidentally was the first Moderne interior preserved in a museum.

Art Deco and Streamline Moderne were not necessarily opposites. Streamline Moderne buildings with a few Deco elements were not uncommon but the prime movers behind streamline design (Raymond Loewy, Walter Dorwin Teague, Gilbert Rohde, Norman Bel Geddes) all disliked Art Deco, seeing it as effete and falsely modern—essentially a fraud.

PWA Moderne was a related style in the United States of buildings completed between 1933 and 1944 as part of relief projects sponsored by the Public Works Administration (PWA) and the Works Progress Administration (WPA).

The Normandie Hotel, which opened during 1942, is built in the stylized shape of the ocean liner SS Normandie, and it includes the ship's original sign. The Sterling Streamliner Diners were diners designed like streamlined trains.

Although Streamline Moderne houses are less common than streamline commercial buildings, residences do exist. The Lydecker House in Los Angeles, built by Howard Lydecker, is an example of Streamline Moderne design in residential architecture. In tract development, elements of the style were frequently used as a variation in postwar row housing in San Francisco's Sunset District.

The style was applied to appliances such as electric clocks, sewing machines, small radio receivers and vacuum cleaners. Their manufacturing processes exploited developments in materials science including aluminium and bakelite. Compared to Europe, the United States in the 1930s had a stronger focus on design as a means to increase sales of consumer products. Streamlining was associated with prosperity and an exciting future. This hope resonated with the American middle class, the major market for consumer products. A wide range of goods from refrigerators to pencil sharpeners was produced in streamlined designs.

Streamlining became a widespread design practice for automobiles, railroad cars, buses, and other vehicles in the 1930s. Notable automobile examples include the 1934 Chrysler Airflow, the 1950 Nash Ambassador "Airflyte" sedan with its distinctive low fender lines, as well as Hudson's postwar cars, such as the Commodore, that "were distinctive streamliners—ponderous, massive automobiles with a style all their own".[1]

Streamline style can be contrasted with functionalism, which was a leading design style in Europe at the same time. One reason for the simple designs in functionalism was to lower the production costs of the items, making them affordable to the large European working class.[2] Streamlining and functionalism represent two very different schools in modernistic industrial design, but both reflecting the intended consumer.

In architecture and design