Sultan Husayn (also known as Soltan Hosayn and Soltan Hosein), (October 1668 – November 1726) (Persian: شاه سلطان حسین‎‎) reigned 1694–1722; was a Safavid Shah of Iran (Persia). He ruled from 1694 until he was overthrown in 1722 by rebellious marauder Mahmud Hotaki, an Afghan of Pashtun ethnic background.[2] His reign saw the downfall of the Safavid dynasty, which had ruled Persia since the beginning of the 16th century.

When his father Shah Suleiman was on his deathbed, he asked his court eunuchs to choose between his two sons, saying that if they wanted peace and quiet they should pick the elder, Sultan Husayn, but if they wanted to make the empire more powerful then they should opt for the younger, Abbas. They decided to make Sultan Husayn shah. He had a reputation for being easy-going and had little interest in political affairs, his nickname being Yakhshidir ("Very well!"), the response he was said to give when asked to decide on matters of state. The young king was a devout Muslim and one of his first acts was to give power to the leading cleric Muhammad Baqer Majlesi. A series of measures against the Sufi order were introduced as well as legislation prohibiting the consumption of alcohol and opium and restrictions on the behaviour of women in public. Provincial governors were ordered to enforce Sharia law.[3][4]

However, power soon shifted away from Muhammad Baqer Majlesi to Sultan Husayn's great aunt, Maryam Begum (the daughter of Shah Safi). Under her influence, Hosein became an alcoholic and paid less and less attention to political affairs, devoting his time to his harem and his pleasure gardens.[5] 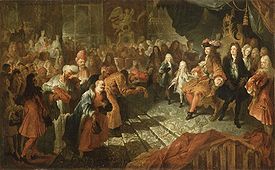 Sultan Husayn's rule was relatively tranquil until he faced a major revolt in Afghanistan, in the easternmost part of his realm. The Afghans were divided into two main tribes: the Ghilzais and the Abdalis. In 1709, the Ghilzai Afghans of Kandahar, under their leader Mirwais, rebelled and successfully broke away from Safavid rule.[6] In 1716, the Abdalis of Herat followed their example and Safavid expeditions to bring them back under control ended in failure. The Abdalis then turned on the Ghilzais but were defeated by Mahmud Hotaki, one of Mirwais' son.[7]

In the meantime, Sultan Husayn was confronted by other rebellions resulting from his religious policy. The revival of Shia Islam promoted by Muhammad Baqer Majlesi and his successor and grandson, the chief mullah Muhammad Hosein, had led to increased intolerance towards Sunni Muslims, Jews and Christians (particularly Georgians and Armenians). The shah had also passed a decree ordering the forced conversion of Zoroastrians. In 1717–20, the Sunnis of Kurdistan and Shirvan revolted. In Shirvan the rebels called on their fellow Sunnis, the Ottoman Turks and Lezgin tribesmen, to aid them. When the Lezgins took Shamakhi, the main town of Shirvan, in 1721 they massacred the Shia population including the governor. Writer Jonas Hanway wrote that "the city was ransacked".[8] Sultan Hossein was faced with problems elsewhere in his realm – Arab pirates seized islands in the Persian Gulf and there were plagues in the north-western provinces – but he and his court failed to take decisive action.[9]

In June 1722, Peter the Great, the then tsar of the neighbouring Russian Empire, declared war on Safavid Iran in an attempt to expand Russian influence in the Caspian and Caucasus regions and to prevent its rival, Ottoman Empire, from territorial gains in the region at the expense of declining Safavid Iran.

The Russian victory ratified for Safavid Irans' cession of their territories in the Northern, Southern Caucasus and contemporary mainland Northern Iran, comprising the cities of Derbent (southern Dagestan) and Baku and their nearby surrounding lands, as well as the provinces of Gilan, Shirvan, Mazandaran, and Astrabad to Russia per the Treaty of Saint Petersburg (1723).[10]

The siege of Isfahan

However, the main threat came from the Ghilzai Afghans. In 1722, Mahmud and his army swept westward aiming at the shah's capital Isfahan itself. Rather than biding his time within the city and resisting a siege in which the small Afghan army was unlikely to succeed, Sultan Husayn marched out to meet Mahmud's force at Golnabad. Here, on 8 March, the royal army was thoroughly routed and fled back to Isfahan in disarray. The shah was urged to escape to the provinces to raise more troops but he decided to remain in the capital which was now encircled by the Afghans. Mahmud's siege of Isfahan lasted from March to October, 1722. Lacking artillery, he was forced to resort to a long blockade in the hope of starving the Persians into submission. Sultan Husayn's command during the siege displayed his customary lack of decisiveness and the loyalty of his provincial governors wavered in the face of such incompetence. Protests against his rule also broke out within Isfahan and the shah's son, Tahmasp, was eventually elevated to the role of co-ruler. In June, Tahmasp managed to escape from the city in a bid to raise a relief force in the provinces, but little came of this plan. Starvation and disease finally forced Isfahan into submission (it is estimated that 80,000 of its inhabitants died during the siege). On 23 October, Soltan Hossein abdicated and acknowledged Mahmud as the new shah of Persia.[11]

To begin with, Mahmud treated Sultan Husayn considerately, but as he gradually became mentally unbalanced he began to view the former shah with suspicion. In February 1725, believing a rumour that one of Sultan Husayn's sons, Safi Mirza, had escaped, Mahmud ordered the execution of all the other Safavid princes who were in his hands, with the exception of Sultan Husayn himself. When Sultan Husayn tried to stop the massacre, he was wounded, but his action saved the lives of two of his young children. Mahmud succumbed to insanity and died on 25 April of the same year.[12]

Mahmud's successor Ashraf at first treated the deposed shah with sympathy. In return, Sultan Husayn gave him the hand of one of his daughters in marriage, a move which would have increased Ashraf's legitimacy in the eyes of his Persian subjects. However, Ashraf was involved in a war with the Ottoman Empire, which contested his claim to the Persian throne. In the autumn of 1726, the Ottoman governor of Baghdad, Ahmad Pasha, advanced with his army on Isfahan, sending a message to Ashraf saying that he was coming to reinstate the rightful shah of Persia. In response, Ashraf had Sultan Husayn's head cut off and sent it to the Ottoman with the message that "he expected to give Ahmad Pasha a fuller reply with the points of his sword and his lance". As Michael Axworthy comments, "In this way Shah Soltan Hossein gave in death a sharper answer than he ever gave in life".[13]