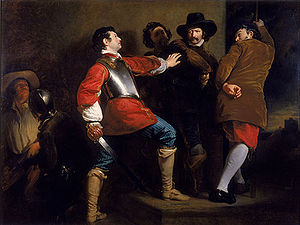 The Discovery of the Gunpowder Plot and the Taking of Guy Fawkes (c. 1823) by Henry Perronet Briggs; Knyvet wears the breastplate

He was a Gentleman of the Privy Chamber to Queen Elizabeth I, and in 1592 was made Master at Arms. He was elected Member of Parliament for Thetford in 1601.

On 21 July 1597 Knyvet married Elizabeth Hayward, the daughter of Sir Rowland Hayward and widow of Richard Warren of Claybury, Essex. He was granted the manor of Stanwell in 1603.[4] He was knighted in 1604.[5]

Knyvet was the most active intervener in foiling the Gunpowder Plot. On the evening of 26 October 1605, the Catholic Lord Monteagle received an anonymous letter warning him to stay away from Parliament during the opening, and to "retyre youre self into yowre contee whence yow maye expect the event in safti for ... they shall receyve a terrible blowe this parleament".[6] Monteagle's letter was shown to King James. The King ordered Knyvet to conduct a search of the cellars underneath Parliament, which he carried out with Edmund Doubleday in the early hours of 5 November. Guy Fawkes was found by Knyvet leaving the cellar, shortly after midnight, and arrested. Inside, the barrels of gunpowder were discovered hidden under piles of firewood and coal.[7]

After foiling the plot Knyvet was given charge of the education of the short-lived Princess Mary. By royal grant of a peerage he entered the House of Lords as Baron Knyvet of Escrick, Yorkshire in 1607. He was appointed a Privy Councillor, Member of the Council to Queen Anne, and Warden of the Mint. In 1613, the manor of Staines was granted him outright.[8]

He maintained a long-running feud with Edward de Vere, 17th Earl of Oxford. Knyvet's niece, Anne Vavasour, was the Earl's mistress, and on 21 March 1581 bore his illegitimate son, Edward Vere. On numerous occasions, servants on either side were killed.[citation needed] On one occasion, Knyvet injured Oxford, apparently in the leg.

When Lord Knyvet died in July 1622 his will provided for the foundation of a free-school in Stanwell — the Lord Knyvet School was founded in 1624. An effigy of him and his wife features in the chancel of Stanwell's St Mary's parish church.[9]

Knyvet occupied the first house known on the site of 10 Downing Street, the modern-day residence of the British Prime Minister, in a large timber and brick building with an L-shaped garden.[5] It was first leased to him in 1581 by Queen Elizabeth I at which point it became known as Knyvet House, and his lifetime lease was extended in 1604 to extend to his heirs.[5] The house was described by the parliamentary commissioners in 1650 as:

“...built part wth Bricke and part wth Tymber and Flemish qalle and covered with Tyle, consistinge of a Large and spacious hall, wainscoted round, well Lighted, and Paved wth brick Pavements, two parls whereof one is Wainscoted round from the seelinge to ye floor, one Buttery, one seller, one Large kitchen well paved with stone and well fitted and Joynted and well fitted wth dreser boards….

“And above stayres in the first story one large and spacious dyneinge Roome, Wainscoted round from the seelinge to the floore, well flored, Lighted and seeled, and fitted wth a faire Chimney wth a foote pace of Paynted Tyle in the same. Also 6 more Roomes and 3 Closetts in the same flore all well lighted and seeled. And in the second story 4 garretts...”

The house passed to his niece, Elizabeth Hampden, in whose lifetime, whether purposefully it adopted her surname and whose nephew was Oliver Cromwell.[5] After the lease expired on Hampden House and garden in 1682, George Downing redeveloped the site and adjoining premises.