From Infogalactic: the planetary knowledge core
Jump to: navigation, search
For the rugby league footballer of the 1910s for England, and Dewsbury, see Thomas Milner.
For other people named Thomas Gibson, see Thomas Gibson (disambiguation).

Thomas Milner Gibson came of a Suffolk family, but was born in Port of Spain, Trinidad, where his father was serving as an officer in the army. He was educated in Trinidad, in a school at Higham Hill also attended by Benjamin Disraeli, at Charterhouse, and at Trinity College, Cambridge, where he graduated in 1830.[1]

In 1837 Gibson was elected to parliament as Conservative member for Ipswich, but resigned two years later, having adopted Liberal views, and became an ardent supporter of the free-trade movement. As one of Cobden's chief allies, he was elected to the House of Commons as Member of Parliament for Manchester in 1841, and from 1846 to 1848 he was Vice-President of the Board of Trade in Lord John Russell's ministry. Though defeated in Manchester in 1857, he found another seat for Ashton-under-Lyne, and sat in the cabinet under Lord Palmerston and then Russell from 1859 to 1866 as President of the Board of Trade. In 1846 he was sworn of the Privy Council.[2]

Gibson was the leading spirit in the movement for the repeal of taxes on knowledge, and his successful efforts on behalf of journalism and advertising were recognized by a public testimonial in 1862. He retired from political life in 1868, but he and his wife, whose salon was a great Liberal centre, were for many years very influential in society. Milner Gibson was a sportsman and a typical man of the world, who enjoyed life and behaved liberally to those connected with him. 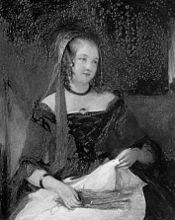 Gibson also had a relationship with Susannah Bowles, a servant girl. Their son, Thomas Gibson Bowles, became a noted publisher and was the maternal grandfather of the Mitford sisters.