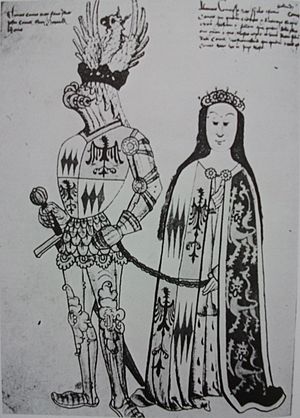 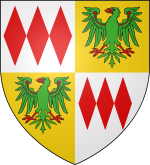 Thomas Montagu, 4th Earl of Salisbury, 6th and 3rd Baron Montagu, 5th Baron Monthermer, and Count of Perche, KG (13 June 1388 – 3 November 1428) of Bisham in Berkshire, was an English nobleman and one of the most important English commanders during the Hundred Years' War.

He was the eldest son of John Montagu, 3rd Earl of Salisbury (d.1400), who was killed while plotting against King Henry IV in 1400, and his lands forfeited, later partly retrieved by Thomas. His mother was Maud Francis, daughter of Sir Adam Francis (born ca. 1334), Mayor of London. 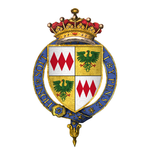 Thomas was summoned to Parliament as Earl of Salisbury in 1409, although he was not formally invested as earl until 1421. In 1414 he was made a Knight of the Garter. In July 1415 he was one of the seven peers who tried Richard, Earl of Cambridge on charges of conspiring against King Henry V. Montagu then joined King Henry V in France, where he fought at the Siege of Harfleur and at the Battle of Agincourt. Montagu fought in various other campaigns in France in the following years. In 1419 he was appointed lieutenant-general of Normandy and created Count of Perche, part of Henry V's policy of creating Norman titles for his followers. He spent most of the rest of his life as a soldier in France, leading troops in the various skirmishes and sieges that were central to that part of the Hundred Years' War. In 1425 he captured the city of Le Mans and fought at the Siege of Orléans in 1428 at which he lost his life.

On 27 October 1428 he was wounded during the Siege of Orléans, when a cannonball broke a window near to where he stood, and died a few days later.