Thomas Nettleship Staley was born 17 January 1823 in Sheffield, Yorkshire, England. His father was minister William Staley.[1] Staley entered Queens' College, Cambridge in 1840, earned his BA in 1844, and became a Fellow in 1847 after earning his MA.[2] He was Tutor at St. Mark's College, Chelsea 1844-48 and Headmaster of the St. Mark's Practising School 1848-50 (whilst still lecturing at St. Mark's College) and then Principal of the Collegiate School, Wandsworth. He married Catherine Workman Shirley Staley in September 1850.[1]

He was appointed by John Bird Sumner, the Archbishop of Canterbury, and consecrated on 15 December 1861, at the suggestion of Samuel Wilberforce and Queen Victoria, as the church's first bishop of the Kingdom of Hawaii. He and his wife departed on 17 August 1862 and arrived in Honolulu in October 1862, a few weeks after the death of Albert, Prince of Hawaii, the only son of King Kamehameha IV and Queen Emma Kaleleonālani Naʻea. 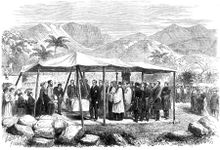 His presence provoked conflict with the American Board of Commissioners for Foreign Missions because they considered him a symbol of ritualism. The fact that he was a Bishop also bothered the Calvinists who disliked any kind of religious hierarchy. In a letter to Rufus Anderson of the American Board, British missionary William Ellis (who had visited the Hawaiian islands in 1825) wrote that Staley was "associated with that section of the Church of England from which the greatest number of perverts to Popery has proceeded, and between whom and the Roman Catholics the difference is reported to be slight..."[3] Even the American writer Mark Twain criticized Staley as an agent of Britain.[4]

Staley publicly defended his actions as being non-political, but was considered symbolic of the struggle for influence on the islands. Although he was appointed to the King's Privy Council 1863–1864 and Board of Education in 1865,[5] he denied ever giving political advice, or being behind any plots leading to British colonization of the islands.[6] In December 1863 he held the memorial service for Kamehameha IV, and later dedicated the Royal Mausoleum where the royal family was reburied. The next King Kamehameha V would continue his support, and the cornerstone for the Cathedral Church of Saint Andrew was laid in a ceremony in March 1867. Staley began two church-operated boarding schools: Saint Andrew's Priory School for Girls and ʻIolani School in Honolulu (originally named for Saint Alban). Staley was appointed Chaplain of Hawaii's Royal Order of Kamehameha I.

He corresponded with Charles Darwin regarding the decline in population of the native Hawaiians.[7]

Staley was frustrated with the political struggle, and suggested he would like to resign. He hoped to be replaced by an American Episcopal bishop, but none could be found. He retired in 1870, and was replaced by Alfred Willis. He resided in Croxall,[8] and died on 1 November 1898, at Bournemouth.