Samuel Wilberforce FRS (7 September 1805 – 19 July 1873) was an English bishop in the Church of England, third son of William Wilberforce. Known as "Soapy Sam", Wilberforce was one of the greatest public speakers of his day.[1] The nickname derives from a comment by Benjamin Disraeli that the bishop's manner was "unctuous, oleaginous, saponaceous". He is probably best remembered today for his opposition to Charles Darwin's theory of evolution — most notably at a famous debate in 1860.

Wilberforce was born at Clapham Common, London. He was the son of William Wilberforce, a major campaigner against the slave trade and slavery and Barbara Spooner, and the younger brother of Robert Isaac Wilberforce. In 1823 he entered Oriel College, Oxford. In the United Debating Society, which afterwards developed into the Union, he distinguished himself as a zealous advocate of liberalism. The set of friends with whom he chiefly associated at Oxford—among them William Ewart Gladstone and Henry Manning—were sometimes named, on account of their exceptionally decorous conduct, the "Bethel Union"; but he was by no means averse to amusements, and specially delighted in hurdle jumping, nude running and hunting. He graduated in 1826, taking a first-class degree in mathematics and a second in classics.

He spent the summer and autumn of 1827 touring the continent. After his marriage on 11 June 1828 to Emily Sargent, daughter of John Sargent,[2] he was in December ordained to the Church of England and appointed curate-in-charge at Checkendon, near Henley-on-Thames.

In 1830, Wilberforce was presented by Charles Sumner, Bishop of Winchester, to the rectory of St. Mary's Church, Brighstone, in the Isle of Wight.[3] In this comparatively retired sphere he soon found scope for that manifold activity which so prominently characterized his subsequent career. In 1831 he published a tract on tithes, "to correct the prejudices of the lower order of farmers," and in the following year a collection of hymns for use in his parish, which had a large general circulation; a small volume of stories entitled the Note Book of a Country Clergyman; and a sermon, The Apostolical Ministry. At the close of 1837 he published the Letters and Journals of Henry Martyn, the Anglican missionary in India and Persia.

Although a High Churchman, Wilberforce held aloof from the Oxford Movement and in 1838 his divergence from the Tractarian writers became so marked that John Henry Newman declined further contributions from him to the British Critic, not deeming it advisable that they should longer "co-operate very closely".[citation needed] In 1838 Wilberforce published, with his elder brother Robert Wilberforce, the Life of his father and, two years later, his father's Correspondence. In 1839 he also published Eucharistica (from the old English divines), to which he wrote an introduction, Agathos and other Sunday Stories, and a volume of University Sermons, and in the following year Rocky Island and other Parables. In November 1839 he was installed archdeacon of Surrey, in August 1840 was collated canon of Winchester and in October he accepted the rectory of Alverstoke.

In 1841, he was chosen as the Bampton lecturer and was shortly afterwards made chaplain to Prince Albert, an appointment he owed to the impression produced by a speech at an anti-slavery meeting some months previously. In October 1843, he was appointed by the Archbishop of York to be sub-almoner to the Queen. In 1844 his A History of the Protestant Episcopal Church in America appeared. In March 1845 he accepted the position of Dean of Westminster and, in October the same year, was appointed as the Bishop of Oxford.

The bishop in 1847, upon the suggestion of John Henry Newman, became involved in the Hampden controversy,[4] and signed the remonstrance of the thirteen bishops to Lord John Russell against Hampden's appointment to the bishopric of Hereford. He also endeavoured to obtain satisfactory assurances from Hampden; but, though unsuccessful in this, he withdrew from the suit against him. The publication of a papal bull in 1850 establishing a Roman hierarchy in England brought the High Church party, of whom Wilberforce was the most prominent member, into temporary disrepute. The secession to the Church of Rome of his brother-in-law, afterwards Cardinal Manning, and then of his brothers, as well as his only daughter and his son-in-law, Mr and Mrs J. H. Pye, brought him under further suspicion, and his revival of the powers of Convocation lessened his influence at court; but his unfailing tact and wide sympathies, his marvellous energy in church organization, the magnetism of his personality, and his eloquence both on the platform and in the pulpit gradually won for him recognition as without a rival on the episcopal bench. 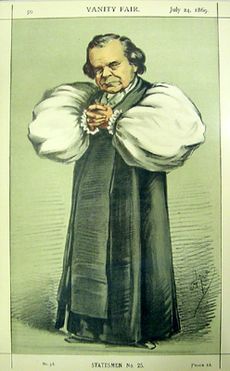 Cartoon of Wilberforce in the 1860 Huxley-Wilberforce debate, published in Vanity Fair, 1869

His diary reveals a tender and devout private life which has been overlooked by those who have only considered the versatile facility and persuasive expediency that marked the successful public career of the bishop, and perhaps earned him the sobriquet of "Soapy Sam", though this may have been a reference to his characteristic hand-washing gesture, captured in the Vanity Fair cartoon by 'Ape' (illustration, right). In the House of Lords he took a prominent part in the discussion of social and ecclesiastical questions. He has been styled the "bishop of society"; but society occupied only a fraction of his time. The great bent of his energies was ceaselessly directed to the better organization of his diocese and to the furtherance of schemes for increasing the influence and efficiency of the church.

In 1854, he opened a theological college at Cuddesdon, now known as Ripon College Cuddesdon, which was afterwards the subject of some controversy on account of its alleged Romanist tendencies.

He took part in the famous 1860 debate concerning evolution at a meeting of the British Association on 30 June. Richard Owen and Thomas Henry Huxley had already clashed on man's position in nature two days previously; on the Saturday, at the Oxford University Museum of Natural History, Wilberforce got his chance to criticise Charles Darwin's On the Origin of Species by means of Natural Selection, especially the implication that humans and various species of apes share common ancestors.[5]

Lucas argues that "Wilberforce, contrary to the central tenet of the legend, did not prejudge the issue".[6] He criticised Darwin's theory on scientific grounds, arguing that it was not supported by the facts, and he noted that the greatest names in science were opposed to the theory.[6] Nonetheless, Wilberforce's speech is generally only remembered today for his inquiry as to whether it was through his grandmother or his grandfather that Huxley considered himself descended from a monkey. Thomas Huxley is said to have replied that he would not be ashamed to have a monkey for his ancestor, but he would be ashamed to be connected with a man who used his great gifts to obscure the truth. Darwin was not present, but several of his friends replied, with Huxley perhaps the most effective. The general view was and still is that Huxley had got the better of the exchange but there are dissenting voices,[6] and Wilberforce himself thought he had done well. 'Reports from the time suggest that everybody enjoyed himself immensely, and all went cheerfully off to dinner together afterwards.'.[7] As a son of William Wilberforce he was deeply concerned about the ethical consequences of what we now call Social Darwinism.[citation needed] 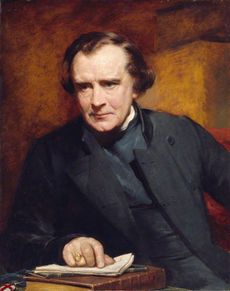 To see Wilberforce in the full glory of his social status and reputation, it is perhaps enough to recall that he was not merely Bishop of Oxford (a grand enough post in the nineteenth century) but Lord Bishop of Oxford, a member of the House of Lords and a Fellow of the Royal Society. This last distinction is rarely mentioned in accounts of the famous Oxford debate.

His attitude towards Essays and Reviews in 1861, against which he wrote an article in the Quarterly, won him the special gratitude of the Low Church party, and latterly he enjoyed the full confidence and esteem of all except the extreme men of either side and party. It was also Wilberforce who proclaimed eminent geologist Sir Roderick Murchison the unofficial King of Siluria. On the publication of John William Colenso's Commentary on the Romans in 1861, Wilberforce endeavoured to induce the author to hold a private conference with him; but after the publication of the first two parts of the Pentateuch Critically Examined he drew up the address of the bishops which called on Colenso to resign his bishopric. In 1867 he framed the first Report of the Ritualistic Commission, in which coercive measures against ritualism were discountenanced by the use of the word "restrain" instead of "abolish" or "prohibit." He also endeavoured to take the sting out of some resolutions of the second Ritualistic Commission in 1868, and was one of the four who signed the Report with qualifications. Though strongly opposed to the disestablishment of the Irish Church, yet, when the constituencies decided for it, he advised that no opposition should be made to it by the House of Lords. After twenty-four years in the diocese of Oxford, he was translated by Gladstone to the bishopric of Winchester. He was killed on 19 July 1873, by the shock of a fall from his horse near Dorking, Surrey.

Wilberforce left three sons. The eldest, Reginald, was the author of An Unrecorded Chapter of the Indian Mutiny (1894), criticised by his fellow officers of the 52nd Foot for its inaccuracy.[10] Reginald was grandfather (through his fourth son, judge Samuel) to Richard Lord Wilberforce, a Lord of Appeal.

His two younger sons both attained distinction in the English church. Ernest (1840–1908) was Bishop of Newcastle-upon-Tyne from 1882 to 1895, and Bishop of Chichester from 1895 till his death. Basil (1841–1916) was appointed canon residentiary of Westminster in 1894, chaplain of the House of Commons in 1896 and Archdeacon of Westminster in 1900; he published several volumes of sermons.

Wilberforce is the main villain of Gideon Defoe's novel The Pirates! In an Adventure with Scientists, where his opposition to Darwin is based in his part-ownership of a circus freakshow. He feels that Darwin's discovery (depicted in this book as teaching a chimpanzee to talk using note cards) will take away from his attraction's popularity, which he uses to kidnap young women and turn them into soap, hence his nickname.