From Infogalactic: the planetary knowledge core
Jump to: navigation, search
For other uses, see Thunderbolt (disambiguation).

Zeus' head and thunderbolt on a coin from Epirus, 234 BC.

The thunderbolt pattern with an eagle on a coin from Olympia, Greece, 432-c.421 BC. 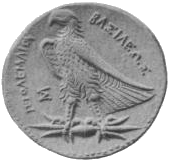 Coin of Ptolomaic Egypt showing Zeus as an Eagle, holding a thunderbolt

A thunderbolt or lightning bolt is a symbolic representation of lightning when accompanied by a loud thunderclap. In ancient Hellenic and Roman religious traditions, the thunderbolt represents Zeus or Jupiter (etymologically 'Sky Father'), thence the origin and ordaining pattern of the universe, as expressed in Heraclitus' fragment describing "the Thunderbolt that steers the course of all things".[1] It is the same in other Indo-European traditions, for example the Vedic Vajra.

In its original usage the word may also have been a description of the consequences of a close approach between two planetary cosmic bodies, as Plato suggested in Timaeus,[2] or, according to Victor Clube, meteors,[3] though this is not currently the case. As a divine manifestation the thunderbolt has been a powerful symbol throughout history, and has appeared in many mythologies. Drawing from this powerful association, the thunderbolt is often found in military symbolism and semiotic representations of electricity. 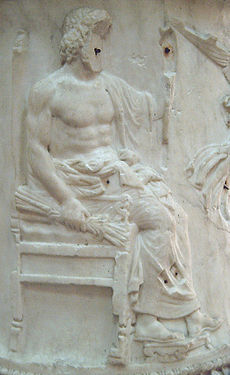 Lightning plays a role in many mythologies, often as the weapon of a sky god and weather god. As such, it is an unsurpassed method of dramatic instantaneous retributive destruction: thunderbolts as divine weapons can be found in many mythologies.

The name "thunderbolt" or "thunderstone" has also been traditionally applied to the fossilised rostra of belemnoids. The origin of these bullet-shaped stones was not understood, and thus a mythological explanation of stones created where a lightning struck has arisen.[5]

In the modern world

The thunderbolt or lightning bolt continues into the modern world as a prominent symbol; it has entered modern heraldry and military iconography.