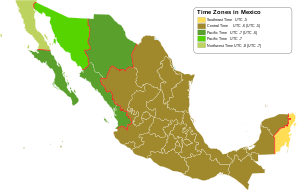 In addition, the law dictates that all island territories should fall within the time zone corresponding to their geographic location.

It was decreed in 1942 that the Hora del Noroeste (105° W) should cover only the states of Baja California Sur, Sonora, Sinaloa, and Nayarit; while the Hora del Centro (90° W) was used for the rest of the country.[4]

First observation of DST was in 1931, but only for the state of Baja California. It used the "Hora del Centro" from April 1 to September 30, and the "Hora del Oeste" the rest of the year.[2] Until 1996, Baja California was the only Mexican state to observe DST, coinciding with the observance of DST across the border in San Diego, California.

Daylight saving time has been observed in Mexico beginning in 1996.[6] For municipalities located less than 20 km from the US border, such as Ciudad Juarez, and the entire state of Baja California (Norte),[7] it coincides with the longer extended daylight saving period adopted for 2007 in the United States. But in the rest of the country, daylight saving time is observed between 2 a.m. on the first Sunday in April through 2 a.m. on the last Sunday in October.[8] Quintana Roo and Sonora states do not observe DST.

As the United States starts DST on the second Sunday in March and ends it on the first Sunday in November, Mexico's time zones are out of synchronization with American and Canadian time zones for two periods each year. The first is the three or four weeks between the second Sunday in March and the first Sunday in April. The second is the single week between the last Sunday in October and the first Sunday in November. During these periods, clocks in Mexico City match those in Denver rather than those in Chicago. The Mexican Stock Exchange changes its hours during these periods in order to maintain synchronization with the U.S. markets. Conversely, television schedules are not changed for these situations, meaning Mexican television networks which are carried directly by American cable and satellite services have their programming aired an hour ahead or behind in the United States during these interregnums.

In 1998 the state of Chihuahua moved from Central time to Mountain time.[9] This is likely because Ciudad Juárez is directly across the border from El Paso, Texas, which is on Mountain Time. Later in 2001 Mexico experimented with a shorter daylight saving period from the first Sunday in May till the last Sunday in September.[10] The areas within 20 km of the United States border, as well as all of Baja California, began observing DST on the US schedule in 2010.[7]

Daylight saving time is observed in all parts of the country except for the states of Quintana Roo, and Sonora, which decided to remain on standard time beginning in 1999.[11] This is to coincide with the non-observation in Arizona, with which Sonora shares its northern border. The island territories do not currently observe daylight time either. During DST period, Mexico uses 4 different time zones.

On 2010-01-06 a zone America/Ensenada named for Ensenada, Baja California was scheduled for inclusion with the comment "Split off Mexican cities (near US border) that are to follow US rules starting in 2010. Tijuana splits into Tijuana and Ensenada".[12]