The trigonal point group describes the symmetry of an object produced by stretching a cube along the body diagonal. The resultant rhombohedral (or trigonal) Bravais lattice is generated by three primitive vectors of equal length that make equal angles with one another.[1]

There are two descriptions (settings) of the rhombohedral lattice system.

In practice, the hexagonal description is more commonly used because it is easier to deal with coordinate system with two 90° angles. However, the rhombohedral axes are often shown in textbooks because this cell reveals 3m symmetry of crystal lattice. The relation between two settings is given below. 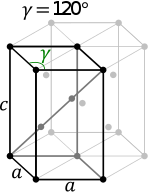 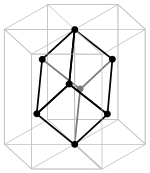 The trigonal crystal system is the only crystal system whose point groups have more than one lattice system associated with their space groups: the hexagonal and rhombohedral lattices both appear.

The 5 point groups in this crystal system are listed below, with their international number and notation, their space groups in name and example crystals. (All these point groups are also associated with some space groups not in the rhombohedral lattice system.)[3][2][4]