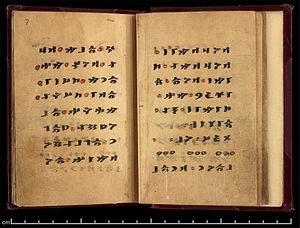 Turkic mythology embraces Tengriist and Shamanist traditions as well as all cultural and social subjects being a nomad folk. Later, especially after Turkic migration some of the myths were decorated with Islamic symbols. It has many common points with Aegean and Anatolian mythologies (Greek and Hittite) as well as Mongol mythology. Turkic mythology was influenced by other local mythologies. For example, in Tatar mythology elements of Finnic and Indo-European myth co-exist. Subjects from Tatar mythology include Äbädä, Alara. Şüräle, Şekä, Pitsen, Tulpar, and Zilant. Besides Buddhism, Turkic mythology was influenced by Zoroastrianism and Manichaeism.

Irk Bitig, a 10th-century manuscript found in Dunhuang is one of the most important sources for Turkic mythology and religion. This book is written in Old Turkic alphabet like the Orkhon inscriptions.

Tengri is one of the names for the primary chief deity in the religion of the early Turkic people. He was known as Kök or Kok tengri (meaning sky god) after the Turks started to migrate and leave middle Asia, and see monotheistic religions Tengrism was changed from its pagan/politheistic origins. The religion was more like zoroastrianism after its change, with only two of the original gods remaining, Tengri, representing the good god and Uçmak ( a place like heaven or vallhalla), while Erlik took the position of the bad god and hell. The words Tengri and Sky were synonyms. It is unknown how Tengri looks. He rules the fates of entire people and acts freely. But he is fair as he awards and punishes. The well-being of people depends on his will. Tengri worship is first attested in the Old Turkic Orkhon inscriptions of the early 8th century.

Öd Tengri Is the god of time being not well-known, as it states in the orhun stones, "Öd tengri is the ruler of time".

Boz Tengri Like öd tengri, he is not known much. He is seen as the god of the grounds and steppes.

Kayra is the Spirit of God and creator god.

Ülgen is the son of Kayra and the god of goodness. The Aruğ (Arı) denotes to "good spirits" in Turkic and Altaic mythology. They are under the order of Ülgen and doing good things on earth.[1]

Erklikhan is the god of death and the underworld. Also a god of the manly seem, since his name Erklik is also used for male. Later Erlik was used depriving him of this rather anti-hero status. The han in his name is put ther because of his ruler position (ruler of hell).

Ay Dede is the moon god.

Gün Ana is the sun goddess.

As a result of the nomad culture, the horse is also one of the main figures of Turkic mythology; Turks considered the horse an extension of the individual -though generally dedicated to the male- and see that one is complete with it. This might have led to or sourced from the term "at-beyi" (horse-lord).

The dragon (Evren, also Ebren), also expressed as a snake or lizard, is the symbol of might and power. It is believed, especially in mountainous Central Asia, that dragons still live in the mountains of Tian Shan/Tengri Tagh and Altay. Dragons also symbolize the god Tengri (Tanrı) in ancient Turkic tradition, although dragons themselves are not worshiped as gods.

The World Tree or Tree of Life is a central symbol in Turkic mythology. According to the Altai Turks, human beings are descended from trees. According to the Yakuts, White Mother sits at the base of the Tree of Life, whose branches reach to the heavens where it is occupied by various creatures that have come to life there. The blue sky around the tree reflects the peaceful nature of the country and the red ring that surrounds all of the elements symbolizes the ancient faith of rebirth, growth and development of the Turkic peoples.

The wolf symbolizes honor and is also considered the mother of most Turkic peoples. Asena is the name of one of the ten sons who were given birth by a mythical wolf in Turkic mythology.[2][3][4][5]

The legend tells of a young boy who survived a raid on his village. A she-wolf finds the injured child and nurses him back to health. He subsequently impregnates the wolf which then gives birth to ten half-wolf, half-human boys. One of these, Ashina, becomes their leader and establishes the Ashina clan which ruled the Göktürks and other Turkic nomadic empires.[6][7] The wolf, pregnant with the boy's offspring, escaped her enemies by crossing the Western Sea to a cave near to the Qocho mountains, one of the cities of the Tocharians. The first Turks subsequently migrated to the Altai regions, where they are known as expert in ironworkers, as the Scythians are also known to have been.[8]

The Ergenekon legend tells about a great crisis of the ancient Turks. Following a military defeat, the Turks took refuge in the legendary Ergenekon valley where they were trapped for four centuries. They were finally released when a blacksmith created a passage by melting rock, allowing the gray wolf Asena to lead them out.[9][10][11][12][13][14] A New Year's ceremony commemorates the legendary ancestral escape from Ergenekon.[15]

The legend of Oghuz Khagan is a central political mythology for Turkic peoples of Central Asia and eventually the Oghuz Turks who ruled in Anatolia and Iran. Versions of this narrative have been found in the histories of Rashid ad-Din Tabib, in an anonymous 14th-century Uyghur vertical script manuscript now in Paris, and in Abu'l Ghazi's Shajara at-Turk and have been translated into Russian and German.

Book of Dede Korkut from the 11th century covers twelve legendary stories of the Oghuz Turks, one of the major branches of the Turkish Peoples. It originates from the pre-Islamic period of the Turks, in which the Tengrism elements in the Turkish culture were still predominate. It consists of a prologue and twelve different stories. The legendary story which begins in Central Asia is narrated by a dramatis personae, in most cases by Dede Korkut himself.[16]

The legend of Timur

The legend of Timur (Temir) is the most ancient and well-known. Timur found a strange stone that fell from the sky (an iron ore meteorite), making the first iron sword from it. Today, the word "demir" means "iron".

5-kuruş-coin features the tree of life. 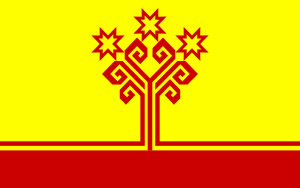 The Tree of Life, as seen as in flag of Chuvashia, a Turkic state in the Russian Federation