From Infogalactic: the planetary knowledge core
Jump to: navigation, search
This article is about the mountain. For district of Ürümqi, see Tianshan District.

The Chinese name for Tian Shan may be derived from the Xiongnu language name Qilian (Tsilien; Chinese: 祁连), which was described by Sima Qian in the Records of the Grand Historian as the homeland of the pre-Xiongnu peoples of the region, the Yuezhi, and has been said to refer to the Tian Shan rather than to the range 1,500 kilometres (930 mi) further east now known by this name.[1] The Tannu-Ola mountains in Tuva (Tuvan: Таңды-Уула) bear the same name ("heaven/celestial mountains" or "god/spirit mountains").

Tian Shan lies to the north and west of the Taklamakan Desert and directly north of the Tarim Basin in the border region of Kazakhstan, Kyrgyzstan and northwest China. In the south it links up with the Pamir Mountains and to north and east it meets the Altai Mountains of Mongolia. 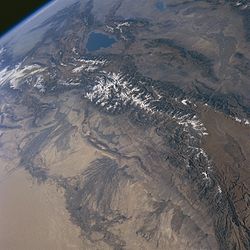 Tian Shan Mountains from space, October 1997, with Issyk-Kul Lake in Kyrgyzstan at the northern end

The Tian Shan are a part of the Himalayan orogenic belt, which was formed by the collision of the Indian and Eurasian plates in the Cenozoic era. They are one of the longest mountain ranges in Central Asia and stretch some 2,800 kilometres (1,700 mi) eastward from Tashkent in Uzbekistan.

The highest peak in the Tian Shan is the Victory Peak (пик Победы in Russian or Jengish Chokusu in Kyrgyz) which, at 7,439 metres (24,406 ft), is also the highest point in Kyrgyzstan and is on the border with China. The Tian Shan's second highest peak, Khan Tengri (Lord of the Spirits), straddles the Kazakhstan-Kyrgyzstan border and at 7,010 metres (23,000 ft) is the highest point of Kazakhstan. Mountaineers class these as the two most northerly peaks over 7,000 metres (23,000 ft) in the world.

The Torugart Pass, at 3,752 metres (12,310 ft), is located at the border between Kyrgyzstan and China's Xinjiang province. The forested Alatau ranges, which are at a lower altitude in the northern part of the Tian Shan, are inhabited by pastoral tribes that speak Turkic languages.

The Tian Shan are separated from the Tibetan Plateau by the Taklimakan Desert and the Tarim Basin to the south.

The major rivers rising in the Tian Shan are the Syr Darya, the Ili River and the Tarim River. The Aksu Canyon is a notable feature in the northwestern Tian Shan.

Continuous permafrost is typically found in the Tian Shan starting at the elevation of about 3,500-3,700 m above the sea level. Discontinuous alpine permafrost usually occurs down to 2,700-3,300 m, but in certain locations, due to the peculiarity of the aspect and the microclimate, it can be found at elevations as low as 2,000 m.[2]

One of the first Europeans to visit and the first to describe the Tian Shan in detail was the Russian explorer Peter Semenov, who did so in the 1850s.

Glaciers in the Tian Shan Mountains have been rapidly shrinking and have lost 27%, or 5.4 billion tons annually, of its ice mass since 1961 compared to an average of 7% worldwide.[3] It is estimated that by 2050 half of the remaining glaciers will have melted.

The Tian Shan have a number of named ranges which are often mentioned separately (all distances are approximate). 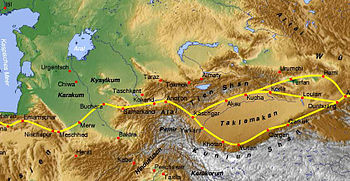 In China the Tian Shan starts north of Kumul City (Hami) with the U-shaped Barkol Mountains, from about 600 to 400 kilometres (370 to 250 mi) east of Ürümqi. Then the Bogda Shan (god mountains) run from 350 to 40 kilometres (217 to 25 mi) east of Ürümqi. Then there is a low area between Ürümqi and the Turfan Depression. The Borohoro Mountains start just south of Ürümqi and run west northwest 450 kilometres (280 mi) separating Dzungaria from the Ili River basin. Their north end abuts on the 200 kilometres (120 mi) Dzungarian Alatau which run east northeast along Sino-Kazakh border. They start 50 kilometres (31 mi) east of Taldykorgan in Kazakhstan and end at the Dzungarian Gate. The Dzungarian Alatau in the north, the Borohoro Mountains in the middle and the Ketmen Range in the south make a reversed Z or S, the northeast enclosing part of Dzungaria and the southwest enclosing the upper Ili valley.

File:Kyrgyzstan Topography.png
Kyrgyzstan (borders marked in red) The indentation on the west is the Fergana Valley 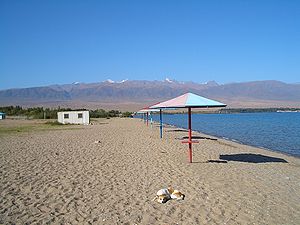 In Kyrgyzstan the main line of the Tian Shan continues as Narat Range from the base of the Borohoros west 570 kilometres (350 mi) to the point where China, Kazakhstan and Kyrgyzstan meet. Here is the highest part of the range – the Central Tian Shan, with Peak Pobeda (Kakshaal Too range) and Khan Tengri. West of this, the Tian Shan split into an ‘eye’, with Issyk Kul Lake in its center. The south side of the lake is the Terskey Alatau and the north side the Kyungey Ala-Too (shady and sunny Ala-Too). North of the Kyungey Ala-Too and parallel to it is the Trans-Ili Alatau in Kazakhstan just south of Almaty. West of the eye, the range continues 400 kilometres (250 mi) as the Kyrgyz Ala-Too, separating Chui Province from Naryn Oblast and then Kazakhstan from the Talas Province. This oblast is the upper valley of the Talas River, the south side of which is the 200 kilometres (120 mi) Talas Ala-Too Range ('Ala-too' is a Kirgiz spelling of Alatau). At the east end of the Talas Alatau the Suusamyr Too range runs southeast enclosing the Suusamyr Valley or plateau.

As for the area south of the Fergana Valley there is a 800 kilometres (500 mi) group of mountains that curves west-southwest from south of Issyk Kul Lake separating the Tarim Basin from the Fergana Valley. The Fergana Range runs northeast towards the Talas Ala-Too and separaties the upper Naryn basin from Fergana proper. The southern side of these mountains merge into the Pamirs in Tajikistan (Alay Mountains and Trans-Alay Range). West of this is the Turkestan Range, which continues almost to Samarkand.

On the north margin of the Tarim basin between the mountain chain of the Kokshaal-Tau in the south and that one of the Terskey Alatau in the north there stretches the 100 to 120 km wide Tian Shan plateau with its set up mountain landscape.The Kokshaal-Tau continues with an overall length of 570 km from W of Pik Dankowa (Dankov, 5986 m) up to east-north-east to Pik Pobedi (Tumor Feng, 7439 m) and beyond it. This mountain chain as well as that of the 300 km long parallel mountain chain of the Terskey Alatau and the Tian Shan plateau situated in between, during glacial times were covered by connected ice-stream-networks and a plateau glacier. Currently the interglacial remnant of this glaciation is formed by the only just 61 km long South Inylschek glacier. The outlet glacier tongues of the plateau glacier flowed to the north as far as down to Lake Issyk Kul (Lake) at 1605 (1609) m asl calving in this 160 km long lake.

Altogether the glacial Tian Shan glaciation occupied an area of c. 118 000 km² .The glacier snowline (ELA) as altitude limit between glacier feeding area and melting zone had decreased about 1200 altitude metres compared with today. Under the condition of a comparable precipitation ratio there would result from this a depression of the average annual temperature of 7.2 to 8.4 °C for the Würm-ice age (Last Glacial period = MIS 2) compared with today. [4] 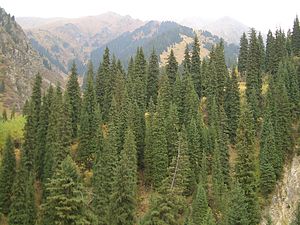 In the Trans-Ili Alatau (Shymbulak Valley)

The Tian Shan holds important forests of Schrenk's Spruce (Picea schrenkiana) at altitudes of over 2,000 metres (6,600 ft); the lower slopes have unique natural forests of wild walnuts and apples.[8]

In Daoism, Xi Wangmu, the Queen Mother of the West, is believed to guard the peach trees of immortality in the Tian Shan.

In Tengrism, Khan Tengri is the Lord of the Spirits and the religion's supreme deity.

At the 2013 Conference on World Heritage, the eastern portion of Tian Shan in western China's Xinjiang Region was listed as a World Heritage Site.[9]