From Infogalactic: the planetary knowledge core
Jump to: navigation, search
This article is about the historical Tory party. For modern pro-Ulster-Unionist party, see Scottish Unionist Party (1986).

Independent from, though associated with, the Conservative Party in England and Wales, it stood for election at different periods of its history in alliance with a small number of Liberal Unionist and National Liberal candidates. Those who successfully became Members of Parliament (MPs) would then take the Conservative Whip at Westminster just as the Ulster Unionists did until 1973. At Westminster the differences between the Scottish Unionist and the English party could appear blurred or non-existent to the external casual observer, especially as many Scottish MPs were prominent in the parliamentary Conservative party, such as party leaders Andrew Bonar Law (1911–1921 and 1922–1923) and Sir Alec Douglas-Home (1963–1965), both of whom served as Prime Minister of the United Kingdom.

The party traditionally did not stand at local government level but instead supported and assisted the Progressive Party in its campaigns against the British Labour Party. This relationship ended when the Conservatives started fielding their own candidates, who stood against both Labour and the Progressives.

The origins of the Scottish Unionist Party lie in the 1886 split of the British Liberal Party with the emergence of the Liberal Unionists under Joseph Chamberlain. The 'Union' in question was the 1800 Irish Union, not that of 1707. Prior to this, the only Tory/Conservative party in Scotland was the official Conservative Party, which had never achieved parity with the dominant Whig and Scottish Liberal Party ascendancy since the election reforms of 1832. The new Liberal Unionists quickly agreed to an electoral pact with the Conservative Party in Britain, and in Scotland this pact overcame the former electoral dominance of the Scottish Liberals. 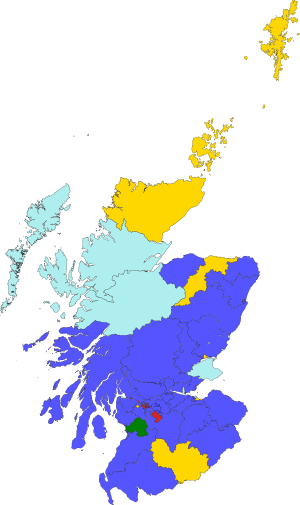 Map of the results of the 1931 election in Scotland; when the Unionists won a record 66% of Scottish seats.

Popular imperial unity was the central thread of the Scottish Unionist Party's belief system. While it was the prospect of Irish Home Rule that set the circumstances for the party's creation, it was not the principle of autonomy they opposed, but the belief that Irish independence would lead to the break-up of the British Empire. This was demonstrated by their acceptance and support of Dominion status for colonies such as Australia, Canada, New Zealand and Newfoundland. This seam in the Scottish Unionist Party's belief system was demonstrated when members of the party left to establish the Scottish Party, which eventually merged with the National Party of Scotland to form the Scottish National Party. It also explains what may at first seem a paradoxical statement by John Buchan, who as a Scottish Unionist MP stated, "I believe every Scotsman should be a Scottish nationalist." [2]

While the Scottish party may have been linked on a Parliamentary level with the Conservative and Unionist Party in England and Wales, it was conscious that it had to appeal to the liberal tradition in Scotland and studiously avoided using the term "Conservative".[1]

The party built up significant working-class support by emphasising the connection between Union, the Empire, and the fate of local industry. Unity across the classes was often cited as one of the party's planks of Unionism. Along with this protectionism, Protestantism also played an important part in the party's working-class appeal. Although not explicitly articulated by the party, lest it alienate what small but wealthy middle and upper class Catholic support it had, this appeal was projected through the endorsement and promotion of well known Church of Scotland members like John Buchan, or prominent Orangemen in areas of west and central Scotland where the Orange Lodge had strong support. Prominent Orangemen included Sir John Gilmour, the intermittent Secretary for Scotland in the 1920s and Home Secretary in the 1930s. Some saw this as an anti-Catholic appointment; however, it was Gilmour who, as the Secretary for Scotland, repudiated the Church of Scotland's highly controversial report entitled "The Menace of the Irish Race to our Scottish Nationality".

Being an independent Scottish party also drew electoral appeal when set against the threat of a London-based centralising British Labour party. A crucial aspect to this, particularly in the 1940s and 1950s, was the ability to place an 'alien' identity upon Labour by successfully using the term 'Socialist' to describe the Labour Party.[1] This distinctively Scottish appeal was further strengthened when combined with opposition to the Labour party's post-war nationalisation programme, which centralised control (in London) of former Scottish owned businesses and council-run services. The strong Scottish character of the party was even evident in relations with Conservative government ministers, when, for example, Lord Glendevon admitted he would be at odds with Scotland's Unionist Party for refusing the post of Secretary of State for Scotland because he preferred to remain at Westminster.[3]

The party's campaigning reflected their desire to reconcile the two themes of individualism and collectivism in their appeal to potential Labour voters. This projected an image of flexibility and pragmatism when they expressed their support for the synthesis of "two fundamental ideas of human individuality and of service to others and to the community."[1]

Electoral record and the 1955 election 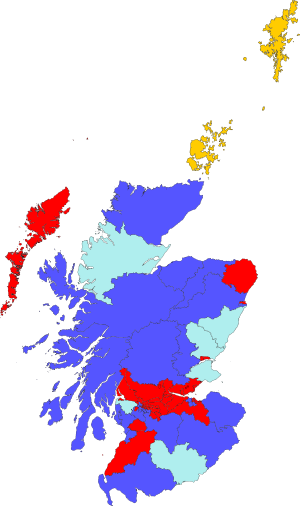 Map of the results of the 1955 election in Scotland; often cited as a high point for the Unionist Party.

With the Liberal Party divided and declining, the Scottish Unionist Party managed to attract former Liberal voters during this period — sometimes with candidates standing on a Liberal Unionist ticket. The creation of the National Liberals also assisted the Unionist vote.

Within this context their support grew, and the emergence of the Labour Party as a threat to the middle-classes resulted in the Scottish Unionists achieving a majority of Scottish seats in the 1924 election, 37 out of Scotland's 73. Suffering a setback in 1929, they reasserted themselves in the 1931 election during an electoral backlash against the Labour Party that resulted in the creation of the National Government. The Scottish Unionist Party won 79% of the Scottish seats that year: 58 out of 73. The following election of 1935 returned a reduced majority of 45 MPs.

This remained the situation until Labour's landslide victory in the 1945 election. The Unionists won only 30 of the (now) 71 constituencies. In the 1950 election, a majority of Labour MPs was returned again, but the Scottish Unionist Party closed the gap by returning 32 MPs. In the subsequent Conservative election victory of 1951, an equal number of Labour and Unionist MPs were returned from Scotland, 35, with one solitary Liberal taking the remaining seat.

With Church of Scotland membership peaking at 1.3 million in 1955 - or over quarter of Scotland's population [4] - the 1955 election brought unparalleled success as the party gained 50.1% of the vote and 36 of the 71 seats at Westminster. Often cited as the only party to achieve a majority of the Scottish vote, 6 of the Conservative and Unionist MPs were returned that year under the label of 'Liberal Unionist' or 'National Liberal'. This apparent success was the prelude to a number of events that weakened the appeal of both the Scottish Unionist Party and the Scottish Conservative branch that followed.

Only a year after the 1955 triumph, one event signalled the unravelling of the thread that had until then united Scottish Unionist support: the humiliation of the 1956 Suez Crisis. The event was a symbolic end for the British Empire; not only was British power seen to be eclipsed by the United States, but the unity of the Empire itself came into question. It was at this time that Canada's Lester Pearson led the United Nations' calls for a negotiated settlement and even offered Canadian troops as neutral peacekeepers to replace British soldiers.

In 1960 Conservative Prime Minister Harold Macmillan made his "Wind of Change" speech to the South African Parliament. This signalled an end to the colonial administration of British Empire overseas possessions and began their emergence as independent states. The change in Conservative attitudes to the cohesion of the British Empire had been illustrated earlier in 1958 with the expulsion of the League of Empire Loyalists from the Conservative Party Conference.

Psychologically these events marked the end of the British Empire, and with it the central thread of popular imperial unity which had bolstered the Scottish Unionist Party until then. In the 1959 election that saw the Unionists' sister Conservative party increase their overall majority in the Commons, the Scottish Unionists' own vote declined, and four MPs lost their seats. In the Conservative defeat of 1964 eight more Unionist MPs were lost.

Merger with the Conservative Party

With electoral defeat, reforms in 1965 brought an end to the Scottish Unionist Party as an independent force. It was renamed 'Scottish Conservative and Unionist Party' that constitutionally then came under the control of the British party. These, and further reforms in 1977, saw the Scottish Conservatives transformed into a regional unit, with its personnel, finance, and political offices under the control of the leadership in London.

These changes had serious implications for the Conservatives' Scottish identity. Set alongside the end of Empire (and the emergence of several independent states) it witnessed the rise of the Scottish National Party (SNP) as sections of the old Unionist and Labour nationalist vote swung to the SNP. This seemingly paradoxical swing from Unionist to SNP can be explained for three reasons: the old Scottish Unionist Party's projection as an independent Scottish party opposing a British Labour Party; the new use of the name "Conservative" viewed as rather English; and the Unionist-Nationalist tradition of John Buchan and others who had founded the Scottish Party.

As the British Empire came to an end, so too did the primacy of Protestant associations, as secularism and ecumenism rose. The decline of strictly Protestant associations, and the loss of its Protestant working-class base, spelled the erosion of the Unionist vote. Though many Conservatives would still identify with the Kirk, most members of the established Church of Scotland did not identify themselves as Conservatives.

With the Daily Record newspaper switching from the Unionists to Labour, the Conservative Party in the 1960s was mercilessly portrayed as a party of the Anglicised aristocracy. Combined with the new name, this helped switch previous Unionist voters to the Labour party and the SNP, which advanced considerably in the elections of February and October 1974.

The relations between the Scottish Conservatives with the largely working-class Orange Order also became problematic because of the perceived aristocratic connection of the former, but it was The Troubles in Northern Ireland that created more concrete problems. On one level, there was the residual perception of a connection that many mainstream Protestant voters associated with the sectarian violence in Northern Ireland — a perception that is unfair to a large extent since the Scottish Orange Order has dealt more stringently with members associating with Northern Irish paramilitaries than its Irish equivalent. However, the ramifications of this perception also led to the Scottish Conservative Party downplaying and ignoring past associations, which further widened the gap with the Orange Order. Any links that lingered were ultimately broken when Margaret Thatcher signed the Anglo-Irish Agreement. This event witnessed the Orange Lodge (amongst other supporters) setting up its own Scottish Unionist Party.

This chart shows the electoral results of the Scottish Unionist Party, from its first election in 1918, to its last in 1964. Total number of seats, and vote percentage, is for Scotland only.