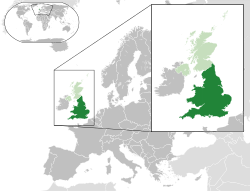 England and Wales (Welsh: Cymru a Lloegr) is a jurisdiction covering England and Wales, two of the four countries of the United Kingdom, which form the constitutional successor to the former Kingdom of England and follow a single legal system, known as English law.

The devolved National Assembly for Wales (Welsh: Cynulliad Cenedlaethol Cymru) was created in 1999 by the Parliament of the United Kingdom under the Government of Wales Act 1998 and provides a degree of self-government in Wales. The powers of the Assembly were expanded by the Government of Wales Act 2006, which allows it to pass its own laws, and the Act also formally separated the Welsh Government from the Assembly. There is no equivalent body for England, which is directly governed by the Parliament and the government of the United Kingdom. 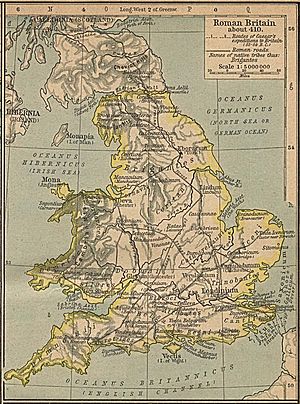 The Roman province of Britannia in 410

During the Roman occupation of Britain, the area of present-day England and Wales was administered as a single unit, with the exception of the land to the north of Hadrian's Wall. At that time, all the native inhabitants of Roman Britain spoke Brythonic languages, and were all regarded as Britons, divided into numerous tribes. After the conquest, the Romans administered this region as a single unit, the province of Britain.

After the departure of the Romans, the Britons of what became Wales developed their own system of law, first codified by Hywel Dda (Hywel the Good; reigned 942–950) when he was king of most of present-day Wales, while in England Anglo-Saxon law was initially codified by Alfred the Great in his Legal Code, c. 893. However, following the Norman invasion of Wales in the 11th century, English law came to be practised in the parts of Wales conquered by the Normans (the Welsh Marches). In 1283 the English, led by Prince Edward, with the biggest army brought together in England since the 11th century, conquered the remainder of Wales, then organised as the Principality of Wales, which was united with the English crown by the Statute of Rhuddlan of 1284. This aimed to replace Welsh criminal law with English law.

Welsh law continued to be used for civil cases until the annexation of Wales to England in the 16th century. The Laws in Wales Acts 1535–1542 then consolidated the administration of all the Welsh territories and incorporated them fully into the legal system of the Kingdom of England.[1]

England and Wales are treated as a single unit, for most purposes, because the two form the constitutional successor to the former Kingdom of England. The continuance of Scots law was guaranteed under the 1706 Treaty of Union that led to the Acts of Union 1707, and as a consequence English law—and after 1801, Irish law— continued to be separate. Following the two Acts of Union, Parliament can restrict the effect of its laws to part of the realm, and generally the effect of laws, where restricted, was originally applied to one or more of the former kingdoms. Thus, most laws applicable to England also applied to Wales. However, Parliament now passes laws applicable to Wales and not to England (and vice versa), a practice which was rare before the middle of the 20th century. Examples are the Welsh Language Acts 1967 and 1993 and the Government of Wales Act 1998. Measures and Acts of the National Assembly for Wales passed since the Government of Wales Act 2006 also apply in Wales but not in England.

Following the Government of Wales Act, effective since May 2007, the National Assembly for Wales can legislate on matters devolved to it. Following a referendum on 3 March 2011, the Welsh Assembly gained direct law-making powers, without the need to consult Westminster. This was the first time in almost 500 years that Wales had its own powers to legislate. Each piece of Welsh legislation is known as an Act of the Assembly. 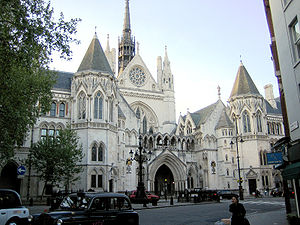 The Royal Courts of Justice of England and Wales

For a company to be incorporated in the United Kingdom, its application for registration with Companies House must state "whether the company's registered office is to be situated in England and Wales (or in Wales), in Scotland or in Northern Ireland",[2] which will determine the law applicable to that business entity. A registered office may be specified as "in Wales" if the company wishes to use a name ending cyfyngedig or cyf, rather than Limited or Ltd. and/or to avail itself of certain other privileges relating to the official use of the Welsh language.

Outside of the legal system the position is mixed. Some organisations combine as "England and Wales", others are separate.

The order of precedence in England and Wales is distinct from those of Northern Ireland and Scotland, and from Commonwealth realms.

The national parks of England and Wales have a distinctive legislative framework and history.