The United Kingdom general election of 1979 was held on 3 May 1979 to elect 635 members to the British House of Commons. The Conservative Party, led by Margaret Thatcher ousted the incumbent Labour government of James Callaghan with a parliamentary majority of 44 seats. The election was the first of four consecutive election victories for the Conservative Party, and Thatcher became the United Kingdom's and Europe's first female head of government.

The previous parliamentary term had begun in October 1974, when Harold Wilson led Labour to a majority of three seats, but within 18 months he had resigned as prime minister to be succeeded by James Callaghan, and within a year the government's narrow parliamentary majority had gone. Callaghan had made agreements with the Liberals, the Ulster Unionists, as well as the Scottish and Welsh nationalists in order to remain in power. However, on 28 March 1979 following the defeat of the Scottish devolution referendum, Thatcher tabled a motion of no confidence in James Callaghan's Labour government, which was passed by just one vote (311 to 310), triggering a general election five months before the end of the government's term.

The Labour campaign was hampered by the series of industrial disputes and strikes during the Winter of 1978-79, known as the Winter of Discontent and the party focused its campaign on support for the National Health Service and full employment. After intense media speculation, Callaghan had announced early in the autumn of 1978 that a general election would not take place that year having received private polling data which suggested a parliamentary majority was unlikely.[1]

The Conservative campaign employed the advertising agency Saatchi & Saatchi and pledged to control inflation as well as curbing the power of the trade unions. The Liberal Party was damaged by allegations that its former leader Jeremy Thorpe had been involved in a homosexual affair, and had conspired to murder his former lover.

The Liberals were now being led by David Steel, meaning that all three major parties entered the election with a new leader.

The election saw a 5.2% swing from Labour to the Conservatives, the largest swing since the 1945 election, which Clement Attlee won for Labour. Margaret Thatcher became Prime Minister, and Callaghan was replaced as Labour leader by Michael Foot in 1980. Results for the election were broadcast live on the BBC, and presented by David Dimbleby, Robert McKenzie, David Butler and Robin Day.[2] It was the first general election to feature Rick Wakeman's song Arthur on the BBC's coverage.

After suffering a vote of no confidence on 28 March 1979, the Prime Minister James Callaghan was forced to announce that he would request a dissolution of Parliament to onset a general election. The key dates were as follows:

Britain's economy during the 1970s was so weak that Labour minister James Callaghan warned his fellow Cabinet members in 1974 of the possibility of "a breakdown of democracy", telling them, "If I were a young man, I would emigrate."[3] Callaghan succeeded Harold Wilson as Labour Prime Minister after the latter's surprise resignation in April 1976. By March 1977 Labour had become a minority government after several by-election defeats, and from March 1977 to August 1978 Callaghan governed by an agreement with the Liberal Party through the Lib-Lab pact. Callaghan had considered calling an election in the autumn of 1978,[4] but ultimately decided that imminent tax cuts, and a possible economic upturn in 1979, could favour his party at the polls by holding the election later. Although published opinion polls suggested that he might win,[5] private polls commissioned by the Labour Party from MORI had suggested the two main parties had much the same level of support.[1]

However, events would soon overtake the Labour government. A series of industrial disputes in the winter of 1978–79, dubbed the "Winter of Discontent", led to widespread strikes across the country and seriously hurt Labour's standings in the polls. When the Scottish National Party (SNP) withdrew support for the Scotland Act 1978, a vote of no confidence was held and passed by one vote on 28 March 1979, forcing Callaghan to call a general election. As the previous election had been held in October 1974, Labour could have held on until the autumn of 1979 if it had not been for the lost confidence vote.

David Steel had replaced Jeremy Thorpe as leader of the Liberal Party in 1976, after allegations of homosexuality and conspiracy to murder his former lover forced Thorpe to resign. The Thorpe affair led to a fall in the Liberal vote after what was thought to be a breakthrough in the February 1974 election.

This was the first election since 1959 to feature three new leaders for the main political parties. The three main parties all advocated cutting income tax. Labour and the Conservatives did not specify the exact thresholds of income tax they would implement but the Liberals did, claiming they would have income tax starting at 20% with a top rate of 50%.[6]

The Labour campaign reiterated their support for the National Health Service and full employment and focused on the damage they believed the Conservatives would do to the country. In an early campaign broadcast, Callaghan asked: "The question you will have to consider is whether we risk tearing everything up by the roots". Towards the end of Labour's campaign Callaghan claimed a Conservative government "would sit back and just allow firms to go bankrupt and jobs to be lost in the middle of a world recession" and that the Conservatives were "too big a gamble to take".[7]

The Labour Party manifesto "The Labour way is the better way", was issued on 6 April. Callaghan presented four priorities:

The Conservatives campaigned on economic issues, pledging to control inflation and to reduce the increasing power of the trade unions who supported the mass strikes. They also employed the advertising agency Saatchi & Saatchi who created the Labour Isn't Working poster for them. The Conservative campaign was focused on gaining support from traditional Labour voters who had never voted Conservative before, first-time voters and people who had voted Liberal in 1974.[8] Thatcher's advisers, Gordon Reece and Timothy Bell, co-ordinated their presentation with the editor of The Sun, Larry Lamb. The Sun printed a series of articles by disillusioned former Labour ministers (Reginald Prentice, Richard Marsh, Lord George-Brown, Alfred Robens and Lord Chalfont) detailing why they had switched their support to Thatcher. She explicitly asked Labour voters for their support when she launched her campaign in Cardiff, claiming that Labour was now extreme.[9]

In the end, the overall swing of 5.2% was the largest since 1945 and gave the Conservatives a workable majority of 43 for the country's first female Prime Minister. The Conservative victory in 1979 also marked a change in government which would continue for 18 years until the Labour victory in 1997. The SNP saw a massive collapse in support, losing nine of their 11 MPs. The Liberals had a disappointing election; their scandal-hit former leader Jeremy Thorpe lost his seat in North Devon to the Conservatives.

James Kilfedder had been previously elected as an Ulster Unionist MP, but left the party, defending and holding his seat as an Independent Ulster Unionist. He subsequently founded the Ulster Popular Unionist Party but did not use that label in this election. 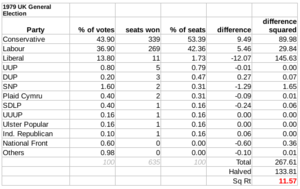 The disproportionality of the house of parliament in the 1979 election was 11.57 according to the Gallagher Index, mainly between the Conservatives and the Liberal Party.