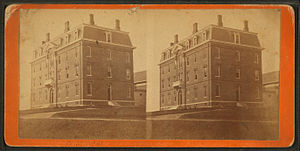 By 1871, curricula had been organized in Agriculture, Civil Engineering, Mechanical Engineering, and electives. The Maine Agricultural and Forest Experiment Station was founded as a division of the university in 1887. Gradually the university developed the Colleges of Life Sciences and Agriculture (later to include the School of Forest Resources and the School of Human Development), Engineering and Science, and Arts and Sciences. In 1912 the Maine Cooperative Extension, which offers field educational programs for both adults and youths, was initiated. The School of Education was established in 1930 and received college status in 1958. The School of Business Administration was formed in 1958 and was granted college status in 1965. Women have been admitted into all curricula since 1872. The first master's degree was conferred in 1881; the first doctor's degree in 1960. Since 1923 there has been a separate graduate school.[9] 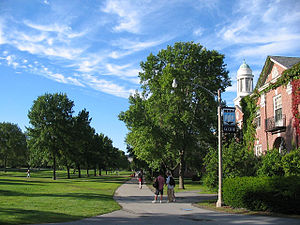 Near the end of the 19th century, the curriculum was expanded to place greater emphasis on liberal arts. As a function of this shift, new faculty hired during the early 20th century included Caroline Colvin, chair of the history department, and the first woman in the nation to head a major university department.[10]

In 1906, The Senior Skull Honor Society was founded to "publicly recognize, formally reward, and continually promote outstanding leadership and scholarship, and exemplary citizenship within the University of Maine community."[11]

On April 16, 1925, 80 women met in Balentine Hall — faculty, alumnae, and undergraduate representatives — to plan a pledging of members to a new honorary organization. This organization was called "The All Maine Women" because only those women closely connected with the University of Maine were elected as members. On April 22, 1925, the new members were inducted into the honor society.[12]

UMaine is also one of a handful of colleges in the United States whose Student Government is incorporated.[19] Student Government was formed in 1978 and incorporated in 1987. They are classified as a 501(c)(3) not for profit corporation.[20] It consists of a legislative branch, which passes resolutions, and an executive branch, which helps organize on-campus entertainment and guest speakers, works with new and existing student organizations, and performs other duties. Other organizations fall under the umbrella of Student Government Inc., including representative boards, community associations, and many other student groups. The Maine Campus, the student newspaper, is also incorporated and does not operate under or receive money from student government. 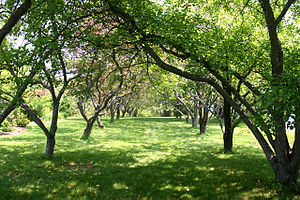 A tree-lined path through the Lyle E. Littlefield Ornamental Gardens

Situated on Marsh Island, between the Penobscot and Stillwater rivers, the University of Maine is the only Land Grant University in the nation located on an island.[21] Occupying the small city of Orono, population ~9,500,[22] the 660-acre (2.7 km2) campus[22] has a total enrollment (2012–2013) of 10,901 students.[23] The campus is equipped with thirty-seven academic buildings, thirty administrative buildings, eighteen residence halls, eighteen specific laboratory facilities, fourteen Greek life houses, ten sports facilities, five museums,[24] four dining facilities, two convenience stores, a student union, a cafe, a pub,[25] an 87,000-square-foot (8,100 m2) state of the art recreation and fitness center,[26] and a 200'x200' air supported athletic/recreational dome.[27]

The original campus plan was designed by landscape architect Frederick Law Olmsted, who also designed Central Park in New York City and the White House grounds in Washington, D.C.[28] Significant portions of Olmsted's plan, including the Front Lawn, were adopted during the school's first fifty years, and were oriented toward the Stillwater River. A second master plan was produced in 1932 by Carl Rust Parker of the Olmsted Brothers firm, in which the campus center was reoriented to the Mall, an open grassy area between the Raymond H. Fogler Library and the Memorial Gym.[29] The Mall is further bordered by one residence and five academic halls. The campus is essentially divided into three sections (northern, southern, and hilltop),[30] all of which are within close proximity to (or border directly on) the Mall. The northern section includes many of the athletic facilities, including the Alfond Arena(basketball, hockey), Morse Field at the Alfond Sports Stadium (football, track and field), Larry Mahaney Diamond (baseball), Kessock Field (softball), the Field Hockey Complex (field hockey), and the Mahaney athletic/recreational dome. Other buildings that occupy the northern section of campus include the Cutler Health Center, two administrative halls, three residence halls, and multiple academic halls. The southern section of campus includes the Memorial Student Union, the Maynard F. Jordan Observatory, Lengyel Gymnasium and Athletic Field, the Buchanan Alumni House, as well as multiple administrative, residence, and academic halls. The recently renovated Collins Center for the Arts is also located on the southern part of campus, and not only provides the Hutchins Concert Hall, a 1,435-seat venue for performing artists from around the world,[31] but also houses the Hudson Museum, known for its contemporary Native American art, as well as displays that are culturally specific to the indigenous people of Maine. The Hilltop section of campus is populated largely with residence halls but also includes the 7-acre (2.8 ha) Lyle E. Littlefield Ornamental Gardens,[32] as well as academic and recreational facilities. The campus is also designated as an arboretum.[33]

The pre-1915 core of the campus, covering its earliest period of development, was listed as a historic district on the National Register of Historic Places in 1978; this was expanded to include the second major phase of development (through the end of World War II) in 2010.[29]

University of Maine is one of 16 colleges and universities listed in Princeton Review's "Green Honor Roll" (2011). Several of the nation's leading research universities, including Virginia Tech, Georgia Tech, Oregon State, Arizona State and the University of Washington are also on that prestigious list, as are Harvard and Northeastern. Recognizing schools for their commitment to sustainability, the Green Honor Roll lists only those 16 institutions that received the highest possible score on The Princeton Review green rating. The guide lauds UMaine for its recycling programs, green-certified buildings and free shuttle bus service. It also notes the fact that UMaine has a sustainability coordinator, a sustainability council, and "Eco Reps" in its residence halls.[35]

The University of Maine has a sustainability council composed of students, faculty, administrators, and staff, and employs a full-time sustainability coordinator. A green loan fund provides capital for energy efficiency and renewable energy investments.[36] The university has committed to achieving carbon neutrality by 2040, and two residential-scale solar thermal systems are in place on Nutting Hall and Sebec House. The University of Maine composts food scraps from dining facilities, and York Dining Hall has gone trayless to reduce waste. For all new campus construction, LEED Silver standards are required.[37] The Blue Bike program refurbishes abandoned bikes and rents them to students free of charge, providing a means of alternative transportation on and around-campus.[38] 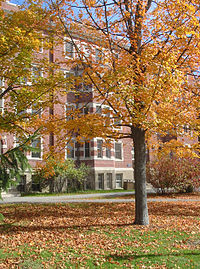 It is the only institution in Maine ranked as a national university in the U.S. News and World Report annual rankings. U.S. News categorizes UMaine as an institution that offers "a full range of undergraduate majors, master's, and doctoral degrees."[48]

UMaine is one of only four institutions in Maine (along with Bowdoin, Bates, and Colby) accredited to award membership into the Phi Beta Kappa honor society.[49]

The university is also the birthplace of the Phi Kappa Phi honor society, recognizing high academic achievement across all disciplines.[50]

The Raymond H. Fogler Library is the largest in Maine[51] and serves as one of its intellectual hubs, attracting scholars, professors, and researchers from around the state.[52] A collection of rare and ancient manuscripts, as well as about two million government publications, augment the University's collection.[53] The Special Collections Unit includes the Stephen King (author and UMaine alumnus) papers, which attract researchers from across the globe.

UMaine hosts the Intensive English Institute, an English as a second language program designed to help students develop their English language skills for success in school, business, and social communication.[54]

With 211 faculty and 2,742 students (fall 2011), the College of Liberal Arts and Sciences offers Maine's most comprehensive liberal arts experience. 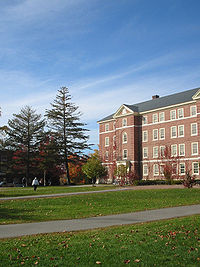 The University of Maine received the following classifications from The Carnegie Foundation:[59]

The University of Maine is one of the National Science Foundation's top 100 public universities for research. In FY10, UMaine exceeded $100 million in external expenditures for research — 86% of which was federal funding. Leading sectors of the university in generating external support are advanced materials, marine sciences, climate change, environmental studies, forestry, precision manufacturing, and aquaculture. Undergraduate research is a priority at UMaine, and in 2008, the Center for Undergraduate Research was established to connect students with faculty projects that suit their interests.

The University of Maine participates in the NCAA's Division I level,[65] and is a member of the Colonial Athletic Association for football,[66] Hockey East for ice hockey,[67] and the America East Conference for all other sports.[68] The school has won two national championships, both in men's ice hockey. In 1993, they defeated Lake Superior State University 5-4 behind a third period hat trick by Jim Montgomery. In 1999, they defeated rival University of New Hampshire 3-2 in overtime on a goal by Marcus Gustafsson.[69]

In 1965, the football team competed in the Tangerine Bowl in Orlando, Florida against East Carolina. They were beaten in the game 31-0,[70] but remain the only team from Maine to compete in a bowl contest.

The baseball team has participated in seven College World Series, six of them under coach John Winkin between 1976 and 1986, and one under Jack Butterfield in 1964. The Black Bears achieved two third-place finishes in 1964 and 1982.

Although the official fight song of UMaine is "For Maine", the school song is the more-known, "Stein Song". Written by Lincoln Colcord (words) and E. A. Fenstad (music), the tune rose to fame when Rudy Vallée arranged the current version. Vallee attended Maine from 1921–1922 before transferring to Yale, and his popularity helped make the song a national favorite. To this day, the "Stein Song" remains the only college fight song to ever reach number one on the pop charts, achieving this distinction in 1930.[71] According to College Fight Songs: An Annotated Anthology, by Studwell and Schueneman, the "Stein Song" is one of the very best fight songs of all time.[72]

In addition to varsity athletics, the university offers many club sports through its Campus Recreation department. Sport clubs represent UMaine by competing against teams and clubs from other universities and colleges. National governing bodies for each club provide competition guidelines and league structure.

Sport clubs are student-led and student-administered. Each has a budget that is run through Campus Recreation, which in part funds nearly all clubs. Clubs are eligible for funding through Campus Recreation after they have been active for at least one year and have a membership minimum of ten members. Current club sports include alpine skiing, baseball, crew, cricket, cycling, fast pitch softball, field hockey, golf, ice hockey, lacrosse, nordic skiing, roller hockey, rugby, shotokan karate, soccer, tennis, table tennis, tackle football, ultimate, and volleyball.[73] 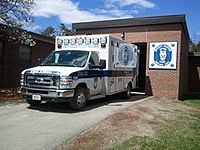 One of the University of Maine's ambulances.

The University of Maine operates the "University Volunteer Ambulance Corps," an Ambulance service licensed by the State of Maine. The service is operated by students and staff of the University. UVAC's ambulances are available to respond to emergencies on campus and also provide mutual aid to surrounding towns and agencies. The service ensures a licensed Emergency Medical Technician is sent on every call. The service has two ambulances both equipped to provide Paramedic Level care. UVAC responds to approximately 500 calls per school year.[78]