From Infogalactic: the planetary knowledge core
Jump to: navigation, search
For other uses, see Utrecht (disambiguation). 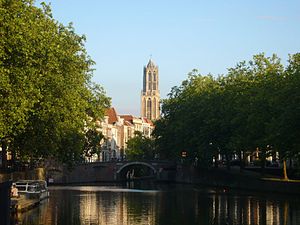 Dom Tower in the city of Utrecht. 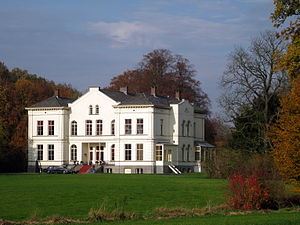 In the International Organization for Standardization world region code system Utrecht makes up one region with code ISO 3166-2:NL-UT.

The Bishopric of Utrecht was established in 695 when Saint Willibrord was consecrated bishop of the Frisians at Rome by Pope Sergius I. With the consent of the Frankish ruler, Pippin of Herstal, he settled in an old Roman fort in Utrecht. After Willibrord's death the diocese suffered greatly from the incursions of the Vikings. Better times appeared during the reign of the Saxon emperors, who frequently summoned the Bishops of Utrecht to attend the imperial councils and diets. In 1024 the bishops were made Princes of the Holy Roman Empire and the new Prince-Bishopric of Utrecht was formed. In 1122, with the Concordat of Worms, the Emperor's right of investiture was annulled, and the cathedral chapter received the right to elect the bishop. It was, however, soon obligated to share this right with the four other collegiate chapters in the city. The Counts of Holland and Guelders, between whose territories the lands of the Bishops of Utrecht lay, also sought to acquire influence over the filling of the episcopal see. This often led to disputes and consequently the Holy See frequently interfered in the election. After the middle of the 14th century the popes repeatedly appointed the bishop directly without regard to the five chapters.

In 1527, the Bishop sold his territories, and thus his secular authority, to Holy Roman Emperor Charles V and the principality became an integral part of the Habsburg dominions, which already included most other Dutch provinces. The chapters transferred their right of electing the bishop to Charles V and his government, a measure to which Pope Clement VII gave his consent, under political pressure after the Sack of Rome. However, the Habsburg rule did not last long, as Utrecht joined in the Dutch Revolt against Charles' successor Philip II in 1579, becoming a part of the Dutch Republic.

In World War II, Utrecht was held by German forces until the general capitulation of the Germans in the Netherlands on May 5, 1945. It was occupied by Canadian Allied forces on May 7, 1945. The towns of Oudewater, Woerden and Vianen were transferred from the province of South Holland to Utrecht in 1970, 1989 and 2002 respectively. In February 2011, Utrecht, together with the provinces of North Holland and Flevoland, showed a desire to investigate the feasibility of a merger between the three provinces.[1] This has been positively received by the Dutch cabinet, for the desire to create one Randstad province has already been mentioned in the coalition agreement.[2] The province of South Holland, part of the Randstad urban area, visioned to be part of the Randstad province,[3] and very much supportive of the idea of a merger into one province,[4] is not named. With or without South Holland, if created, the new province would be the largest in the Netherlands in both area and population. 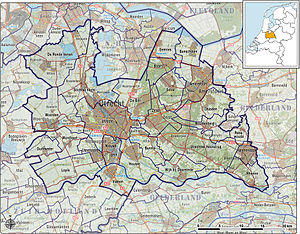 In the east of Utrecht lies the Utrecht Hill Ridge (Dutch: Utrechtse Heuvelrug), a chain of hills left as lateral moraine by tongues of glacial ice after the Saline glaciation that preceded the last ice age. Because of the scarcity of nutrients in the fast-draining sandy soil, the greatest part of a landscape that was formerly heath has been planted with pine plantations. The south of the province is a river landscape. The west consists mostly of meadows. In the north are big lakes formed by the digging of peat from bogs formed after the last ice age. 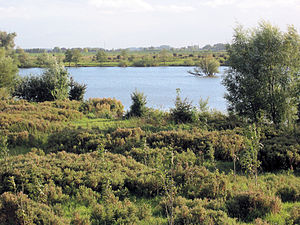 A site in Utrecht's nature reserve, "Blauwe kamer" near Rhenen

One of the most attractive natural areas in the province is the Vechtstreek ("Vecht region"), situated on either side of the Vecht river.

An international nature conservation organisation that has settled the head office of its Netherlands branch in this province (at Zeist) is the WWF.

"Natuur en Milieu" ("Nature and Environment")[5] is a national nature protection organisation whose head office is in this province (at Utrecht city).

The Province of Utrecht is divided into 26 municipalities.