From Infogalactic: the planetary knowledge core
Jump to: navigation, search
This article is about the Dutch province. For other uses, see North Holland (disambiguation). 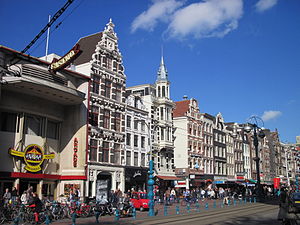 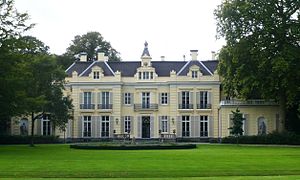 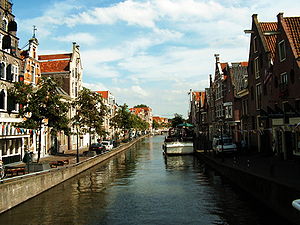 From the 9th to the 16th century, the area was an integral part of the County of Holland. During this period West Friesland was incorporated. In the 17th and 18th century, the area was part of the province of Holland. At that time, the distinction between the Noorderkwartier (Northern Quarter) and the Zuiderkwartier (Southern Quarter) became common. In 1840, the province of Holland was split into the two provinces of North Holland and South Holland. In 1855, the Haarlemmermeer was drained and turned into land.

The capital and seat of the provincial government is Haarlem, and Amsterdam, the Netherlands' capital city is the province's largest city. The King's Commissioner of North Holland is Johan Remkes. There are 51 municipalities and three (parts of) water boards in the province.

For most of its history, the modern-day province of North Holland was an integral part of Holland.

From the 9th century to the 16th century, Holland was a county ruled by the counts of Holland. During this period an area known as West Friesland (now part of North Holland) was conquered and integrated into Holland. For centuries afterwards Holland would be officially called "Holland and West Friesland". The people of West Friesland had (and still have) a strong sense of identity as a region within Holland (and later North Holland).

From the 16th century to 1795, Holland was the wealthiest and most important province in the United Provinces in the Dutch Republic. As the richest and most powerful province, Holland dominated the union. During this period a distinction was sometimes made between the "North Quarter" (Noorderkwartier) and the "South Quarter" (Zuiderkwartier), areas that roughly correspond to the two modern provinces.

The province of North Holland as it is today has its origins in the period of French rule from 1795 to 1813. This was a time of bewildering changes to the Dutch system of provinces. In 1795 the old order was swept away and the Batavian Republic was established. In the Constitution enacted on 23 April 1798, the old borders were radically changed. The republic was reorganised into eight departments (département) with roughly equal populations. Holland was split up into five departments named "Texel", "Amstel", "Delf", "fr (Schelde en Maas)", and "Rijn". The first three of these lay within the borders of the old Holland; the latter two were made up of parts of different provinces. In 1801 the old borders were restored when the department of Holland was created. This reorganisation had been short-lived, but it gave birth to the concept of breaking up Holland and making it a less powerful province.

In 1807, Holland was reorganised. This time the two departments were called "Amstelland" (corresponding to the modern province of North Holland) and "Maasland" (corresponding to the modern province of South Holland). This also did not last long. In 1810, all the Dutch provinces were integrated into the French Empire. Amstelland and Utrecht were amalgamated as the department of "Zuiderzee" (Zuyderzée in French) and Maasland was renamed "Monden van de Maas" (Bouches-de-la-Meuse in French).

After the defeat of the French in 1813, this organisation remained unchanged for a year or so. When the 1814 Constitution was introduced, the country was reorganised as provinces and regions (landschappen). Zuiderzee and Monden van de Maas were reunited as the province of "Holland". One of the ministers on the constitutional committee (van Maanen) suggested that the old name "Holland and West Friesland" be reintroduced to respect the feelings of the people of that region. This proposal was rejected.

However, the division was not totally reversed. When the province of Holland was re-established in 1814, it was given two governors, one for the former department of Amstelland (i.e. the area that is now North Holland) and one for the former department of Maasland (i.e. now South Holland). Even though the province had been reunited, the two areas were still being treated differently in some ways and the idea of dividing Holland remained alive. (During this reorganisation the islands of Vlieland and Terschelling were returned to Holland and parts of "Hollands Brabant" (including "Land of Altena") went to North Brabant. The borders with Utrecht and Gelderland were definitively set in 1820.)

When the constitutional amendments were introduced in 1840, it was decided to split Holland once again, this time into two provinces called "North Holland" and "South Holland". The need for this was not felt in South Holland or in West Friesland (which feared the dominance of Amsterdam). The impetus came largely from Amsterdam, which still resented the 1838 relocation of the court of appeal to The Hague in South Holland.

After the Haarlemmermeer was drained in 1855 and turned into arable land, it was made part of North Holland. In exchange, South Holland received the greater part of the municipality of Leimuiden in 1864.

In 1942, the islands Vlieland and Terschelling went back to the province of Friesland.

In 1950, the former island Urk was ceded to the province of Overijssel.

In February 2011, North Holland, together with the provinces of Utrecht and Flevoland, showed a desire to investigate the feasibility of a merger between the three provinces.[3] This has been positively received by the Dutch cabinet, for the desire to create one Randstad province has already been mentioned in the coalition agreement.[4] The province of South Holland, part of the Randstad urban area, visioned to be part of the Randstad province,[5] and very much supportive of the idea of a merger into one province,[6] is not named. With or without South Holland, if created, the new province would be the largest in the Netherlands in both area and population. 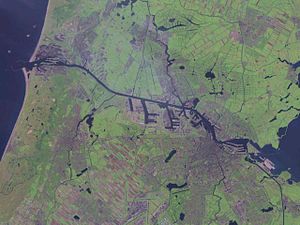 Satellite image of the south of North Holland

North Holland is a broad peninsula for the most part, located between the North Sea, the Wadden Sea, the IJsselmeer, and the Markermeer. More than half of the province consists of reclaimed polder land situated below sea level. The West Frisian islands of Noorderhaaks and Texel are also part of the province.

North Holland makes up a single region of the International Organization for Standardization world region code system, having the code ISO 3166-2:NL-NH.

As of January 2016, North Holland is divided into 48 municipalities (local government). After the dissolution of the Netherlands Antilles, three islands in the Caribbean, Bonaire, Saba, and Sint Eustatius, were offered to join the province, though the offer has been neither accepted nor rejected.[citation needed]

North Holland has five municipalities with 100,000 or more inhabitants. They are, in order of size, Amsterdam (in terms of population this is also the largest municipality in the Netherlands), Haarlem, Zaanstad, Haarlemmermeer and Alkmaar. Another seven municipalities have a population between 50,000 and 100,000 inhabitants (i.e. Hilversum, Amstelveen, Purmerend, Hoorn, Velsen, Den Helder and Heerhugowaard.)

On 1 January 2015 the municipalities of Graft-De Rijp and Schermer were merged into the existing municipality of Alkmaar. 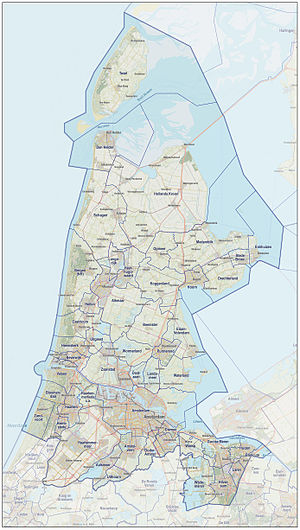 North Holland has various regions that, for historical or other reasons, have their own identities. Some of these regions are unofficial, ill-defined and sometimes overlapping. Others are official and are part of regional groupings artificially created for various administrative purposes. These regions are not the same as the municipalities.

List of some of these unofficial and official regions in North Holland: 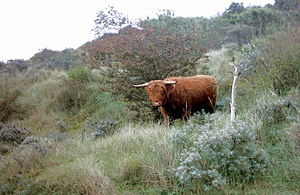 A Highland in Zuid-Kennemerland National Park

Some of the best known nature reserves in this province are:

More information about nature reserves in North Holland is available (in Dutch) on the relevant site pages of national nature conservation organisations Natuurmonumenten [7] and Staatsbosbeheer ,[8] as well as provincial organisation "Landschap Noord-Holland".[9]

Several international nature[citation needed] friendly organisations such as Greenpeace and Amnesty International have settled the headoffice of their Netherlands branche in this province and particularly in Amsterdam.

The international headquarters of Greenpeace is also located in Amsterdam.

Several national nature friendly organisations like Milieudefensie, the national "Union of vegetarians",[10] the "Vissenbescherming" (Fish protection foundation)[11] and the Party for the Animals as well have their headoffice in this province.