Vector notation,[1][2][3] commonly used mathematical notation for working with mathematical vectors,[4] which may be geometric vectors or abstract members of vector spaces.

For representing a vector,[5][6] the common typographic convention is upright boldface type, as in

for a vector named ‘v’. The International Organization for Standardization (ISO) recommends either bold italic serif, as in v or a, or non-bold italic serif accented by a horizontal right arrow, as in

.[7] This arrow notation for vectors is commonly used in handwriting, where boldface is impractical. The arrow represents right-pointing arrow notation or harpoons. Shorthand notations include tildes and straight lines placed above or below the name of a vector.

Between 1880 and 1887, Oliver Heaviside developed operational calculus,[8][9] a method of solving differential equations by transforming them into ordinary algebraic equations which caused much controversy when introduced because of the lack of rigour in its derivation.[10] After the turn of the 20th century, Josiah Willard Gibbs would in physical chemistry supply notation for the scalar product and vector products, which was introduced in Vector Analysis. 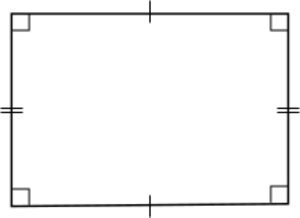 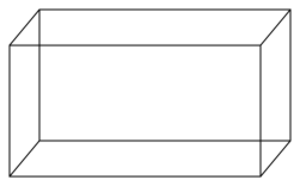 A rectangular vector is a coordinate vector specified by components that define a rectangle (or rectangular prism in three dimensions, and similar shapes in greater dimensions). The starting point and terminal point of the vector lie at opposite ends of the rectangle (or prism, etc.).

can be specified using an ordered set of components, enclosed in either parentheses or angle brackets.

In a general sense, an n-dimensional vector v can be specified in either of the following forms:

can be specified in either of the following forms using matrices:

Where v1, v2, …, vn − 1, vn are the components of v. In some advanced contexts, a row and a column vector have different meaning; see covariance and contravariance of vectors.

(or fewer dimensions, such as

. The basis is represented with the unit vectors

A three-dimensional vector v can be specified in the following form, using unit vector notation:

Where vx, vy, and vz are the magnitudes of the components of v. 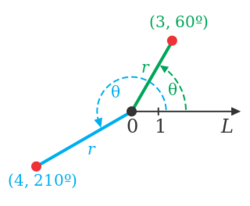 A polar vector is a vector in two dimensions specified as a magnitude (or length) and a direction (or angle). It is akin to an arrow in the polar coordinate system. The magnitude, typically represented as r, is the length from the starting point of the vector to its endpoint. The angle, typically represented as θ (the Greek letter theta), is measured as the offset from the horizontal (or a line collinear with the x-axis in the positive direction). The angle is typically reduced to lie within the range

A two-dimensional polar vector v can be represented as any of the following, using either ordered pair or matrix notation:

Where r is the magnitude, θ is the angle, and the angle symbol (

Polar vectors can also be specified using simplified autonomous equations that define r and θ explicitly. This can be unwieldy, but is useful for avoiding the confusion with two-dimensional rectangular vectors that arises from using ordered pair or matrix notation.

A two-dimensional vector whose magnitude is 5 units and whose direction is π/9 radians (20°) can be specified using either of the following forms: 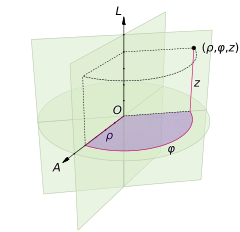 A cylindrical coordinate system with origin O, polar axis A, and longitudinal axis L. The dot is the point with radial distance ρ = 4, angular coordinate φ = 130°, and height z = 4.

A cylindrical vector is an extension of the concept of polar vectors into three dimensions. It is akin to an arrow in the cylindrical coordinate system. A cylindrical vector is specified by a distance in the xy-plane, an angle, and a distance from the xy-plane (a height). The first distance, usually represented as r or ρ (the Greek letter rho), is the magnitude of the projection of the vector onto the xy-plane. The angle, usually represented as θ or φ (the Greek letter phi), is measured as the offset from the line collinear with the x-axis in the positive direction; the angle is typically reduced to lie within the range

. The second distance, usually represented as h or z, is the distance from the xy-plane to the endpoint of the vector.

Cylindrical vectors are specified like polar vectors, where the second distance component is concatenated as a third component to form ordered triplets (again, a subset of ordered set notation) and matrices. The angle may be prefixed with the angle symbol (

A three-dimensional cylindrical vector v can be represented as any of the following, using either ordered triplet or matrix notation:

Where r is the magnitude of the projection of v onto the xy-plane, θ is the angle between the positive x-axis and v, and h is the height from the xy-plane to the endpoint of v. Again, the angle symbol (

A cylindrical vector can also be specified directly, using simplified autonomous equations that define r (or ρ), θ (or φ), and h (or z). Consistency should be used when choosing the names to use for the variables; ρ should not be mixed with θ and so on.

A three-dimensional vector, the magnitude of whose projection onto the xy-plane is 5 units, whose angle from the positive x-axis is π/9 radians (20°), and whose height from the xy-plane is 3 units can be specified in any of the following forms: 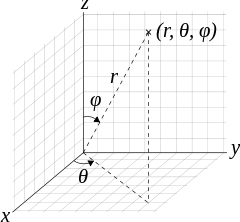 A spherical vector is another method for extending the concept of polar vectors into three dimensions. It is akin to an arrow in the spherical coordinate system. A spherical vector is specified by a magnitude, an azimuth angle, and a zenith angle. The magnitude is usually represented as ρ. The azimuth angle, usually represented as θ, is the offset from the line collinear with the x-axis in the positive direction. The zenith angle, usually represented as φ, is the offset from the line collinear with the z-axis in the positive direction. Both angles are typically reduced to lie within the range from zero (inclusive) to 2π (exclusive).

Spherical vectors are specified like polar vectors, where the zenith angle is concatenated as a third component to form ordered triplets and matrices. The azimuth and zenith angles may be both prefixed with the angle symbol (

); the prefix should be used consistently to produce the distance-angle-angle combination that distinguishes spherical vectors from cylindrical ones.

A three-dimensional spherical vector v can be represented as any of the following, using either ordered triplet or matrix notation:

Where ρ is the magnitude, θ is the azimuth angle, and φ is the zenith angle.

Like polar and cylindrical vectors, spherical vectors can be specified using simplified autonomous equations, in this case for ρ, θ, and φ.

A three-dimensional vector whose magnitude is 5 units, whose azimuth angle is π/9 radians (20°), and whose zenith angle is π/4 radians (45°) can be specified as:

, the inner product is known as the dot product. In

, an additional operation known as the cross product is also defined.

Scalar multiplication is represented in the same manners as algebraic multiplication. A scalar beside a vector (either or both of which may be in parentheses) implies scalar multiplication. The two common operators, a dot and a rotated cross, are also acceptable (although the rotated cross is almost never used), but they risk confusion with dot products and cross products, which operate on two vectors. The product of a scalar c with a vector v can be represented in any of the following fashions:

Using the algebraic properties of subtraction and division, along with scalar multiplication, it is also possible to “subtract” two vectors and “divide” a vector by a scalar.

Scalar division is performed by multiplying the vector operand with the numeric inverse of the scalar operand. This can be represented by the use of the fraction bar or division signs as operators. The quotient of a vector v and a scalar c can be represented in any of the following forms:

The norm is also sometimes represented with single bars, like

, but this can be confused with absolute value (which is a type of norm).

The cross product of two vectors (in

) is represented using the rotated cross as an operator. The cross product of two vectors u and v would be represented as:

In some older literature, the following notation is used for the cross product between u and v: