From Infogalactic: the planetary knowledge core
Jump to: navigation, search
For other uses, see Vire (disambiguation).

Vire (French: [viʁ]) is a commune in the Calvados department in the Basse-Normandie region in northwestern France.

The town is located on the river Vire.

In 1123, Henri I Beauclerc, King of England and Duke of Normandy, had a redoubt constructed on a rocky hill top, which was surrounded by the Vire river. The redoubt was stoned square at the bottom to assure the defense of the Duchy of Normandy against any attacks from Brittany or Maine.[1][dead link]

In the old community of Neuville, north of the territory, the castle of Tracy is the seat of an important manor, Arcisse de Caumont.[3]

At the end of the Middle Ages, the village prospered; first with leather, and then with textiles[4] During the hundred years war, Vire was plundered in 1368 by large military companies,[2] and delivered to the English in 1418. The English occupation would end in 1450 and would be brutal to the inhabitants. The execution of Hugues Vaux, owner of the largest farm of the village, after refusing to give up his farm to the English sergeant Fields, caused grief and concern amongst the population. Some inhabitants nevertheless benefited from the English occupation. Eugène Vergny, who provided Fields with information about the movement of the French troops, received the property of Vaux after his execution.[1]

During the reign of Louis XIII of France, because a number of Fortifications of the Middle Ages served in rebellions by the Huguenots in particular, the castle and its precinct were dismantled on orders of Richelieu.[2]:7 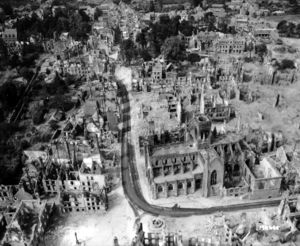 Aerial view after the bombardment in 1944

During the 19th century, the village did not respond well to the Industrial Revolution and went into an important recession.

On June 6, 1944 during the Second World War, around 8:00 pm, like many Norman cities and villages, Vire suffered heavily from the British bombings, and 95% of the town was destroyed. One of the two target marking flare groups was out of alignment and much of the bombing fell across the town of Vire. The Master Bomber in charge of the operation identified the problem and issued corrections to the incoming aircraft. Much of the bombing from the first wave of aircraft fell across the town of Vire killing many of the inhabitants. It was a distressing night for many families.[5]

The reconstruction after the second world war began in the 1960s. 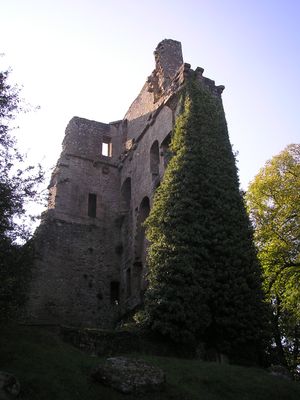 Ruins of the Redoubt