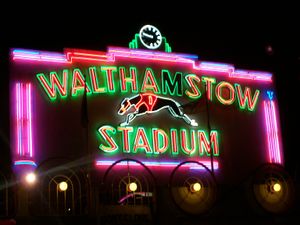 Walthamstow Stadium was a greyhound racing track located in the London Borough of Waltham Forest in east London (grid reference TQ375913) and was one of a limited number of remaining greyhound race tracks operating in Greater London.[1] The track closed in August 2008, despite assurances from the owners in December 2007 that no deal had been made to sell the track and that racing would continue for years. 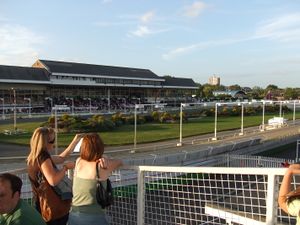 Inside Walthamstow Stadium in 2008

It was a greyhound racing stadium for the purposes of entertainment, usually including gambling on the outcome of a race. The stadium was opened in 1933 by William Chandler and run by the Chandler family until it closed in 2008. It had a larger attendance and income from gambling than any other dog racing track in the UK, with capacity for over 5,000 spectators. It had five race meetings a week, during the day on Monday and Friday, and at night on Tuesday, Thursday and Saturday. The first race started at 7:45 pm on Tuesday and Thursday, and at 7:30 pm on Saturday. The last race started at 10:30 pm on all three nights. Trials were held on Wednesdays and before racing. All meetings had 14 races except for the Friday meeting, which had 12. The most common races were over 475 and 640 metres, with occasional 430, 835 and 880 races for specialist greyhounds.

Motor cycle speedway racing was staged at the Walthamstow Greyhound Stadium in Chingford Road in 1934 and between 1949 and 1951. Between 1949 and 1951 the team, known as the Walthamstow Wolves, raced in the National League Second Division with moderate success. The team featured ex-England international George Newton. At that time all the other London clubs, Wembley, Wimbledon, West Ham, Harringay and New Cross raced in the First Division. The sport left the stadium in the 1950s owing to declining attendance and complaints of noise from local residents. The track itself can still be seen but has been covered in tarmac for easier maintenance of the dog track. 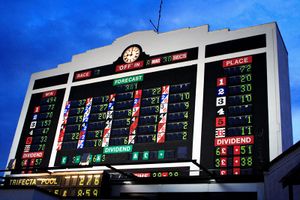 On 29 March 1968 the Spedeworth promotion took over the running of racing at Walthamstow with their Superstox, Stock Car, Hot Rod, Banger and Midget Racing. The promotion continued there until the end of the 1974 racing season.

In 1984 a nightclub called Charlie Chan's was opened within the foundations of the clocktower. It closed permanently in November 2007. It could be said that if a person from the East End of London refers to "going down the dogs", they were probably going to the dog track at Walthamstow or Romford Greyhound Stadium. There were once 33 greyhound tracks in London, but only Romford, Wimbledon and Crayford remain, after Catford closed in 2003. The directors of Walthamstow Stadium Limited have agreed to the sale of the Company’s freehold property at Walthamstow Stadium to a development consortium led by London and Quadrant. Formal contracts have been exchanged and completion is expected on or before 1 September 2008. The final race was held during Meeting 152 on Saturday 16 August 2008 at 23:00, the winner being No. 2 'Mountjoy Diamond'. Numerous attempts to buy or lease the stadium back from developers have been made but have so far been unsuccessful.[2] On 8 May 2012 the application for housing on the site was approved by four votes to three, the councillors who voted for the plans were Jenny Gray (Leytonstone ward, Labour), Asim Mahmood (Markhouse, Labour), Ebony Vincent (Markhouse, Labour) and committee chair Peter Barnett (Wood Street, Labour). Those who voted against were Ed Northover (Larkswood, Conservative), Alan Siggers (Valley, Conservative) and Liz Phillips (Cann Hall, Liberal Democrat).[3] On 30 October 2012 Mayor of London Boris Johnson approved the plans for housing.[4]