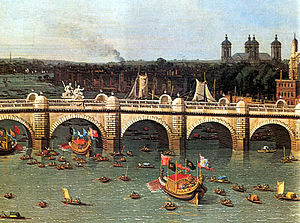 The Water Music is a collection of orchestral movements, often published as three suites, composed by George Frideric Handel. It premiered on 17 July 1717 after King George I had requested a concert on the River Thames.

The Water Music opens with a French overture and includes minuets, bourrées and hornpipes. It is divided into three suites:

There is evidence for the different arrangement found in Chrysander's Gesellschaft edition of Handel's works (in volume 47, published in 1886), where the movements from the "suites" in D and G were mingled and published as one work with HWV 348. This sequence derives from Samuel Arnold's first edition of the complete score in 1788 and the manuscript copies dating from Handel's lifetime. Chrysander's edition also contains an earlier version of the first two movements of HWV 349 in the key of F major composed in 1715 (originally scored for two natural horns, two oboes, bassoon, strings and continuo), where in addition to the horn fanfares and orchestral responses, the original version contained an elaborate concerto-like first violin part.[1]

The music in each of the suites has no set order today.

The first performance of the Water Music suites is recorded in the Daily Courant, a London newspaper. At about 8 p.m. on Wednesday, 17 July 1717, King George I and several aristocrats boarded a royal barge at Whitehall Palace for an excursion up the Thames toward Chelsea. The rising tide propelled the barge upstream without rowing. Another barge provided by the City of London contained about fifty musicians who performed Handel's music. Many other Londoners also took to the river to hear the concert. According to the Courant, "the whole River in a manner was covered" with boats and barges. On arriving at Chelsea, the king left his barge, then returned to it at about 11 p.m. for the return trip. The king was so pleased with the Water Music that he ordered it to be repeated at least three times, both on the trip upstream to Chelsea and on the return, until he landed again at Whitehall.[2]

King George's companions in the royal barge included Anne Vaughan, the Duchess of Bolton, the Duchess of Newcastle, the Duke of Kingston, the Countess of Darlington, the Countess of Godolphin, Madam Kilmarnock, and the Earl of Orkney. Handel's orchestra is believed to have performed from about 8 p.m. until well after midnight, with only one break while the king went ashore at Chelsea.[3]

It was rumoured that the reason for the spectacular performance of the Water Music was purposed to help King George steal some of the London spotlight back from the prince, who at the time was worried that his time to rule would be shortened due to his father's long life and was throwing lavish parties and dinners to compensate for it. In a long term, the Water Music's first performance on the water was the King's way of reminding London that he was still there and showing he could carry out gestures of even more grandeur than his son.[4]

Legend has it that Handel composed Water Music to regain the favour of King George I. Handel had been employed by the future king before George succeeded to the British throne while he was still Elector of Hanover. The composer supposedly fell out of favour for moving to London in the reign of Queen Anne. This story was first related by Handel's early biographer John Mainwaring; although it may have some foundation in fact, the tale as told by Mainwaring has been doubted by some Handel scholars.[lower-alpha 2]

Popular culture and the media

Many portions of Water Music have become familiar. Between 1959 and 1988, a Water Music movement was used for the ident of Anglia Television. The D major movement in 3/2 metre subtitled "Alla Hornpipe" is particularly notable and has been used frequently for television and radio commercials, including commercials for the privatisation of the UK water companies in the late 1980s. The "Air" and "Bourrée" from the F major suite have also become popular with audiences, with the latter being the theme music to the popular PBS cooking show The Frugal Gourmet.

From 1977 to 1996, Walt Disney World featured movements from both instalments of Water Music as the background music for the Electrical Water Pageant, a parade of sea creatures lit up with electric lights off the coast of the Magic Kingdom.[6]

Allegro in D was used in an inspirational scene from the 1989 movie Dead Poets Society, starring Robin Williams and Ethan Hawke.

It was also used in The Ren & Stimpy Show.

There are many recordings. The Music for the Royal Fireworks, composed more than thirty years later for another outdoor performance, has often been paired with the Water Music on recordings. Together, these works constitute Handel's most famous music for orchestra. Older recordings tended to use arrangements of Handel's score for the modern orchestra, for example, the arrangements by Hamilton Harty and Leopold Stokowski. More recent recordings tend to use authentic instruments and historically informed performance methods appropriate for baroque music.