From Infogalactic: the planetary knowledge core
Jump to: navigation, search
For other uses, see Widow (disambiguation).

A widow is a woman whose spouse has died, while a widower is a man in that situation. The state of having lost one's spouse to death is termed widowhood[citation needed]. These terms are not applied to a person after he or she becomes divorced from their former spouse, though they may sometimes be used after the former spouse has died[citation needed]. 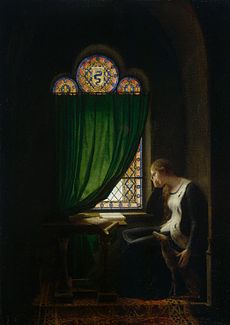 Valentine of Milan Mourning Her Husband, the Duke of Orléans, by Fleury-François Richard 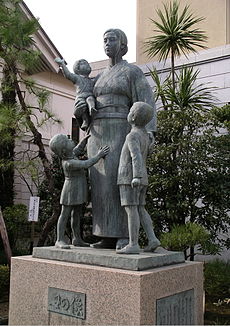 Statue of a mother at Yasukuni Shrine, dedicated to war widows who raised their children alone.

In societies where the husband is the sole provider, his death can leave his family destitute. The tendency for women generally to outlive men can compound this, since men in many societies marry women younger than themselves. In some patriarchal societies, widows may maintain economic independence. A woman would carry on her spouse's business and be accorded certain rights, such as entering guilds. More recently, widows of political figures have been among the first women elected to high office in many countries, such as Corazón Aquino or Isabel Martínez de Perón.

In 19th-century Britain, widows had greater opportunity for social mobility than in many other societies. Along with the ability to ascend socio-economically, widows—who were "presumably celibate"—were much more able (and likely) to challenge conventional sexual behaviour than married women in their society.[8]

In some parts of Europe, including Russia, Czechoslovakia, Greece, Italy and Spain, widows used to wear black for the rest of their lives to signify their mourning, a practice that has since died out. Many immigrants from these cultures to the United States as recently as the 1970s have loosened this strict standard of dress to only two years of black garments[citation needed]. However, Orthodox Christian immigrants may wear lifelong black in the United States to signify their widowhood and devotion to their deceased husband.

In other cultures, however, widowhood is much stricter and unarguably more demeaning to women's rights. Often, women are required to remarry within the family of their late husband after a period of mourning.[citation needed] With the rise of HIV/AIDS levels of infection across the globe, rituals to which women are subjected in order to be "cleansed" or accepted into her new husband's home make her susceptible to the psychological adversities that may be involved as well as imposing health risks.[citation needed]

It is often necessary for a woman to comply with the social customs of her area because her fiscal stature depends on it, but this custom is also often abused by others as a way to keep money within the patriarchal family.[9] It is also uncommon for widows to challenge their treatment because they are often "unaware of their rights under the modern law…because of their low status, and lack of education or legal representation."[7]

As of 2004, women in United States who were "widowed at younger ages are at greatest risk for economic hardship." Similarly, married women who are in a financially unstable household are more likely to become widows "because of the strong relationship between mortality [of the male head] and wealth [of the household]."[9] In underdeveloped and developing areas of the world, conditions for widows continue to be much more severe. However, the United Nations Convention on the Elimination of All Forms of Discrimination against Women ("now ratified by 135 countries"), while slow, is working on proposals which will make certain types of discrimination and treatment of widows (such as violence and withholding property rights) illegal in the countries that have joined CEDAW.[7]