William Topaz McGonagall (March 1825[2] – 29 September 1902) was a Scottish poet of Irish descent. He won notoriety as an extremely bad poet who exhibited no recognition of, or concern for, his peers' opinions of his work.

He wrote about 200 poems, including "The Tay Bridge Disaster" and "The Famous Tay Whale", which are widely regarded as some of the worst in English literature. Groups throughout Scotland engaged him to make recitations from his work, and contemporary descriptions of these performances indicate that many listeners were appreciating McGonagall's skill as a comic music hall character. Collections of his verse remain popular, with several volumes available today.

McGonagall has been lampooned as the worst poet in British history. The chief criticisms are that he was deaf to poetic metaphor and unable to scan correctly. His only apparent understanding of poetry was his belief that it needed to rhyme. McGonagall's fame stems from the humorous effects these shortcomings are considered to generate in his work. Scholars argue that his inappropriate rhythms, weak vocabulary, and ill-advised imagery combine to make his work amongst the most unintentionally amusing dramatic poetry in the English language. His work is in a long tradition of narrative ballads and verse written and published about great events and tragedies, and widely circulated among the local population as handbills. In an age before radio and television, their voice was one way of communicating important news to an avid public.

William McGonagall's parents, Charles and Margaret, were Irish. His Irish surname is a variation on Mag Congail, a popular name in County Donegal.[3][4] Throughout his adult life he claimed to have been born in Edinburgh, giving his year of birth variously as 1825[1] or 1830,[5] but his entry in the 1841 Census gives his place of birth, like his parents', as "Ireland".[6] Biographer Norman Watson suggests that McGonagall may have falsified his place of birth, as a native-born Scotsman would be better treated under the Poor Law of 1845 than one born in Ireland.[7] By looking at census, marriage and death records, David Phillips identifies 1825 as the more likely birth date.[8]:46

The McGonagall family moved several times in search of work, possibly spending time in Glasgow and on South Ronaldsay[1] before settling in Dundee around 1840. Here, William was apprenticed to follow his father's trade as a handloom weaver, putting an end to whatever formal education he may have had. Having learned his trade, McGonagall proceeded to educate himself, taking "great delight in reading books", particularly cheap editions of Shakespeare's plays.[5]

On 11 July 1846,[9] he married Jean King, a fellow mill worker from Stirling. Together they would have five sons and two daughters. Despite the industrial revolution slowly making weavers obsolete, McGonagall appeared to prosper, as there was still need for skilled workers to perform tasks of great complexity.[10]:v

Whilst working at the loom, McGonagall would entertain his shopmates with recitations from Shakespeare. On one occasion they paid a local theatre owner to allow him to appear in the title role in a production of Macbeth. Convinced that the actor playing Macduff was envious of him, McGonagall refused to die in the final act. For this performance, the Book of Heroic Failures awards him the title of the "worst Macbeth" as well as "worst British poet".[11]

The turning point in McGonagall's life came in June 1877. Work as a weaver had become more difficult to find, as his eldest daughter had shamed the family by giving birth to an illegitimate child;[10]:vi at this point, he was seized with a new inspiration:

I seemed to feel as it were a strange kind of feeling stealing over me, and remained so for about five minutes. A flame, as Lord Byron has said, seemed to kindle up my entire frame, along with a strong desire to write poetry; and I felt so happy, so happy, that I was inclined to dance, then I began to pace backwards and forwards in the room, trying to shake off all thought of writing poetry; but the more I tried, the more strong the sensation became. It was so strong, I imagined that a pen was in my right hand, and a voice crying, "Write! Write!"[5]

He wrote his first poem, "An Address to the Rev. George Gilfillan", displaying the hallmarks that would characterise his work. Gilfillan, himself an untrained and poorly reviewed polemic Christian preacher who occasionally dabbled in poetry, commented admiringly "Shakespeare never wrote anything like this."

McGonagall realised if he were to succeed as a poet, he required a patron and wrote to Queen Victoria. He received a letter of rejection, written by a royal functionary, thanking him for his interest.[10]:vii McGonagall took this as praise for his work. During a trip to Dunfermline in 1879, he was mocked by the Chief Templar at the International Organisation of Good Templars, of which McGonagall was a member, who told him his poetry was very bad.[12] McGonagall told the man that "it was so very bad that Her Majesty had thanked McGonagall for what the Chief Templar had condemned."[10]:viii

The letter gave McGonagall confidence in his "poetic abilities", and he felt his reputation could be enhanced further if he were to give a live performance before the Queen. In July 1878, he walked from Dundee to Balmoral, a distance of about 60 miles (97 km) over mountainous terrain and through a violent thunderstorm to perform for Queen Victoria. When he arrived, he announced himself as "The Queen's Poet". The guards informed him "You're not the Queen's poet! Tennyson is the Queen's poet!" (Alfred, Lord Tennyson was the poet laureate). McGonagall presented the letter but was refused entry and had to return home.[5] Undeterred, he continued writing poetry, and he reported events to the newspapers, earning some minor recognition.[10]:vii

Throughout his life McGonagall campaigned against excessive drinking, appearing in pubs and bars to give edifying poems and speeches, which proved popular.[11] He met with the ire of the publicans, on one occasion being pelted with peas for reciting a poem about the evils of "strong drink".[13]

Good people of Dundee, your voices raise,
And to Miss Baxter give great praise;
Rejoice and sing and dance with glee,
Because she has founded a college in Bonnie Dundee.

McGonagall constantly struggled with money and earned money by selling his poems in the streets, or reciting them in halls, theatres and public houses. When he was in periods of financial insecurity, his friends supported him with donations.[10]:viii In 1880, he sailed to London to seek his fortune, and in 1887 to New York. In both instances, he returned unsuccessful.[10]:vii

He found lucrative work performing his poetry at a local circus. He read his poems while the crowd was permitted to pelt him with eggs, flour, herrings, potatoes and stale bread. For this, he received fifteen shillings a night. McGonagall seemed happy with this arrangement, but the events became so raucous that the city magistrates were forced to put a ban on them.[10]:vii-ix McGonagall was outraged and wrote a poem in response entitled "Lines in Protest to the Dundee Magistrates":

Fellow citizens of Bonnie Dundee
Are ye aware how the magistrates have treated me?
Nay, do not stare or make a fuss
When I tell ye they have boycotted me from appearing in Royal Circus,
Which in my opinion is a great shame,
And a dishonour to the city's name (...)

Throughout his life McGonagall seemed oblivious to the general opinion of his poems, even when his audience were pelting him with eggs and vegetables. Author Norman Watson speculates in his biography of McGonagall that he may have been on the "autism-Asperger's spectrum". Christopher Hart, writing in The Sunday Times, says that this seems "likely".[15]

In 1890, McGonagall was in dire straits financially. To help him, his friends funded the publication of a collection of his work, Poetic Gems. The proceeds provided McGonagall with enough money to live on for a time.[10]:ix By 1893, he was annoyed by his mistreatment in the streets and wrote an angry poem threatening to leave Dundee. One newspaper quipped that he would probably stay for another year once he realised "that Dundee rhymes with 1893".[10]:x Though trying his hand at writing prose and endorsements for local businesses for a short time,[10]:x in 1894, he and his wife were forced to move to Perth.

Soon after, he received a letter purporting to be from representatives of King Thibaw Min of Burma. In it, he was informed that the King had knighted him as Topaz McGonagall, Grand Knight of the Holy Order of the White Elephant Burmah.[16] Despite the fact that this was a fairly transparent hoax,[10]:x McGonagall would refer to himself as "Sir William Topaz McGonagall, Knight of the White Elephant, Burmah" in his advertising for the rest of his life.[17]

In 1895, McGonagall and his wife moved to Edinburgh. Here, McGonagall met with some success, becoming a "cult figure"[10]:x and was in great demand. It did not last long, and by 1900 he was once again destitute and now old and sickly. Though he was now too frail to walk the streets selling his poems, donations from friends, as ever, kept him afloat.[10]:xi

He died penniless in 1902, above what is now The Captain's Bar in Edinburgh's South College Street[18] and was buried in an unmarked grave in Greyfriars Kirkyard in Edinburgh. A grave-slab installed to his memory in 1999 is inscribed:

"I am your gracious Majesty
ever faithful to Thee,
William McGonagall, the Poor Poet,
That lives in Dundee."

Additionally, a plaque above 5 South College Street in Edinburgh shows an image of McGonagall, and bears the inscription:

Original Tay Bridge (from the north). 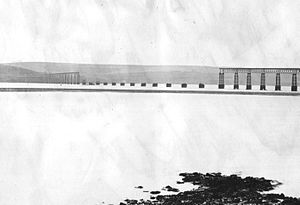 Original Tay Bridge (from the south) the day after the disaster.

"The Tay Bridge Disaster" has been widely reproduced, and recounts the events of the evening of 28 December 1879, when, during a severe gale, the Tay Rail Bridge near Dundee collapsed as a train was passing over it. It begins:

Beautiful Railway Bridge of the Silv'ry Tay!
Alas! I am very sorry to say
That ninety lives have been taken away
On the last Sabbath day of 1879,
Which will be remember'd for a very long time.

(Modern sources give the death toll as 75.)

More than a year before the disaster,[20] McGonagall had written a poem in praise of the Tay Bridge: "The Railway Bridge of the Silvery Tay", in which he specifically expressed a desire

that God will protect all passengers
By night and by day,
And that no accident will befall them while crossing
The Bridge of the Silvery Tay,
For that would be most awful to be seen
Near by Dundee and the Magdalen Green

Once the replacement bridge had been built, he composed an ode to the new construction: "An Address to the New Tay Bridge" "Strong enough all windy storms to defy".

In comedy and theatre

In literature and publications

He is buried in an unmarked grave in Greyfriars Kirkyard, Edinburgh. From c.1950 to 1995 a memorial bench stood on the path immediately to the north side of the church commemorating McGonagall and bearing the typically McGonagall-esque inscription "Feeling tired and need a seat? Sit down here, and rest your feet". The bench fell into disrepair and was not replaced. It is not known what became of its small plaque.

McGonagall's poems were published by his friends, in a series of books bearing variations on the title Poetic Gems. In the modern era, the entire series is reprinted in a single collection called The Complete McGonagall. When a poem was written has no bearing on which of the Poetic Gems books it appears in: the "Address to the Rev. George Gilfillan" and "Requisition to the Queen" were amongst McGonagall's earliest written poems, yet they appear in More Poetic Gems and Last Poetic Gems respectively.

This audio file was created from a revision of the "William McGonagall" article dated , and does not reflect subsequent edits to the article. (Audio help)
More spoken articles
Retrieved from "https://infogalactic.com/w/index.php?title=William_McGonagall&oldid=726221646"
Categories:
Hidden categories: