The appearance of woolly rhinos is known from mummified individuals from Siberia as well as cave paintings.[3] An adult woolly rhinoceros was typically around 3 to 3.8 metres (9.8 to 12.5 ft) in length, with an estimated weight of around 1,800–2,700 kg (4,000–6,000 lb)[1] or 2,000 kg (4,400 lb).[4] The woolly rhinoceros could grow to be 2 m (6.6 ft) tall;[1] the body size was thus comparable to, or slightly larger than, the extant white rhinoceros.[5] Two horns on the skull were made of keratin, the anterior horn being 61 cm (24 in) in length,[6] with a smaller horn between its eyes.[7] It had thick, long fur, small ears, short, thick legs, and a stocky body. Cave paintings suggest a wide dark band between the front and hind legs, but the feature is not universal, and the identification of pictured rhinoceroses as woolly rhinoceros is uncertain.

Its shape was known only from prehistoric cave drawings until a completely preserved specimen (missing only the fur and hooves) was discovered in a tar pit in Starunia, Poland. The specimen, an adult female, is now on display in the Polish Academy of Sciences' Museum of Natural History in Kraków. Several frozen specimens have also been found in Siberia, the latest in 2007.[4] 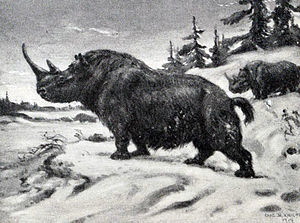 The woolly rhinoceros used its horns for defensive purposes and to attract mates. During Greenland Stadial 2 (the Last Glacial Maximum[8]) the North Sea retreated northward, as sea levels were up to 125 metres (410 ft) lower than today. The woolly rhinoceros roamed the exposed Doggerland and much of Northern Europe and was common in the cold, arid desert that is southern England[9] and the North Sea today. Its geographical range expanded and contracted with the alternating cold and warm cycles, forcing populations to migrate as glaciers receded. The woolly rhinoceros co-existed with woolly mammoths and several other extinct larger mammals of the Pleistocene megafauna. A close relative, Elasmotherium, had a more southern range.

In 2011, a 3.6-million-year-old woolly rhinoceros fossil, the oldest known, was discovered on the cold Tibetan Plateau, suggesting that it existed there during a period of general climate warmth around the earth. It is believed they migrated from there to northern Asia and Europe when the Ice Age began.[10]

Females gave birth to one or two calves.[11]

Controversy has long surrounded the precise dietary preference of Coelodonta as past investigations have found both grazing and browsing modes of life to be plausible. The palaeodiet of the woolly rhinoceros has been reconstructed using several lines of evidence. Climatic reconstructions indicate the preferred environment to have been cold and arid steppe-tundra, with large herbivores forming an important part of the feedback cycle. Pollen analysis shows a prevalence of grasses and sedges within a more complicated vegetation mosaic.[citation needed]

A strain vector biomechanical investigation of the skull, mandible and teeth of a well-preserved last cold stage individual recovered from Whitemoor Haye, Staffordshire, revealed musculature and dental characteristics that support a grazing feeding preference. In particular, the enlargement of the temporalis and neck muscles is consistent with that required to resist the large tugging forces generated when taking large mouthfuls of fodder from the ground. The presence of a large diastema supports this theory.

Comparisons with extant perissodactyls confirm that Coelodonta was a hindgut fermentor with a single stomach, and as such would have grazed upon cellulose-rich, protein-poor fodder. This method of digestion would have required a large throughput of food and thus links the large mouthful size to the low nutritive content of the chosen grasses and sedges.[12]

Recent evidence suggests that woolly rhinos alive in the Arctic during the Last Glacial Maximum consumed approximately equal volumes of forbs, such as Artemisia, and graminoids.[13]

Many species of Pleistocene megafauna, like the woolly rhinoceros, became extinct around the same time period. Human hunting is often cited as one cause.[14] Other theories for the cause of the extinctions are climate change associated with the receding Ice age and the hyperdisease hypothesis (q.v. Quaternary extinction event).[15] One of the more widely accepted theories states that, although the woolly rhinoceros was specialized for cold weather, it was capable of surviving in warmer climates (Shapiro). This suggests that climate change was not the only factor contributing to the rhinoceros's extinction (Naish). Other cold-adapted species, such as reindeer, muskox and wisent, survived this period of climatic change and many others like it, supporting the 'overkill' hypothesis for the woolly rhino.

Recent radiocarbon dating indicates that populations survived as recently as 8,000 BC in western Siberia. However, the accuracy of this date is uncertain, as several radiocarbon plateaus exist around this time. The extinction does not coincide with the end of the last ice age, but does coincide with a minor yet severe climatic reversal that lasted for about 1,000–1,250 years, the Younger Dryas (GS1—Greenland Stadial 1), characterized by glacial readvances and severe cooling globally, a brief interlude in the continuing warming subsequent to the termination of the last major ice age (GS2), thought to have been due to a shutdown of the thermohaline circulation in the ocean due to huge influxes of cold fresh water from the preceding sustained glacial melting during the warmer Interstadial (GI1—Greenland Interstadial 1: ca. 16,000–11,450 14C years B.P.).

The Pinhole Cave Man is a late Paleolithic figure of a man engraved on a rib bone of a woolly rhinoceros, found at Creswell Crags in England.[16]