From Infogalactic: the planetary knowledge core
Jump to: navigation, search
For the Queen of Aragon, see Violant of Bar.

In the 19th century, a romanticised version of her early life was popularised by the play King René’s Daughter by Henrik Hertz, in which she is portrayed as a beautiful blind princess living in an isolated garden paradise. It was later adapted to Tchaikovsky's opera Iolanta. There is no evidence that she was ever blind.

In 1445 she married her cousin Frederick II, Count of Vaudémont (1420–1470), at Nancy. The marriage was a dynastic alliance, arranged to end the dispute which existed between René of Anjou and Frederick's father, Antoine of Vaudémont, regarding the succession to the Duchy of Lorraine.

In 1473, on the death of her nephew Nicolas, she inherited the Duchy of Lorraine, but passed it immediately to her eldest son René II. In 1480, after the death of her father, she did the same with the Duchy of Bar. She died on 23 March 1483, which was the birthday of her sister Queen Margaret, who had died the previous summer. Yolande was 54 years old. 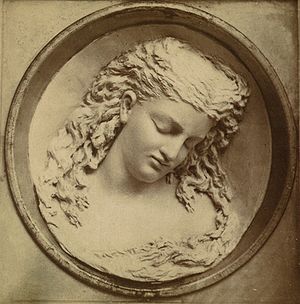 In 1845 the Danish poet Henrik Hertz wrote the poetic drama Kong Renés Datter (King René’s Daughter), a romanticised account of her life, in which she is depicted as a beautiful sixteen-year-old princess who lives in protected garden paradise. Blinded in a childhood accident, her attendants must keep from her the knowledge that she is blind, while a Moorish physician conducts a long slow medical procedure to restore her sight. Once it is complete, she must be told of her blindness to awaken the desire to see. Count Vaudémont arrives for his arranged marriage, which he resents. He accidentally finds her secret garden, and falls in love with her without knowing who she is. He discovers she is blind, and tells her so, but she cannot understand him. However, the physician is now able to complete the treatment and she is cured.

The portrayal of Yolande as a saintly dreaming beauty (regularly placed in an entranced sleep by the physician) was immensely popular. The play was translated into numerous languages. The Russian translation by Fyodor Miller was adapted by Vladimir Zotov, whose version was used as the basis for the opera Iolanta, written by Tchaikovsky, with libretto by his brother Modest Ilyich Tchaikovsky. It received its premiere on 18 December 1892 in St. Petersburg.[2]

The heroine's name was given as "Iolanthe" in the original Danish version and in the English translation by Theodore Martin, making this version of her name familiar in the 19th century. In 1913 a silent film of Hertz's play was made by the Thanhouser Company, starring Maude Fealy as Yolande.[3] It was also adapted in 1990 as the German film Das Licht der Liebe.[4]

In the pseudohistorical book The Holy Blood and the Holy Grail Yolande de Bar was alleged to have been the tenth Grand Master of the Priory of Sion, succeeding her father, King René. The evidence for this claim was derived from the Dossiers Secrets d'Henri Lobineau, forged documents created in 1967.