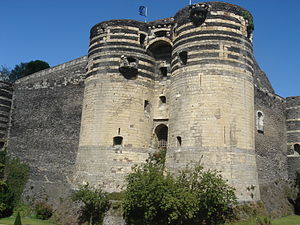 The Castle of Angers, René's birthplace.

René was born on January 16[1] or 19,[citation needed] 1409, in the castle of Angers. He was the second son of Duke Louis II of Anjou, King of Sicily (i.e. Naples), by Yolanda of Aragon. René was the brother of Marie of Anjou, who married the future Charles VII and became Queen of France.[1]

Louis II died in 1417 and his sons, together with their brother-in-law Charles, were brought up under the guardianship of their mother. The elder son, Louis III, succeeded to the crown of Sicily and the duchy of Anjou, René being known as the Count of Guise.[1] In 1419, by his marriage treaty with Isabella, elder daughter of Charles II, Duke of Lorraine, René became heir to the Duchy of Bar, which was claimed as the inheritance of his mother Yolande, and, by right of his wife, heir to the Duchy of Lorraine.[2]

René, then only ten, was to be brought up in Lorraine under the guardianship of Charles II and Louis, cardinal of Bar,[2] both of whom were attached to the Burgundian party, but he retained the right to bear the arms of Anjou. He was far from sympathizing with the Burgundians. Joining the French army at Reims in 1429, he was present at the coronation of Charles VII. When Louis of Bar died in 1430, René came into sole possession of his duchy. The next year, on his father-in-law's death, he succeeded to the duchy of Lorraine.[1] The inheritance was contested by the heir-male, Antoine de Vaudemont, who with Burgundian help defeated René at Bulgneville in July 1431.[2] The Duchess Isabella effected a truce with Antoine, but the duke remained a prisoner of the Burgundians until April 1432,[2] when he recovered his liberty on parole on yielding up as hostages his two sons, John and Louis.[1]

René's title as duke of Lorraine was confirmed by his suzerain, Emperor Sigismund, at Basel in 1433[2] or 1434.[1] This proceeding roused the anger of the Burgundian duke, Philip the Good, who required him early in the next year to return to his prison, from which he was released two years later on payment of a heavy ransom. At the death of his brother Louis III in 1435, he succeeded to the duchy of Anjou and county of Maine.[2] Joanna II, queen of Naples, had adopted Louis III in 1431 and now offered to permit René to inherit her kingdom in his place.[2] The marriage of Marie of Bourbon, niece of Philip of Burgundy, with John, duke of Calabria, René's eldest son, cemented peace between the two princes. After appointing a regency in Bar and Lorraine, he visited his provinces of Anjou and Provence, and in 1438 set sail for Naples, which had been held for him by his wife, the Duchess Isabel.[1] 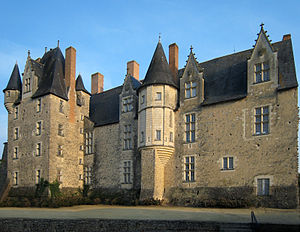 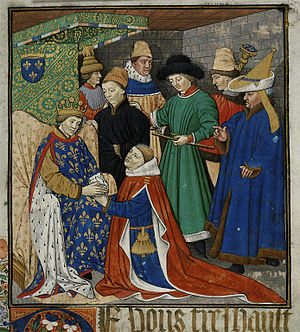 René, as a vassal, paying homage to the King of France.

René's captivity, and the poverty of the Angevin resources due to his ransom, enabled Alfonso V of Aragon, who had been first adopted and then repudiated by Joanna II, to make some headway in the kingdom of Naples, especially as he was already in possession of the island of Sicily. In 1441 Alfonso laid siege to Naples, which he sacked after a six-month siege.[1] René returned to France in the same year, and though he retained the title of king of Naples his effective rule was never recovered.[2] Later efforts to recover his rights in Italy failed. His mother Yolande, who had governed Anjou in his absence, died in 1442.[1]

René took part in the negotiations with the English at Tours in 1444,[1] and peace was consolidated by the marriage of his younger daughter, Margaret, with Henry VI of England at Nancy.[2]

René now made over the government of Lorraine to his son John,[1] who was, however, only formally installed as Duke of Lorraine on the death of Queen Isabella in 1453.[2] René had the confidence of Charles VII, and is said to have initiated the reduction of the men-at-arms set on foot by the king, with whose military operations against the English he was closely associated. He entered Rouen with him in November 1449, and was also with him at Formigny and Caen.[1]

After his second marriage with Jeanne de Laval, daughter of Guy of Laval and Isabella of Brittany,[1] René took a less active part in public affairs, devoting himself to composing poetry and painting miniatures, gardening and raising animals.[2] The fortunes of his house declined in his old age: in 1466, the rebellious Catalonians offered the crown of Aragon to René. His son John, unsuccessful in Italy, was sent to take up the conquest of that kingdom but died—apparently by poison—at Barcelona on 16 December 1470.[1] John's eldest son Nicholas perished in 1473, also under suspicion of poisoning. In 1471, René's daughter Margaret was finally defeated in the Wars of the Roses. Her husband and her son were killed and she herself became a prisoner who had to be ransomed by Louis XI in 1476.[1] 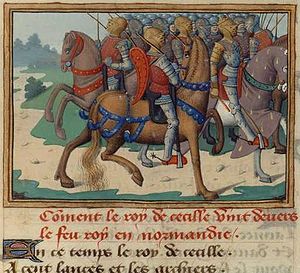 René of Naples with his army.

René II, Duke of Lorraine, Rene's grandson and only surviving male descendant, was gained over to the party of Louis XI, who suspected the king of Sicily of complicity with his enemies, the Duke of Brittany and the Constable Saint-Pol. 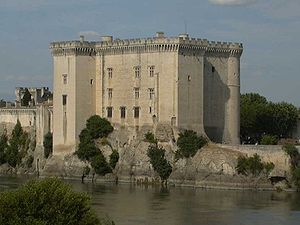 René retired to Provence[2] and in 1474 made a will by which he left Bar to his grandson René II, Duke of Lorraine; Anjou and Provence to his nephew Charles, count of Le Maine. King Louis XI seized Anjou and Bar, and two years later sought to compel René to exchange the two duchies for a pension. The offer was rejected, but further negotiations assured the lapse to the crown of the duchy of Anjou and the annexation of Provence was only postponed until the death of the Count of Le Maine. René died on 10 August 1480 at Aix, his charities having earned him the epithet of "the good". He was buried in the cathedral of Angers.[1]

He founded an order of chivalry, the Ordre du Croissant, which preceded the royal foundation of St Michael but did not survive René.[1] 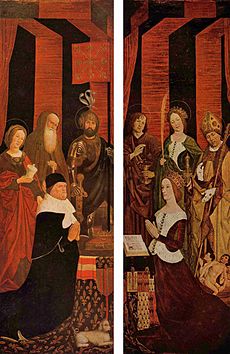 The King of Sicily's fame as an amateur painter[n 1] formerly led to the optimistic attribution to him of many paintings in Anjou and Provence, in many cases simply because they bore his arms. These works are generally in the Early Netherlandish style, and were probably executed under his patronage and direction, so that he may be said to have formed a school of the fine arts in sculpture, painting, goldsmith's work and tapestry.[1] He employed Barthélemy d'Eyck as both painter and varlet de chambre for most of his career.[citation needed]

Two of the most famous works formerly attributed to René are the triptych of the Burning Bush of Nicolas Froment of Avignon in the cathedral of Aix, showing portraits of René and his second wife, Jeanne de Laval, and an illuminated Book of Hours in the French National Library. Among the men of letters attached to his court was Antoine de la Sale, whom he made tutor to his son John. He encouraged the performance of mystery plays; on the performance of a mystery of the Passion at Saumur in 1462 he remitted four years of taxes to the town, and the representations of the Passion at Angers were carried out under his auspices.[1]

He exchanged verses with his kinsman, the poet Charles of Orléans. René was also the author of two allegorical works: a devotional dialogue, Le Mortifiement de vaine plaisance (The Mortification of Vain Pleasure, 1455), and a love quest, Le Livre du Cuer d'amours espris (The Book of the Love-Smitten Heart, 1457). The latter fuses the conventions of Arthurian romance with an allegory of love based on the Romance of the Rose. Both works were exquisitely illustrated by his court painter, Barthélémy d'Eyck. Le Mortifiement survives in eight illuminated manuscripts. Although Barthélémy's original is lost, the extant manuscripts include copies of his miniatures by Jean le Tavernier, Jean Colombe, and others. René is sometimes credited with the pastoral poem "Regnault and Jeanneton",[n 2] but this was more likely a gift to the king honoring his marriage to Jeanne de Laval.[citation needed] 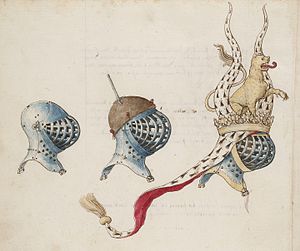 King René's Tournament Book (Le Livre des tournois or Traicte de la Forme de Devis d'un Tournoi; c. 1460) describes rules of a tournament. The most famous and earliest of the many manuscript copies[5] is kept in the French National Library. This is—unusually for a deluxe manuscript—on paper and painted in watercolor. It may represent drawings by Barthélemy d'Eyck, intended as preparatory only, which were later illuminated by him or another artist. There are twenty-six full and double page miniatures. The description given in the book is different from that of the pas d'armes held at Razilly and Saumur; conspicuously absent are the allegorical and chivalresque ornamentations that were in vogue at the time. René instead emphasizes he is reporting on ancient tournament customs of France, Germany and the Low Countries, combining them in a new suggestion on how to hold a tournament. The tournament described is a melee fought by two sides. Individual jousts are only briefly mentioned.[citation needed] 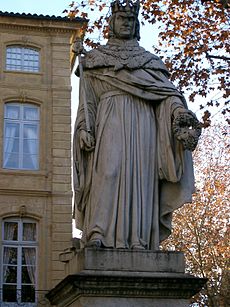 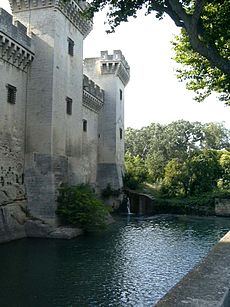 His legitimate children by Isabelle were:

He also had three illegitimate children: 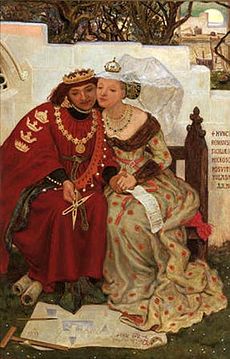 King René's Honeymoon, 1864, an imaginary scene in the life of the king by Ford Madox Brown

He appears as "Reignier" in William Shakespeare's play Henry VI, part 1. His alleged poverty for a king is satirised. He pretends to be the Dauphin to deceive Joan of Arc, but she sees through him. She later claims to be pregnant with his child.

René's honeymoon, devoted with his bride to the arts, is imagined in Walter Scott's novel Anne of Geierstein (1829). The imaginary scene of his honeymoon was later depicted by the Pre-Raphaelite painters Ford Madox Brown, Edward Burne-Jones and Dante Gabriel Rossetti.[9]

In 1845 the Danish poet Henrik Hertz wrote the play King René's Daughter about René and his daughter Yolande de Bar; this was later adapted into the opera Iolanta by Tchaikovsky.

In conspiracy theories, such as the one promoted in The Holy Blood and the Holy Grail, René has been alleged to be the ninth Grand Master of the Priory of Sion.

La Cheminée du roi René (The Fireplace of King René), op. 205, is a suite for wind quintet, composed in 1941 by Darius Milhaud.

Chant du Roi René (Song of King René) is a piece for organ (or harmonium) by Alexandre Guilmant (1837–1911) from his collection of Noels (Op.60). The theme used throughout this piece was alleged to have been written by René (Guilmant's source was Alphonse Pellet, organist at Nîmes Cathedral).

René frequently changed his coat of arms, which represented his numerous and fluctuating claims to titles, both actual and nominal.