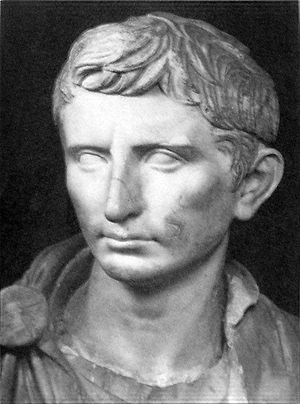 Possibly the most famous Roman adoptee, Augustus first Emperor of the Roman Empire

In ancient Rome, adoption of boys was a fairly common procedure, particularly in the upper senatorial class. The need for a male heir and the expense of raising children and the Roman inheritance rules (Falcidia lex) strictly demanding legitimes were strong incentives to have at least one son, but not too many children. Adoption, the obvious solution, also served to cement ties between families, thus fostering and reinforcing alliances. Adoption of girls, however, was much less common.

In the Imperial period, the system also acted as a mechanism for ensuring a smooth succession, the emperor taking his chosen successor as his adopted son.

As Rome was ruled by a select number of powerful families, every senator's duty was to produce sons to inherit the estate, family name and political tradition. However, a large family was an expensive luxury. Daughters had to be provided with a suitable dowry and sons had to be pushed through the political stages of the cursus honorum.

The higher the political status of a family, the higher was the cost. Roman families therefore typically restricted their families to three children. The six children of Appius Claudius Pulcher (lived 1st century BC) were considered unusual. Sometimes, not having enough children proved to be a wrong choice, as infants could die and the lack of male births was always a risk.

For families with too many sons and the ones with no boys at all, adoption was the only solution. Even the wealthy Lucius Aemilius Paullus Macedonicus did not hesitate in giving his two oldest boys up for adoption, one to the Cornelii Scipiones (Scipio Aemilianus, the conqueror of Carthage during the Third Punic War) the other to Quintus Fabius Maximus Cunctator.

In Roman law, the power to give children in adoption was one of the recognised powers of the paterfamilias. The adopted boy would usually be the oldest, the one with proven health and abilities. Adoption was an expensive agreement for the childless family and quality had to be ensured. Adoption was agreed between families by the mother giving the boy they wanted to adopt (for the most part) equal status, often political allies and/or with blood connections. A plebeian adopted by a patrician would become a patrician, and vice versa; however, at least in Republican times, this required the consent of the Senate (famously in the case of Publius Clodius Pulcher[1]).

A sum of money was exchanged between the parties and the boy assumed the adoptive father's name and a cognomen that indicated his original family (see Roman naming convention). Adoption was neither secretive nor considered to be shameful; the adopted boy was not even expected to cut ties to his original family. Like a marriage contract, adoption was a way to reinforce interfamily ties and political alliances. The adopted child was often in a privileged situation, enjoying both original and adoptive family connections. Almost every politically famous Roman family used it.

Augustus, the first emperor of the Roman Empire, is possibly the most famous example of adoption in Ancient Rome. Born into relative obscurity under the name "Gaius Octavius," he was adopted into the Julii Caesares by testament of his maternal great-uncle, the Roman dictator Julius Caesar. Although Octavius changed his name to "Gaius Julius Caesar," in accordance with Roman naming practices concerning adoption, he did not use the name "Octavianus" but preferred to emphasize his new status as an official Julian instead of reminding the public of his relatively humble origin as an Octavian. Nevertheless, after his adoption, historians refer to him as "Octavian" from 44 BC until 27 BC when he obtained the name "Augustus."

As in the case of Clodius, one could be adopted by a man younger than oneself (which is in fact not a case of adoptio but an adrogatio[2]); his sister,Clodia, is also a rare example of a Roman woman being adopted.

Although not technically adoption, it was common for a dying man to leave guardianship of his children to another man, thus granting him the power of a paterfamilias over what were now effectively his foster children. Examples include the dictator Sulla leaving his children in the care of Lucullus, and Mark Antony's children being left in Augustus' care.

In the Roman Empire, adoption was the most common way of acceding to the throne without use of force. The second emperor, Tiberius, was the adopted son of Augustus, beginning a general tradition that the Emperor adopt his successor. During the Roman Empire's first 200 years, this tradition was common, with Tiberius, Caligula, Nero, Trajan, Hadrian, Antoninus Pius, Marcus Aurelius, and Lucius Verus all becoming Emperor through adoption.