The Third Punic War (Latin: Tertium Bellum Punicum) (149–146 BC) was the third and last of the Punic Wars fought between the former Phoenician colony of Carthage and the Roman Republic. The Punic Wars were named because of the Roman name for Carthaginians: Punici, or Poenici.[5]

This war was a much smaller engagement than the two previous Punic Wars and focused on Tunisia, mainly on the Siege of Carthage, which resulted in the complete destruction of the city, the annexation of all remaining Carthaginian territory by Rome, and the death or enslavement of the entire Carthaginian population. The Third Punic War ended Carthage's independent existence.

In the years between the Second and Third Punic War, Rome was engaged in the conquest of the Hellenistic empires to the east (see Macedonian Wars, Illyrian Wars, and the Roman-Syrian War) and ruthlessly suppressing the Hispanian peoples in the west, although they had been essential to the Roman success in the Second Punic War. Carthage, stripped of allies and territory (Sicily, Sardinia, Hispania), was suffering under a huge indemnity of 200 silver talents to be paid every year for 50 years.

According to Appian the senator Cato the Elder usually finished his speeches on any subject in the Senate with the phrase ceterum censeo Carthaginem esse delendam, which means "Furthermore, it is my opinion that Carthage must be destroyed". Cicero put a similar statement in the mouth of Cato in his dialogue De Senectute.[6] He was opposed by the senator Publius Cornelius Scipio Nasica Corculum, who favoured a different course that would not destroy Carthage, and who usually prevailed in the debates.

The peace treaty at the end of the Second Punic War required that all border disputes involving Carthage be arbitrated by the Roman Senate and required Carthage to get explicit Roman approval before going to war. As a result, in the 50 intervening years between the Second and Third Punic War, Carthage had to take all border disputes with Rome's ally Numidia to the Roman Senate, where they were decided almost exclusively in Numidian favour.

In 151 BC, the Carthaginian debt to Rome was fully repaid, meaning that, in Punic eyes, the treaty was now expired,[7][8] though not so according to the Romans, who instead viewed the treaty as a permanent declaration of Carthaginian subordination to Rome akin to the Roman treaties with its Italian allies. Moreover, the retirement of the indemnity removed one of the main incentives the Romans had to keep the peace with Carthage – there were no further payments that might be interrupted.

The Romans had other reasons to conquer Carthage and her remaining territories.[8][9][10] By the middle of the 2nd century BC, the population of the city of Rome was about 400,000 and rising. Feeding the growing populace was becoming a major challenge. The farmlands surrounding Carthage represented the most productive, most accessible and perhaps the most easily obtainable agricultural lands not yet under Roman control.

Course of the war

Arrowheads, remains of a dagger and stones for slingshots exhibited at the National Museum of Carthage

In 151 BC Numidia launched another border raid on Carthaginian soil, besieging the Punic town of Oroscopa, and Carthage launched a large military expedition (25,000 soldiers) to repel the Numidian invaders. As a result, Carthage suffered a military defeat and was charged with another fifty year debt to Numidia. Immediately thereafter, however, Rome showed displeasure with Carthage’s decision to wage war against its neighbour without Roman consent, and told Carthage that in order to avoid a war it had to “satisfy the Roman People.”

In 149 BC, Rome declared war against Carthage. The Carthaginians made a series of attempts to appease Rome, and received a promise that if three hundred children of well-born Carthaginians were sent as hostages to Rome the Carthaginians would keep the rights to their land and self-government. Even after this was done the allied Punic city of Utica defected to Rome, and a Roman army of 80,000 men gathered there.[1] The consuls then demanded that Carthage hand over all weapons and armour. After those had been handed over, Rome additionally demanded that the Carthaginians move at least 16 kilometres inland, while the city itself was to be burned. When the Carthaginians learned of this they abandoned negotiations and the city was immediately besieged, beginning the Third Punic War.

After the main Roman expedition landed at Utica, consuls Manius Manilius and Lucius Marcius Censorius launched a two-pronged attack on Carthage, but were eventually repulsed by the army of the Carthaginian Generals Hasdrubal the Boeotarch and Himilco Phameas. Censorius lost more than 500 men when they were surprised by the Carthaginian cavalry while collecting timber around the Lake of Tunis.[11] A worse disaster fell upon the Romans when their fleet was set ablaze by fire ships which the Carthaginians released upwind.[12] Manilius was replaced by consul Calpurnius Piso in 149 after a severe defeat of the Roman army at Nepheris, a Carthaginian stronghold south of the city. Scipio Aemilianus's intervention saved four cohorts trapped in a ravine.[13] Nepheris eventually fell to Scipio in the winter of 147-146.[14] In the autumn of 148, Piso was beaten back while attempting to storm the city of Aspis, near Cape Bon. Undeterred, he laid siege to the town of Hippagreta in the north, but his army was unable to defeat the Punics there before winter and had to retreat.[15] When news of these setbacks reached Rome, he was replaced as consul by Scipio Aemilianus.[16]

The Carthaginians endured the siege starting 149 BC to the spring of 146 BC, when Scipio Aemilianus successfully assaulted the city. Though the Punic citizens fought valiantly, they were inevitably gradually pushed back by the overwhelming Roman military force and destroyed. 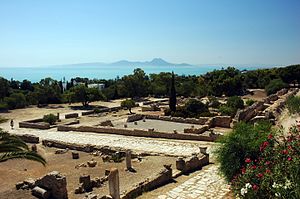 Many Carthaginians died from starvation during the later part of the siege, while many others died in the final six days of fighting. When the war ended, the remaining 50,000 Carthaginians, a small part of the original pre-war population, were, as was the normal fate in antiquity of inhabitants of sacked cities, sold into slavery by the victors.[4] Carthage was systematically burned for 17 days; the city's walls and buildings were utterly destroyed. The remaining Carthaginian territories were annexed by Rome and reconstituted to become the Roman province of Africa.

That Roman forces then sowed the city with salt to ensure that nothing would grow there again is almost certainly a 19th-century invention.[17] Contemporary accounts show that the land surrounding Carthage was declared ager publicus and that it was shared between local farmers, and Roman and Italian ones. North Africa soon became a vital source of grain for the Romans. Roman Carthage was the main hub transporting these supplies to the capital.

Numerous significant Punic cities, such as those in Mauretania, were taken over and rebuilt by the Romans. Examples of these rebuilt cities are Volubilis, Chellah and Mogador. Volubilis, for example, was an important Roman town situated near the westernmost border of Roman conquests. It was built on the site of the previous Punic settlement, but that settlement overlies an earlier neolithic habitation.[18] Utica, the Punic city which changed loyalties at the beginning of the siege, became the capital of the Roman province of Africa.[1]

A century later, the site of Carthage was rebuilt as a Roman city by Julius Caesar, and would later become one of the main cities of Roman Africa by the time of the Empire.