Adventism is a branch of Protestantism[1] with origins in the 19th century American Protestant revival known as the Second Great Awakening.

The name refers to belief in the imminent Second Coming (or "Second Advent") of Jesus Christ. William Miller started the Adventist movement in the 1830s. His followers became known as Millerites.

Although the Adventist churches hold much in common, their theologies differ on whether the intermediate state is unconscious sleep or consciousness, whether the ultimate punishment of the wicked is annihilation or eternal torment, the nature of immortality, whether the wicked are resurrected after the millennium, and whether the sanctuary of Daniel 8 refers to the one in heaven or one on earth.[1] The movement has encouraged the examination of the whole Bible, leading Seventh-day Adventists and some smaller Adventist groups to observe the Sabbath. The General Conference of Seventh-day Adventists has compiled that church's core beliefs in the 28 Fundamental Beliefs (1980 and 2005), which use Biblical references as justification.

In 2010, Adventism claimed some 22 million believers scattered in various independent churches.[2] The largest church within the movement — the Seventh-day Adventist Church — is one of the largest Christian churches in the world, with more than 18 million baptized members.[3]

Adventism began as an inter-denominational movement. Its most vocal leader was William Miller. Between 50,000 and 100,000 people in the United States supported Miller's predictions of Christ's return. After the "Great Disappointment" of October 22, 1844 many people in the movement gave up on Adventism. Of those remaining Adventist, the majority gave up believing in any prophetic (biblical) significance for the October 22 date, yet they remained expectant of the near Advent (second coming of Jesus).[1][4]

Of those who retained the October 22 date, many maintained that Jesus had come not literally but "spiritually", and consequently were known as "spiritualizers". A small minority held that something concrete had indeed happened on October 22, but this event had been misinterpreted. This viewpoint later emerged and crystallized with the Seventh-day Adventist Church, the largest remaining body today.[1][4]

The development of branches of Adventism in the 19th century.

The Albany Conference in 1845, attended by 61 delegates, was called to attempt to determine the future course and meaning of the Millerite movement. Following this meeting, the "Millerites" then became known as "Adventists" or "Second Adventists". However, the delegates disagreed on several theological points. Four groups emerged from the conference: The Evangelical Adventists, The Life and Advent Union, the Advent Christian Church, and the Seventh-day Adventist Church.

The largest group was organized as the American Millennial Association, a portion of which was later known as the Evangelical Adventist Church.[1] Unique among the Adventists, they believed in an eternal hell and consciousness in death. They declined in numbers, and by 1916 their name did not appear in the United States Census of Religious Bodies. It has diminished to almost non-existence today. Their main publication was the Advent Herald,[5] of which Sylvester Bliss was the editor until his death in 1863. It was later called the Messiah’s Herald.

The Life and Advent Union was founded by George Storrs in 1863. He had established The Bible Examiner in 1842. It merged with the Adventist Christian Church in 1964.

The Seventh-day Adventist Church officially formed in 1863. It believes in the sanctity of the seventh-day Sabbath as a holy day for worship. It published the Adventist Review, Kids Review, and Sabbath Herald. It has grown to a large worldwide denomination and has a significant network of medical and educational institutions.

Miller did not join any of the movements, and he spent the last few years of his life working for unity, before dying in 1849.

The Handbook of Denominations in the United States, 12th edn., describes the following churches as "Adventist and Sabbatarian (Hebraic) Churches":

The Advent Christian Church was founded in 1860 and had 25,277 members in 302 churches in 2002 in America. It is a "first-day" body of Adventist Christians founded on the teachings of William Miller. It adopted the "conditional immortality" views of Charles F. Hudson and George Storrs who formed the "Advent Christian Association" in Salem, Massachusetts in 1860.

The Primitive Advent Christian Church is a small group which separated from the Advent Christian Church. It differs from the parent body mainly on two points. Its members observe foot washing as a rite of the church, and they teach that reclaimed backsliders should be baptized (even though they had formerly been baptized). This is sometimes referred to as rebaptism.

The Seventh-day Adventist Church, founded in 1863, had over 19,500,000 baptized members (not counting children of members) worldwide as of 30.6.2016.[7] It is best known for its teaching that Saturday, the seventh day of the week, is the Sabbath and is the appropriate day for worship. However, it is the second coming of Jesus Christ along with the Judgement day, based on the three angels message in Revelation 14: 6-13, that is the main doctrine of SDA.

The Seventh Day Adventist Reform Movement is a small offshoot with an unknown number of members from the Seventh-day Adventist Church caused by disagreement over military service on the Sabbath day during World War I.

The Davidians (originally named Shepherd's Rod) is a small offshoot with an unknown number of members made up primarily of voluntarily disfellowshipped members of the Seventh-day Adventist Church. They were originally known as the Shepherd's Rod and are still sometimes referred to as such. The group derives its name from two books on Bible doctrine written by its founder, Victor Houteff, in 1929.

The Branch Davidians were a split ("branch") from the Davidians. Many of them were killed during the infamous Waco Siege of April 1993.

Main article: General Conference of the Church of God (Seventh-Day)

Church of God and Saints of Christ

Main article: Church of God and Saints of Christ

The Church of God and Saints of Christ was founded in 1896 and had an estimated 40,000 members in approximately 200 congregations in 1999 in America.

Many denominations known as "Church of God" have Adventist origins.

The Bible Students movement founded by Charles Taze Russell had in its early development close connections with the Millerite movement and stalwarts of the Adventist faith, including George Storrs and Joseph Seiss. The various groupings of Bible Students currently have a cumulative membership of less than 20,000 worldwide. Although Jehovah's Witnesses and Bible Students do not categorize themselves as part of the Millerite Adventist movement (or other denominations, in general), some theologians do categorize the group and schisms as Millerite Adventist because of its teachings regarding an imminent Second Coming and use of specific dates. As of January 2014 there are approximately 8 million Jehovah's Witnesses worldwide. 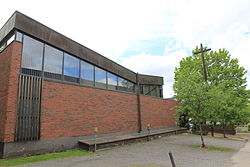 An adventist church in Jyväskylä, Finland.