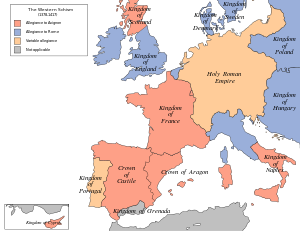 Map showing support for Avignon (red) and Rome (blue) during the Western Schism; this breakdown is accurate until the Council of Pisa (1409), which created a third line of claimants.
Caution: this map is highly inaccurate in some regions and borders, see Talk page and here.

The Western Schism or Papal Schism was a split within the Roman Catholic Church which lasted from 1378 to 1417.[1] Three men simultaneously claimed to be the true pope. Driven by politics rather than any theological disagreement, the schism was ended by the Council of Constance (1414–1418). For a time these rival claims to the papal throne damaged the reputation of the office. The affair is sometimes referred to as the Great Schism, although this term is typically reserved for the East–West Schism (1054) between the Western Churches answering to the See of Rome and the Orthodox Churches of the East.

The Schism in the Western Roman Church resulted from the return of the papacy to Rome under Gregory XI on January 17, 1377,[2] ending the Avignon Papacy, which had developed a reputation for corruption that estranged major parts of Western Christendom. This reputation can be attributed to perceptions of predominant French influence and to the papal curia's efforts to extend its powers of patronage and increase its revenues.

After Pope Gregory XI died (in 1378), the Romans rioted to ensure the election of a Roman for pope. On April 8, 1378 the cardinals elected a Neapolitan when no viable Roman candidates presented themselves. Urban VI, born Bartolomeo Prignano, the Archbishop of Bari, was elected. Urban had been a respected administrator in the papal chancery at Avignon, but as pope he proved suspicious, reformist, and prone to violent outbursts of temper. Many of the cardinals who had elected him soon regretted their decision: the majority removed themselves from Rome to Anagni, where, even though Urban was still reigning, they elected Robert of Geneva as a rival pope on September 20 of the same year. Robert took the name Clement VII and reestablished a papal court in Avignon. The second election threw the Church into turmoil. There had been antipopes—rival claimants to the papacy—before, but most of them had been appointed by various rival factions; in this case, a single group of leaders of the Church had created both the pope and the antipope.

The conflicts quickly escalated from a church problem to a diplomatic crisis that divided Europe. Secular leaders had to choose which claimant they would recognize:

In the Iberian Peninsula there were the Ferdinand Wars (Guerras fernandinas) and the 1383–1385 Crisis in Portugal, during which dynastic opponents supported rival claimants to the papal office. 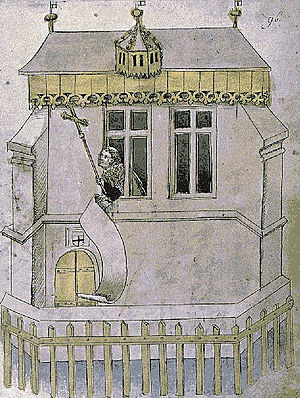 Habemus Papam at the Council of Constance

Sustained by such national and factional rivalries throughout Catholic Christianity, the schism continued after the deaths of both initial claimants; Boniface IX, crowned at Rome in 1389, and Benedict XIII, who reigned in Avignon from 1394, maintained their rival courts. When Boniface died in 1404, the eight cardinals of the Roman conclave offered to refrain from electing a new pope if Benedict would resign; but when his legates refused on his behalf, the Roman party then proceeded to elect Innocent VII.

In the intense partisanship characteristic of the Middle Ages, the schism engendered a fanatical hatred noted by Johan Huizinga:[3] when the town of Bruges went over to the "obedience" of Avignon, a great number of people left to follow their trade in a city of Urbanist allegiance; in 1382, the oriflamme, which might only be unfurled in a holy cause, was taken up against the Flemings, because they were Urbanists, that is, schismatics.

Efforts were made to end the Schism through force or diplomacy. The French crown even tried to coerce Benedict XIII, whom it nominally supported, into resigning. None of these remedies worked. The suggestion that a church council should resolve the Schism, first made in 1378, was not adopted at first because canon law required that a pope call a council. Eventually theologians like Pierre d'Ailly and Jean Gerson, as well as canon lawyers like Francesco Zabarella, adopted arguments that equity permitted the Church to act for its own welfare in defiance of the letter of the law.

Eventually the cardinals of both factions secured an agreement that Benedict and Pope Gregory XII would meet at Savona. They balked at the last moment, and both colleges of cardinals abandoned their popes. A church council was held at Pisa in 1409 under the auspices of the cardinals to try solving the dispute, but it added to the problem by electing another incumbent, Alexander V. He reigned briefly from June 26, 1409, to his death in 1410, when he was succeeded by John XXIII, who won some but not universal support.

Finally, a council was convened by Pisan pope John XXIII in 1414 at Constance to resolve the issue. This was endorsed by Gregory XII, Innocent VII's successor in Rome, thus ensuring the legitimacy of any election. The council, advised by the theologian Jean Gerson, secured the resignations of John XXIII and Gregory XII, who resigned in 1415, while excommunicating the claimant who refused to step down, Benedict XIII. The Council then elected Pope Martin V, essentially ending the schism. Nonetheless, the Crown of Aragon did not recognize Martin V and continued to recognize Benedict XIII. Archbishops loyal to Benedict XIII subsequently elected Antipope Benedict XIV (Bernard Garnier) and three followers simultaneously elected Antipope Clement VIII, but the Western Schism was by then practically over. (Clement VIII resigned in 1429 and apparently recognized Martin V.)

The line of Roman popes is now recognized as the legitimate line, but confusion on this point continued until the 19th century. Pope Pius II decreed that no appeal could be made from pope to council; this left no way to undo a papal election by anyone but the elected pope. No such crisis has arisen since the 15th century, and so there has been no need to revisit this decision. The alternate papal claimants have become known in history as antipopes. Those of Avignon were dismissed by Rome early on, but the Pisan popes were included in the Annuario Pontificio as popes well into the 20th century. Thus the Borgia pope Alexander VI took his regnal name in sequence after the Pisan Alexander V.

Gregory's resignation was the last time a pope would stand down from papacy before death until the resignation of Pope Benedict XVI in early 2013.

Doubt still shrouds the validity of the three rival lines of pontiffs during the four decades subsequent to the still disputed papal election of 1378. This makes suspect the credentials of the cardinals created by the Roman, Avignon, and Pisan claimants to the Apostolic See. Unity was finally restored without a definitive solution to the question; for the Council of Constance succeeded in terminating the Western Schism, not by declaring which of the three claimants was the rightful one, but by eliminating all of them by forcing their abdication or deposition, and then setting up a novel arrangement for choosing a new pope acceptable to all sides. To this day the Church has never made any official, authoritative pronouncement about the papal lines of succession for this confusing period; nor has Martin V or any of his successors. Modern scholars are not agreed in their solutions, although they tend to favor the Roman line.[4]