From Infogalactic: the planetary knowledge core
Jump to: navigation, search
For other uses, see Diet of Worms (disambiguation). 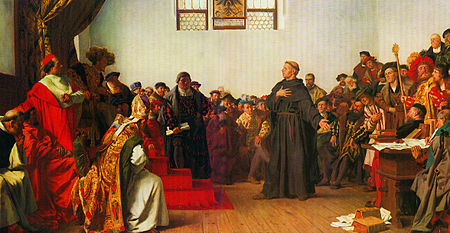 Luther at the Diet of Worms, by Anton von Werner, 1877

The Diet of Worms 1521 (German: Reichstag zu Worms, [ˈʁaɪçstaːk tsuː ˈvɔɐms]) was an imperial diet of the Holy Roman Empire held at the Heylshof Garden in Worms, then an Imperial Free City of the Empire. An imperial diet was a formal deliberative assembly of the whole Empire. This one is most memorable for the Edict of Worms (Wormser Edikt), which addressed Martin Luther and the effects of the Protestant Reformation. It was conducted from 28 January to 25 May 1521, with the Emperor Charles V presiding.

In June of the previous year, 1520, Pope Leo X issued the Papal bull Exsurge Domine ("Arise, O Lord"), outlining forty-one purported errors found in Martin Luther's Ninety-five Theses and other writings related to or written by him. Luther was summoned by the emperor. Prince Frederick III, Elector of Saxony obtained an agreement that if Luther appeared he would be promised safe passage to and from the meeting. This guarantee was essential after the treatment of Jan Hus, who was tried and executed at the Council of Constance in 1415 despite a promise of safe conduct.

Emperor Charles V commenced the Imperial Diet of Worms on 28 January 1521. Luther was summoned to renounce or reaffirm his views. When he appeared before the assembly on 16 April, Johann Eck, an assistant of the Archbishop of Trier (Richard von Greiffenklau zu Vollrads at that time), acted as spokesman for the emperor. 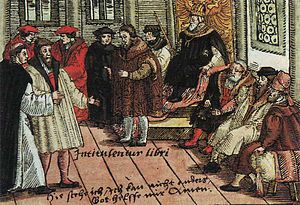 The main events of the Diet of Worms relating to Luther took place from 16 to 18 April 1521.

On 16 April, Luther arrived in Worms. Luther was told to appear the following day before the Diet at 4 p.m. Dr. Jeromee Schurff, Wittenberg professor in Canon Law, was to act as Luther’s lawyer before the Diet.

On 17 April, the Imperial Herald Sturm and Pappenheim came for Luther. Pappenheim reminded Luther that he should speak only in answer to direct questions from the presiding officer, Johann Eck. Eck asked if a collection of books was Luther’s and if he was ready to revoke their heresies. Dr. Schurff said, "Please have the titles read." There were 25 of them, probably including The 95 Theses, Resolutions Concerning the 95 Theses, On the Papacy at Rome, Address to the Christian Nobility, The Babylonian Captivity of the Church, and On the Freedom of a Christian, all of which had been written prior to the Diet of Worms. Luther requested more time for a proper answer, so he was given until the next day at 4 p.m.

On 18 April, Luther, stating he'd prayed for long hours, consulted with friends and mediators, and presented himself before the Diet. When the counselor put the same questions to him, Luther first apologized that he lacked the etiquette of the court. Then he answered, "They are all mine, but as for the second question, they are not all of one sort." Luther went on to place the writings into three categories: (1) Works which were well received by even his enemies: those he would not reject. (2) Books which attacked the abuses, lies and desolation of the Christian world and the papacy: those, Luther believed, could not safely be rejected without encouraging abuses to continue. To retract them would be to open the door to further oppression.[1] "If I now recant these, then, I would be doing nothing but strengthening tyranny".[1] (3) Attacks on individuals: he apologized for the harsh tone of these writings but did not reject the substance of what he taught in them; if he could be shown from the Scriptures that he was in error, Luther continued, he would reject them. Luther concluded by saying

Unless I am convinced by the testimony of the Scriptures or by clear reason (for I do not trust either in the pope or in councils alone, since it is well known that they have often erred and contradicted themselves), I am bound by the Scriptures I have quoted and my conscience is captive to the Word of God. I cannot and will not recant anything, since it is neither safe nor right to go against conscience. May God help me. Amen.[2]

According to tradition, Luther is said to have declared, "Here I stand, I can do no other," before concluding with "God help me. Amen."[3] However, there is no indication in the transcripts of the Diet or in eyewitness accounts that he ever said this, and most scholars now doubt these words were spoken. 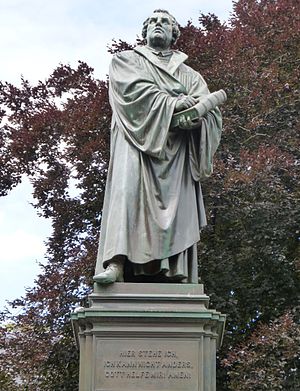 Eck informed Luther that he was acting like a heretic:

"'Martin,' said he, 'there is no one of the heresies which have torn the bosom of the church, which has not derived its origin from the various interpretation of the Scripture. The Bible itself is the arsenal whence each innovator has drawn his deceptive arguments. It was with biblical texts that Pelagius and Arius maintained their doctrines. Arius, for instance, found the negation of the eternity of the Word—an eternity which you admit, in this verse of the New Testament—Joseph knew not his wife till she had brought forth her first-born son; and he said, in the same way that you say, that this passage enchained him. When the fathers of the council of Constance condemned this proposition of John Huss— The church of Jesus Christ is only the community of the elect, they condemned an error; for the church, like a good mother, embraces within her arms all who bear the name of Christian, all who are called to enjoy the celestial beatitude.'"[4]

Private conferences were held to determine Luther's fate. Before a decision was reached, Luther fled. During his return to Wittenberg, he disappeared.

The Edict of Worms was a decree issued on 25 May 1521 by Emperor Charles V, declaring:

For this reason we forbid anyone from this time forward to dare, either by words or by deeds, to receive, defend, sustain, or favour the said Martin Luther. On the contrary, we want him to be apprehended and punished as a notorious heretic, as he deserves, to be brought personally before us, or to be securely guarded until those who have captured him inform us, whereupon we will order the appropriate manner of proceeding against the said Luther. Those who will help in his capture will be rewarded generously for their good work.

The Papal nuncio at the diet, Girolamo Aleandro, drew up and proposed the denunciations of Luther that were embodied in the Edict of Worms, promulgated on 25 May. The Edict declared Luther to be an obstinate heretic and banned the reading or possession of his writings.

It was the culmination of an ongoing struggle between Martin Luther and the Catholic Church over reform, especially in practice of donations for indulgences. However, there were other deeper issues that revolved around both theological concerns:

To protect the authority of the Pope and the Church, as well as to maintain the doctrine of indulgences, ecclesiastical officials convinced Charles V that Luther was a threat and persuaded him to authorize his condemnation by the Holy Roman Empire. Luther escaped arrest and remained in seclusion at Wartburg castle for several months where he continued to write and translate the New Testament into German.

Despite the agreement that he could return home safely, it was privately understood that Luther would soon be arrested and punished. To protect him from this fate, Prince Frederick seized him on his way home and hid him in Wartburg Castle. It was during his time in Wartburg that Luther began his German translation of the Bible. Martin Luther's powerful testimony of faith at the Diet of Worms in 1521 made an indelible impression upon the mind of George, Margrave of Brandenburg-Ansbach, who turned his eyes to the new faith earlier than any other German prince or any other member of the House of Hohenzollern. Moreover, Luther entered into correspondence with him, discussing with him the most important problems of faith. The edict was temporarily suspended at the Diet of Speyer 1526 but then reinstated in 1529.

When Luther eventually reemerged from the Wartburg, the emperor, distracted with other matters, did not press for Luther's arrest. Ultimately, because of rising public support for Luther among the German people and the protection of certain German princes, the Edict of Worms was never enforced in Germany. However, in the Low Countries (comprising modern-day Belgium, Luxembourg, and the Netherlands), the Edict was initially enforced against Luther's most active supporters. This could be done because these countries were under the direct reign of Emperor Charles V and his appointed regent, Margaret of Austria, Duchess of Savoy (and Charles's aunt). In December 1521, Jacob Probst, prior of the Augustinian monastery in Antwerp, was the first Luther-supporting cleric to be arrested and prosecuted under the terms of the Worms Edict. In February 1522, Probst was compelled to make public recantation and repudiation of Luther's teachings. Later that year, additional arrests were made among the Augustinians in Antwerp. Two monks, Johann Esch and Heinrich Voes, refused to recant; on 1 July 1523, they were burned at the stake in Brussels.[7]