The Alhambra Decree (also known as the Edict of Expulsion) was an edict issued on 31 March 1492, by the joint Catholic Monarchs of Spain (Isabella I of Castile and Ferdinand II of Aragon) ordering the expulsion of Jews from the Kingdoms of Castile and Aragon and its territories and possessions by 31 July, of that year.[1]

The edict was formally revoked on 16 December 1968,[2] following the Second Vatican Council.

In 2014, the government of Spain passed a law allowing dual citizenship to Jewish descendants who apply, in order to "compensate for shameful events in the country’s past."[3] Thus, Sephardic Jews who are descendants of those Jews expelled from Spain due to the Alhambra Decree, and can prove it, can "become Spaniards without leaving home or giving up their present nationality."[4][5]

Main article: History of the Jews in Spain

Beginning in the 8th century, Muslims had conquered and settled most of the Iberian Peninsula. Jews, who had lived in these regions since Roman times, were considered "People of the Book" and given special status and often thrived.[6] The tolerance of the Muslim Moorish rulers of al-Andalus attracted Jewish immigration, and Jewish enclaves in Muslim Iberian cities flourished as places of learning and commerce. Progressively, however, living conditions for Jews in al-Andalus became harsher, especially after the fall of the Umayyad Caliphate.[6]

The Reconquista, the gradual reconquest of Muslim Iberia by the Christian kingdoms, was driven by a powerful religious motivation: to reclaim Iberia for Christendom following the Umayyad conquest of Hispania centuries before. By the 14th century, most of the Iberian Peninsula (present-day Spain and Portugal) had been conquered by the Christian kingdoms of Castile, Aragon, León, Galicia, Navarre, and Portugal.

Overt hostility against Jews became more pronounced, finding expression in brutal episodes of violence and oppression. Thousands of Jews sought to escape these attacks by converting to Christianity; they were commonly called conversos, New Christians, or marranos. At first these conversions seemed an effective solution to the cultural conflict: many converso families met with social and commercial success. But eventually their success made these new Catholics unpopular with some of the clergy of the Church and royal hierarchies.

These suspicions on the part of Christians were only heightened by the fact that some of the coerced conversions were undoubtedly insincere. Some, but not all, conversos had understandably chosen to salvage their social and commercial prestige by the only option open to them – baptism and embrace of Christianity – while privately adhering to their Jewish practice and faith. These secret practitioners are commonly referred to as crypto-Jews or marranos.

The existence of crypto-Jews was a provocation for secular and ecclesiastical leaders who were already hostile toward Spain's Jewry. The uncertainty over the sincerity of Jewish converts added fuel to the fire of antisemitism in 15th century Spain.

Main article: History of the Jews in Europe 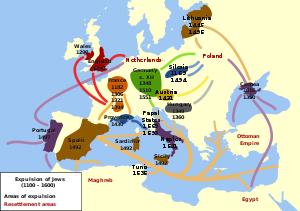 From the 13th to the 16th centuries European countries expelled the Jews from their territory on at least 15 occasions. Spain was preceded by England, France and some German states, among many others, and succeeded by at least five more expulsions.[7][8]

The hostility toward Jews was brought to a climax by the "Catholic Monarchs" Ferdinand and Isabella, whose marriage in 1469 formed a personal union of the crowns of Aragon and Castile, with coordinated policies between their distinct kingdoms.

Ferdinand and Isabella were disturbed at reports that some Jewish converts to Christianity were insincere in their conversion, continued to practice Judaism in secret (see Crypto-Judaism), and were trying to draw other conversos back into the Jewish fold. In 1478, Ferdinand and Isabella made formal application to Rome for a tribunal of the Inquisition in Castile to investigate these and other suspicions. In 1487, King Ferdinand established the Spanish Inquisition in Aragon.[9] It is not known how many had not truly converted, had lapsed from their new Christianity, or were attempting to persuade others to revert.

The independent Islamic Emirate of Granada had been a tributary state to Castile since 1238. In 1491, in preparation for an imminent transition to Castilian territory, the Treaty of Granada was signed by Emir Muhammad XII and the Queen of Castile, protecting the religious freedoms of the Muslims there. In 1492, Ferdinand and Isabella completed the Catholic Reconquista of the Iberian Peninsula from Islamic al-Andalus by victory in the Battle of Granada. 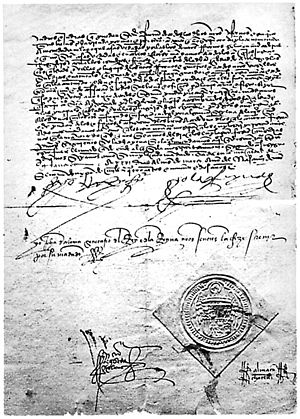 A signed copy of the Edict of Expulsion

The king and queen issued the Alhambra Decree less than three months after the surrender of Granada. This was primarily a decision of Isabella, not her husband Fernando.[citation needed] That her confessor had just changed from the tolerant Hernando de Talavera to the very intolerant Francisco Jiménez de Cisneros suggests that Cisneros may well have had a role in Isabel's decision.[10] In it, Jews were accused of trying "to subvert their holy Catholic faith and trying to draw faithful Christians away from their beliefs." These measures were not new in Europe.[11]

Some Jews were only given four months and ordered to convert to Christianity or leave the country. Under the edict, Jews were promised royal "protection and security" for the effective three-month window before the deadline. They were permitted to take their belongings with them – except "...gold or silver or minted money or other things prohibited by the laws of our kingdoms...".[1]

The Spanish Jews who chose to leave Spain dispersed throughout the region of North Africa known as the Maghreb. In those regions, they often intermingled with the already existing Mizrahi (Arab Jewish) communities, becoming the ancestors of the Moroccan, Algerian, Tunisian and Libyan Jewish communities.

Scholars disagree about how many Jews left Spain as a result of the decree; the numbers vary between 130,000 and 800,000. Many (likely more than half) went to Portugal, gaining only a few years of respite from persecution. The Jewish community in Portugal (perhaps then some 10% of that country's population)[13] were then declared Christians by Royal decree unless they left.

Tens of thousands of Jews died while trying to reach safety. In the last days before the expulsion, rumors spread throughout Spain that many Jews had swallowed gold and diamonds they hoped to take with them. As a result, many Jews were knifed to death and had their stomachs cut open by brigands looking for treasure. In another example, Jews who tried escaping via the sea were often charged exorbitant sums by Spanish ship captains, and were then sometimes tossed overboard in the middle of the sea.[14][verification needed][15]

Other Spanish Jews (estimates range between 50,000 and 70,000)[citation needed] chose to avoid expulsion by conversion to Christianity. However, their conversion did not protect them from ecclesiastical hostility after the Spanish Inquisition came into full effect; persecution and expulsion were common. Many of these "New Christians" were eventually forced to either leave the countries or intermarry with the local populace by the dual Inquisitions of Portugal and Spain. Many settled in North Africa, Latin America [16] or elsewhere in Europe, most notably the Netherlands (see Sephardic Jews in the Netherlands).

A Y chromosome DNA test conducted by the University of Leicester and the Pompeu Fabra University has indicated that around 20% of Spaniards today have direct patrilineal descent from Sephardic Jews and Phoenicians. The conclusions stemming from the results [17][18][19][20][21] has been questioned by the authors themselves [22][23][24][25] and by Stephen Oppenheimer since the genetic markers used to identify Sephardic ancestry could also have been brought to Spain by other Mediterranean populations such as Phoenicians, Arabs or earlier Neolithic population movements.[26]

The Spanish government has actively pursued a policy of reconciliation with the descendants of its expelled Jews. In 1992, in a ceremony marking the 500th anniversary of the Edict of Expulsion, King Juan Carlos (wearing a skullcap) prayed alongside Israeli president Chaim Herzog and members of the Jewish community in the Beth Yaacov Synagogue. The King said: 'Sefarad (the Hebrew name for Spain) is no longer nostalgia, but a place where Jews should not be told to feel as if at home [a customary greeting to guests in Spain], because Hispano-Jews are at home in Spain. What matters ... is the desire to analyse and project the past in regards to our future.'[27]

From November 2012 Sephardic Jews have had the right to automatic Spanish nationality without the requirement of residence in Spain. Prior to November 2012, Sephardic Jews already had the right to obtain Spanish citizenship after a reduced residency period of two years (versus ten years for foreigners). While their citizenship is being processed, Sephardic Jews are entitled to the consular protection of the Kingdom of Spain.[28] This makes Spain the only nation besides Israel that currently grants automatic citizenship to the descendants of Jews expelled during the European medieval evictions. Today the number of Jews in Spain is around 18,000, out of a population of about 47,000,000, i.e. 0.039%.

There has been no discussion of financial compensation, or restoration of property.