The use of the term Mizrahi can be somewhat controversial. Before the establishment of the state of Israel, Mizrahi Jews did not identify themselves as a separate ethnic subgroup. Instead, Mizrahi Jews generally characterized themselves as Sephardi, because they follow the traditions of Sephardic Judaism (although with some differences among the minhagim of the particular communities). This has resulted in a conflation of terms, particularly in Israel, and in religious usage, where "Sephardi" is used in a broad sense to include Mizrahi Jews and Maghrebi Jews as well as Sephardim proper. Indeed, from the point of view of the official Israeli rabbinate, any rabbis of Mizrahi origin in Israel are under the jurisdiction of the Sephardi Chief Rabbi of Israel. Mizrahi Jews make up the largest ethnic group in Israel,[4] and as of 2005, over 50% of Israeli Jews are of at least partial Mizrahi ancestry.[5][6]

"Mizrahi" is literally translated as "Oriental", "Eastern", מזרח (Mizraḥ), Hebrew for "east." In the past the word "Mizrahim," corresponding to the Arabic word Mashriqiyyun (Easterners), referred to the natives of Syria, Iraq and other Asian countries, as distinct from those of North Africa (Maghribiyyun). In medieval and early modern times the corresponding Hebrew word ma'arav was used for North Africa. In Talmudic and Geonic times, however, this word "ma'arav" referred to the land of Israel as contrasted with Babylonia. For this reason many object to the use of "Mizrahi" to include Moroccan and other North African Jews.

The term Mizrahim or Edot Hamizraḥ, Oriental communities, grew in Israel under the circumstances of the meeting of waves of Jewish immigrants from the Europe, North Africa, Middle East and Central Asia, followers of Ashkenazi, Sephardic and Yemenite rites. In modern Israeli usage, it refers to all Jews from Central and West Asian countries, many of them Arabic-speaking Muslim-majority countries. The term came to be widely used more by Mizrahi activists in the early 1990s. Since then in Israel it has become an accepted semi-official and media designation.[7]

Most of the "Mizrahi" activists actually originated from North African Jewish communities, traditionally called "Westerners" (Maghrebi), rather than "Easterners" (Mashreqi). Many Jews originated from Arab and Muslim countries today reject "Mizrahi" (or any) umbrella description and prefer to identify themselves by their particular country of origin, or that of their immediate ancestors, e.g. "Moroccan Jew", or prefer to use the old term "Sephardic" in its broader meaning.[citation needed]

Today, many identify all non-Ashkenasi rite Jews as Sephardic - in modern Hebrew "Sfaradim", mixing ancestral origin and religious rite. This broader definition of "Sephardim" as including all, or most, Mizrahi Jews is also common in Jewish religious circles. During the past century, the Sephardic rite absorbed the unique rite of the Yemenite Jews and lately the Ethiopian Jewish religious leaders in Israel have also joined the Sefardic rite collectivities, especially following rejection of their Jewishness by Ashkenasi and Hassidic circles. 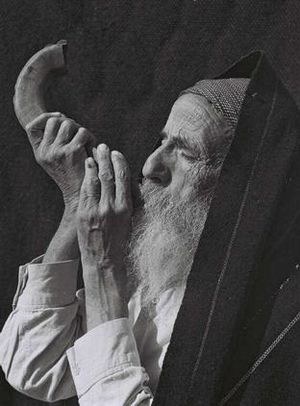 The reason for this classification of all Mizrahim under Sephardic rite is that most Mizrahi communities use much the same religious rituals as Sephardim proper due to historical reasons. The prevalence of the Sephardic rite among Mizrahim is partially a result of Sephardim proper joining some of Mizrahi communities following the 1492 expulsion from Sepharad (Spain and Portugal). Over the last few centuries, the previously distinctive rites of the Mizrahi communities were influenced, superimposed upon or altogether replaced by the rite of the Sephardim, perceived as more prestigious. Even before this assimilation, the original rite of many Jewish Oriental communities was already closer to the Sephardi rite than to the Ashkenazi one. For this reason, "Sephardim" has come to mean not only "Spanish Jews" proper but "Jews of the Spanish rite", just as "Ashkenazim" is used for "Jews of the German rite", whether or not their families originate in Germany.

Many of the Sephardic Jews exiled from Spain resettled in greater or lesser numbers in many Arabic-speaking countries, such as Syria and Morocco. In Syria, most eventually intermarried with and assimilated into the larger established communities of Arabic-speaking Jews and Mizrahi Jews. In some North African countries such as Morocco, Sephardic Jews came in greater numbers and largely contributed to the Jewish settlements that the pre-existing Jews were assimilated by them. Either way, this assimilation, combined with the use of the Sephardic rite, led to the popular designation and conflation of most non-Ashkenasi Jewish communities from the Middle East and North Africa as "Sephardic" rite, whether or not they were descended from Spanish Jews, which is what the terms "Sephardic Jews" and "Sepharadim" properly implied when used in the ethnic as opposed to the religious sense.

In some Arabic countries such as Egypt and Syria, the Sephardic Jews arrived via the Ottoman Empire would distinguish themselves from the already established Arabic-speaking Jews known as Moriscos (Moorish-like in Ladino), in some others such as Morocco and Algeria, the two communities largely intermarried with the latters embracing the Sephardic customs and thus forming a single community.

In Arab nations (such as Morocco, Algeria, Tunisia, Libya, Egypt, Yemen, Jordan, Lebanon, Iraq, and Syria), Mizrahim most often speak Arabic,[3] although Arabic is now mainly used as a second language, especially by the older generation. Most of the many notable philosophical, religious and literary works of the Jews in Spain, North Africa and Asia were written in Arabic using a modified Hebrew alphabet. 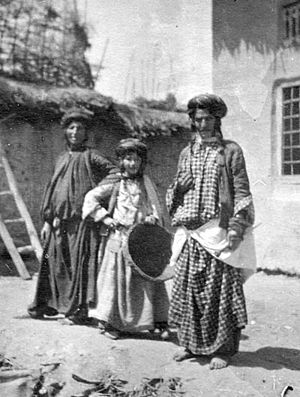 Neo-Aramaic is a Semitic language closely related to Hebrew. It is identified as a "Jewish language", since it is the language of major Jewish texts such as the Talmud and Zohar, and many ritual recitations such as the Kaddish. Traditionally, Aramaic has been a language of Talmudic debate in yeshivoth, as many rabbinic texts are written in a mixture of Hebrew and Aramaic. The current alphabet used for Hebrew, known as "Assyrian lettering" (Ktav Ashurit) or the "square script" (Ktav Meruba), was in fact borrowed from Aramaic.

In 2007, a book was published, authored by Mordechai Zaken, describing the unique relationship between Jews in urban and rural Kurdistan and the tribal society under whose patronage the Jews lived for hundreds of years. Tribal chieftains, or aghas, granted patronage to the Jews who needed protection in the wild tribal region of Kurdistan; the Jews gave their chieftains dues, gifts and services. The text provides numerous tales and examples about the skills, maneuvers and innovations used by Kurdistani Jews in their daily life to confront their abuse and extortion by greedy chieftains and tribesmen. The text also tells the stories of Kurdish chieftains who saved and protected the Jews unconditionally.[8]

By the early 1950s, virtually the entire Jewish community of Kurdistan — a rugged, mostly mountainous region comprising parts of Turkey, Syria, Iraq, Iran, and the Caucasus, where Jews had lived since antiquity — relocated to Israel. The vast majority of Kurdish Jews, who were primarily concentrated in northern Iraq, left Kurdistan in the mass aliyah (immigration to Israel) of 1950-51. This ended thousands of years of Jewish history in what had been Assyria and Babylonia.

Persian and other languages

Among other languages associated with Mizrahim are Judeo-Persian (Dzhidi), Georgian, Bukhori, Kurdish, Juhuri, Marathi and Judeo-Malayalam. Most Persian Jews speak standard Persian, as do many other Jews from Iran, Afghanistan, and Bukhara (Uzbekistan),[3] as well as the Mountain Jews of Azerbaijan and Russian Dagestan, who speak a dialect of Persian called Juhuri.

Some Mizrahim migrated to India, other parts of Central Asia, and China. In some Mizrahi Jewish communities (notably those of Yemen and Iran), polygyny has been practiced.[3]

After the establishment of the State of Israel and subsequent 1948 Arab-Israeli War, most Mizrahi Jews were either expelled by their Arab rulers or chose to leave and emigrated to Israel.[6] According to the 2009 Statistical Abstract of Israel, 50.2% of Israeli Jews are of Mizrahi or Sephardic origin.[9]

Anti-Jewish actions by Arab governments in the 1950s and 1960s, in the context of the founding of the State of Israel, led to the departure of large numbers of Mizrahi Jews from the Middle East.[citation needed] 25,000 Mizrahi Jews from Egypt left after the 1956 Suez Crisis, led to the overwhelming majority of Mizrahim leaving Arab countries. They became refugees. Most went to Israel. Many Moroccan and Algerian Jews went to France. Thousands of Lebanese, Syrian and Egyptian Jews emigrated to the United States and to Brazil.

Today, as many as 40,000 Mizrahim still remain in communities scattered throughout the non-Arab Muslim world, primarily in Iran, but also Uzbekistan, Azerbaijan, and Turkey.[10] There are few Maghrebim remaining in the Arab world too. About 5,000 remain in Morocco and fewer than 2,000 in Tunisia. Other countries with remnants of ancient Jewish communities with official recognition, such as Lebanon, have 100 or fewer Jews. A trickle of emigration continues, mainly to Israel and the United States.

Refuge in Israel was not without its tragedies: "in a generation or two, millennia of rooted Oriental civilization, unified even in its diversity,” had been wiped out, writes Mizrahi scholar Ella Shohat.[11] The trauma of rupture from their countries of origin was further complicated by the difficulty of the transition upon arrival in Israel; Mizrahi immigrants and refugees were placed in rudimentary and hastily erected tent cities (Ma'abarot) often in development towns on the peripheries of Israel. Settlement in Moshavim (cooperative farming villages) was only partially successful, because Mizrahim had historically filled a niche as craftsmen and merchants and most did not traditionally engage in farmwork. As the majority left their property behind in their home countries as they journeyed to Israel, many suffered a severe decrease in their socio-economic status aggravated by their cultural and political differences with the dominant Ashkenazi community. Furthermore, a policy of austerity was enforced at that time due to economic hardships.

Mizrahi immigrants arrived with many mother tongues. Many, especially those from North Africa and the fertile crescent, spoke Arabic dialects; those from Iran spoke Persian; Mountain Jews from Azerbaijan arrived with Azerbaijani; Baghdadi Jews from India arrived with English; Bukharan Jews from Uzbekistan and Tajikistan arrived with Tajiki; the Bene Israel from Maharashtra, India arrived with Marathi, Mizrahim from elsewhere brought Georgian, Judaeo-Georgian, Juhuri and various other languages with them. Hebrew had historically been a language only of prayer for most Jews not living in Israel, including the Mizrahim. Thus, with their arrival in Israel, the Mizrahim retained culture, customs and language distinct from their Ashkenazi counterparts.

The cultural differences between Mizrahi and Ashkenazi Jews impacted the degree and rate of assimilation into Israeli society, and sometimes the divide between Eastern European and Middle Eastern Jews was quite sharp. Segregation, especially in the area of housing, limited integration possibilities over the years.[12] Intermarriage between Ashkenazim and Mizrahim is increasingly common in Israel and by the late 1990s 28% of all Israeli children had multi-ethnic parents (up from 14% in the 1950s).[13] It has been claimed that intermarriage does not tend to decrease ethnic differences in socio-economic status,[14] however that does not apply to the children of inter-ethnic marriages.[15]

Although social integration is constantly improving, disparities persist. A study conducted by the Israeli Central Bureau of Statistics (ICBS), Mizrahi Jews are less likely to pursue academic studies than Ashkenazi Jews. Israeli-born Ashkenazim are up to twice more likely to study in a university than Israeli-born Mizrahim.[16] Furthermore, the percentage of Mizrahim who seek a university education remains low compared to second-generation immigrant groups of Ashkenazi origin, such as Russians.[17] According to a survey by the Adva Center, the average income of Ashkenazim was 36 percent higher than that of Mizrahim in 2004.[18]