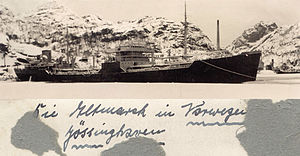 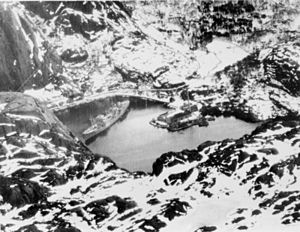 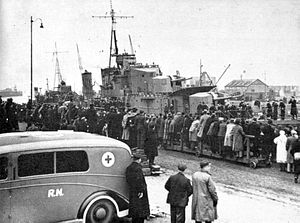 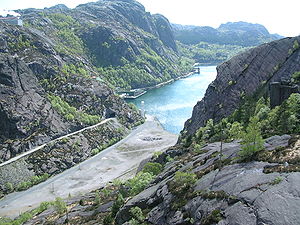 The Altmark Incident (Norwegian: Altmark-affæren) was a naval skirmish of World War II between the United Kingdom and Nazi Germany, which happened on 16 February 1940. It took place in what were, at that time, neutral Norwegian waters.[2] To date, it is the last major boarding action fought by the Royal Navy.[3]

In February 1940, the German tanker, Altmark, was returning to Germany with 299 British merchant sailors on board,[4] prisoners of war who had been picked up from ships sunk by the pocket battleship, Admiral Graf Spee. On its way from the southern Atlantic to Germany, Altmark passed through Norwegian waters. On the insistence of British contacts who had been pursuing the vessel, it was investigated three times on 15 February by the Royal Norwegian Navy. First, the tanker was boarded by officers from the torpedo boat, HNoMS Trygg, off Linesøy Island, then by officers from the torpedo boat, HNoMS Snøgg, in the Sognefjord, and finally personally by Admiral Carsten Tank-Nielsen and naval personnel from the destroyer, HNoMS Garm, in the Hjeltefjord. In each instance, the men who boarded the ship carried out cursory searches and took the Germans' word that the vessel was conducting purely commercial business. Following the third boarding, Altmark was escorted southwards by the torpedo boats HNoMS Skarv and HNoMS Kjell and the guard boat, HNoMS Firern. The British prisoners held in the ship's hold reportedly made strenuous efforts to signal their presence, although international law did not ban the transfer of prisoners of war through neutral waters. The Norwegian search parties, however, did not inspect the hold, and allowed the ship to continue on its way.

Altmark was then spotted off Egersund later that same day by British aircraft, which raised the alarm in the Royal Navy. The aircraft were stationed at RAF Thornaby, in the North East of England. After being intercepted by the destroyer HMS Cossack, captained by Philip Vian, Altmark sought refuge in the Jøssingfjord, but Cossack followed her in the next day. The Altmark's Norwegian naval escorts blocked initial attempts to board the ship, and aimed their torpedo tubes at the Cossack. Captain Vian then asked the admiralty for instructions, and received the following orders directly from the First Lord of the Admiralty Winston Churchill:

Unless Norwegian torpedo-boat undertakes to convoy Altmark to Bergen with a joint Anglo-Norwegian guard on board, and a joint escort, you should board Altmark, liberate the prisoners, and take possession of the ship pending further instructions. If Norwegian torpedo-boat interferes, you should warn her to stand off. If she fires upon you, you should not reply unless attack is serious, in which case you should defend yourself, using no more force than is necessary, and ceasing fire when she desists.[5]

The British government made no particular objection to the fact of a prison ship traversing neutral waters. In fact, in official papers regarding the incident, they noted the fact that the Royal Navy had done the same, for example in December 1939, when the cruiser HMS Despatch passed through the Panama Canal, which was neutral waters, with German prisoners aboard from the freighter Düsseldorf. But the crew of the Altmark had gone hundreds of miles out of their way to make the long run through Norwegian waters to Germany, constituting a clear abuse of Norway's neutrality, and a breach of international law. Besides, the Norwegian government had not permitted the Germans to transport prisoners through Norwegian waters (the Altmark having falsely claimed to be carrying none), nor had the crew been truthful regarding the nature of their cargo and voyage.

The Norwegian forces refused to take part in a joint escort, reiterating that their earlier searches of Altmark had found nothing. Vian then stated that he intended to board Altmark and invited the Norwegians to take part, but this was also refused. In the ensuing action, Altmark ran aground. The British then boarded her at 22:20 on 16 February, and – after some hand-to-hand fighting with bayonets and the last recorded Royal Naval action with the cutlass – overwhelmed the ship's crew and went down to the hold. One of the released prisoners stated that the first they knew of the operation was when they heard the shout "any Englishmen here?" from the boarding party. When the prisoners shouted back "yes! We are all British!", the response was "well, the navy's here!" which brought cheers.[6]

Seven German sailors were killed and eleven wounded, six of whom were seriously wounded and five less severely wounded. The German dead were buried in Sogndal Cemetery above Jøssingfjord.[7] This was used unsuccessfully as a defence by the Germans in the Nuremberg trials, as the British commander, rather than being tried himself, was decorated for the action.[citation needed]

HMS Cossack left the Jøssingfjord just after midnight on 17 February. The Norwegian escorts protested, but did not intervene. The official explanation later given by the Norwegian government was that, according to international treaty, a neutral country was not obliged to resist a vastly superior force.

The Norwegians were angered that their neutrality had been infringed, but they did not want to be dragged into a European war. Nonetheless, the Altmark incident sowed doubts about the Norwegian neutrality among the Allies, as well as in Germany. Both sides had contingency plans for military action against Norway, primarily to control the traffic of Swedish iron ore, on which the German armaments industry depended in the early stages of the war. The Altmark incident convinced Adolf Hitler that the Allies would not respect Norwegian neutrality[citation needed]. Hitler, who had decided on 14 December 1939 on the invasion of Norway, ordered intensified planning on 19 February 1940 for Operation Weserübung, the occupation of Denmark and Norway, which eventually took place on 9 April 1940.[8]

The Altmark incident gave the British a short-lived but sorely needed morale boost during the Phoney War. The incident also had a lasting propaganda effect in German-occupied Norway during the war, when the Norwegian collaborationist government tried to neutralise their nickname "quislings" by using the location of the skirmish, Jøssingfjord, to coin the derogatory term "jøssing", referring to pro-Allies and anti-Nazis. Their efforts backfired, as "jøssing" was immediately adopted as a positive term by the general public, and the word was banned from official use by 1943.

The phrase "the navy's here" became well-known, being used as the title of a book about the incident published shortly after; the publisher referred to "the simple statement which stirred the imagination of the world".[9] A popular song was written by Ross Parker and Hughie Charles which saluted the incident by comparing it with those of Drake, Nelson, Beatty, and Fisher.[10][11]